Sudan is currently undergoing a major transition following the April 2019 overthrow of Omar al-Bashir and subsequent establishment of a civilian-military transitional government in August 2019.

Since then, there have been renewed initiatives aimed at resolving the long-standing and deadly conflicts in Sudan, including in Darfur, and the two areas of South Kordofan and Blue Nile. In August the transitional government and several major armed groups signed a peace agreement that will open humanitarian aid routes into areas cut off by conflict. For the country to move towards lasting peace, a Sudanese-led approach that includes the voices and perspectives of civil society and learns from the lessons of the past is needed. Civil society has a vital role to play in creating and shaping opportunities for peaceful resolutions of internal conflicts and governance reform in Sudan.

Our work with the international community increases understanding of the complex challenges faced in Sudan. This ensures that projects and approaches to Sudan support Sudanese-led efforts toward peace rather than exacerbate conflict. 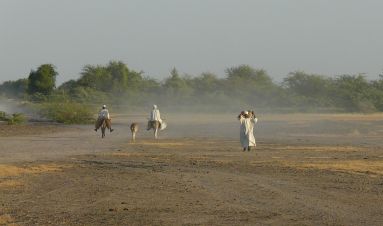 Towards Peace and Security in Sudan

Stay informed about our work in East Africa