A snapshot of life along the Azerbaijan-Armenia border

Communities on both sides of the border separating Azerbaijan and Armenia are vulnerable to shootings and landmines on a daily basis. Together with partner Humanitarian Research Public Union, Saferworld supported a photographer to travel to border communities on the Azerbaijan side to teach two villagers the basics of photography so they could raise awareness of the challenges faced by local people. A similar project was also carried out on the Armenian side of the border.

Zamin is a teacher who lives in Tovuz in Azerbaijan, only a short distance from the border with Armenia. Adding to the usual pressure of teaching young children, he also worries that stray bullets may come through the classroom windows or that sniper fire could disrupt the commute to school. For the last few decades, Armenia and Azerbaijan have been at war over the disputed Nagorno-Karabakh region, which both sides claim as their own. Life along the international border, less than a hundred kilometres west of Nargorno-Karabakh,  is fraught with tensions as well. “Living in a border village, close to a conflict zone, is totally different from ordinary life,” he said. “We have to adapt to extreme conditions.” 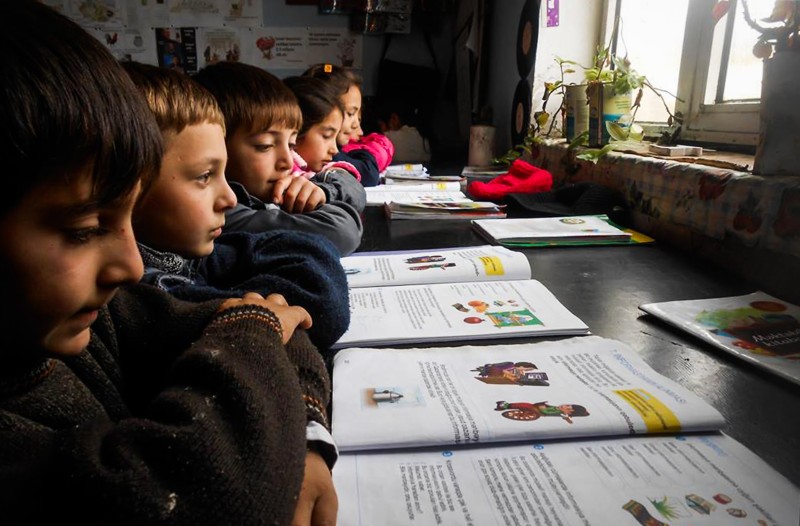 School children in Aghdam village, on the front line of the international border between Azerbaijan and Armenia. Photo: Zamin Askerov

“The main problem is the shootings,” said Ahad, a resident of Qazakh, another border village. “Whenever people take their cattle to the fields to graze them, they can be shot at. Sometimes the cattle cross over into Armenian territory and cannot be retrieved, or are shot or step on landmines. This makes it difficult for people to earn a living.”

To learn more about life along the Azerbaijan-Armenia border and to raise awareness of the conflict, Saferworld – together with Azerbaijan-based partner Humanitarian Research Public Union – commissioned Ahmed, a Baku-based photographer, to travel to these communities and train local villagers on the basics of photography.

“We wanted to get a clearer picture of what life is like for these border communities, told from their own perspectives,” said Natia Nadiradze, Saferworld’s Caucasus Project Manager. “We had already interviewed many of the residents for our research, but photography paints a different picture. And it’s a much better way to connect with people who don’t know much about the conflict and haven’t visited the region.” 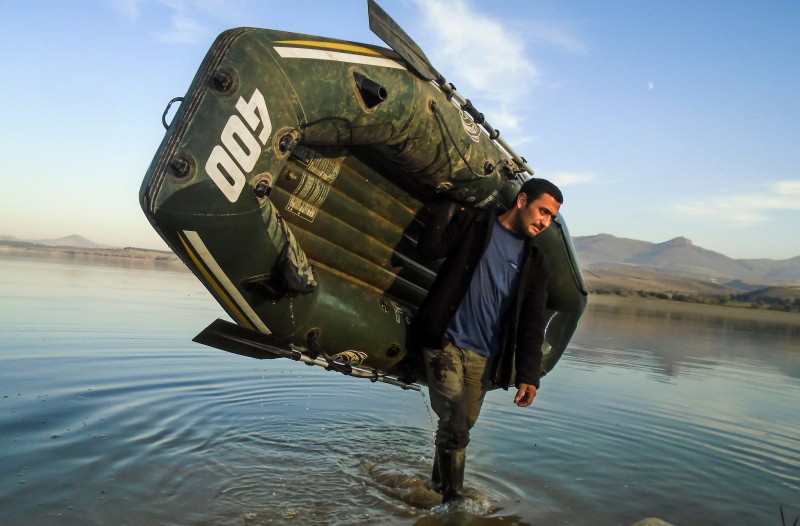 Having already worked with border communities in the past, Ahmed was happy to take on the job. “We invited around 20 people to the first training – from Tovuz, Qazakh and surrounding villages,” he said. “I started by finding out more about their previous experiences with photography, and then went over some basic skills and tips. At the end of this first lesson, I gave them an assignment to send me photos with captions every day. Most of them had to drop out of the training because they couldn’t dedicate enough time to the project, so we ended up focusing on Ahad and Zamin, who were some of the most enthusiastic and passionate of the group. They sent me dozens of photos to work with. I then began to provide them with more in-depth training materials.”

“I am raising awareness about the lives of people living in border villages, which is very interesting for me” said Zamin. “Because I am a teacher, I have focused more on life for school children. I hope to show the joy and sorrow of children living along the border.” 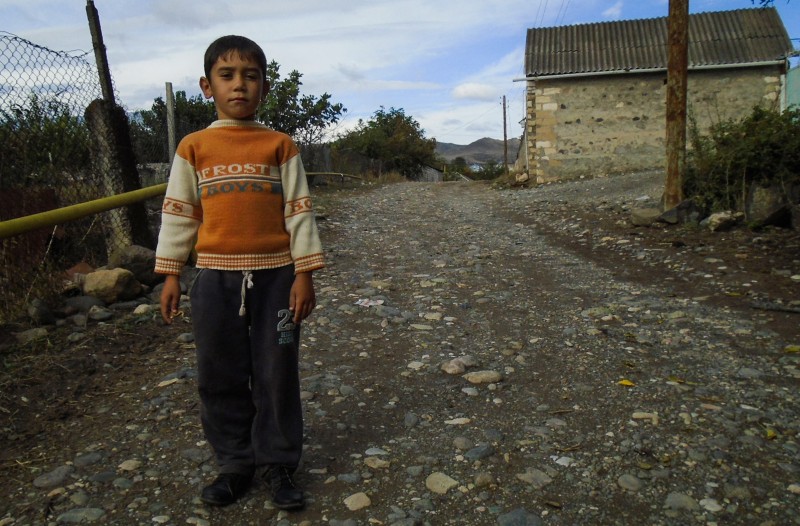 “I wanted to take pictures of villagers going about their daily lives, and put a human face to the long-standing conflict,” said Ahad, the other trainee. “Mainly harvesting, collecting potatoes and fishing. I also wanted to highlight some of the security problems, so that’s why I took photos of the bulletproof walls around the villages as well as houses damaged during the war.” 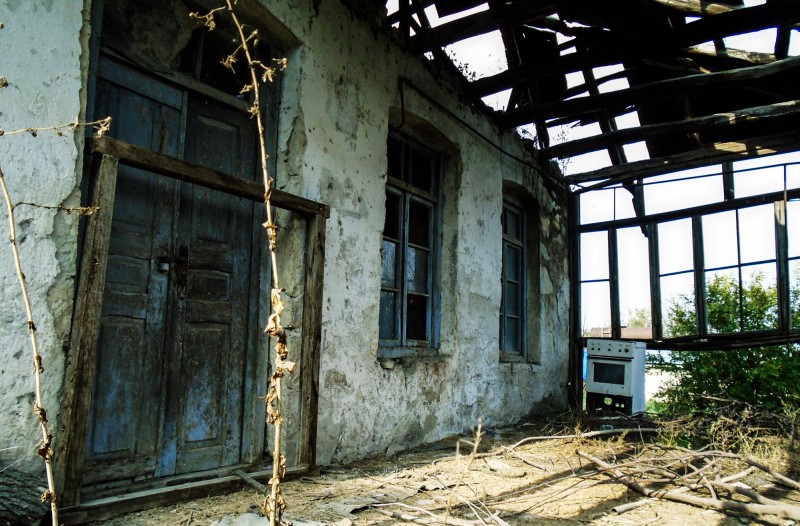 A house destroyed and then abandoned during the war in the early 90s. Photo: Ahad Askerov

“Ahad and Zamin really impressed me with their skills and enthusiasm,” said Ahmed, the trainer. “I told them that if they wanted to get good photos they needed to change their angles and think about lighting. I really saw how they took this advice on board over time, and they produced some excellent photos as a result.”

In between trainings, Ahmed kept in touch with the participants through social media. Villagers would post the photos they had taken recently to a private group, and Ahmed would provide feedback on what they had done well and where they could improve.

The photos have now been exhibited in Azerbaijan, Georgia and in Brussels, Belgium – where many EU institutions are based – and have been seen by authorities, civil society groups, EU member states as well as international organisations like the European Commission and the United Nations. A similar Saferworld-supported project on the Armenian side of the border in which school children were taught photography skills and provided with cameras was also exhibited in Yerevan, Armenia. Attendees mentioned that if it were not for the captions, it would have been difficult to know on which side of the border the pictures were taken. 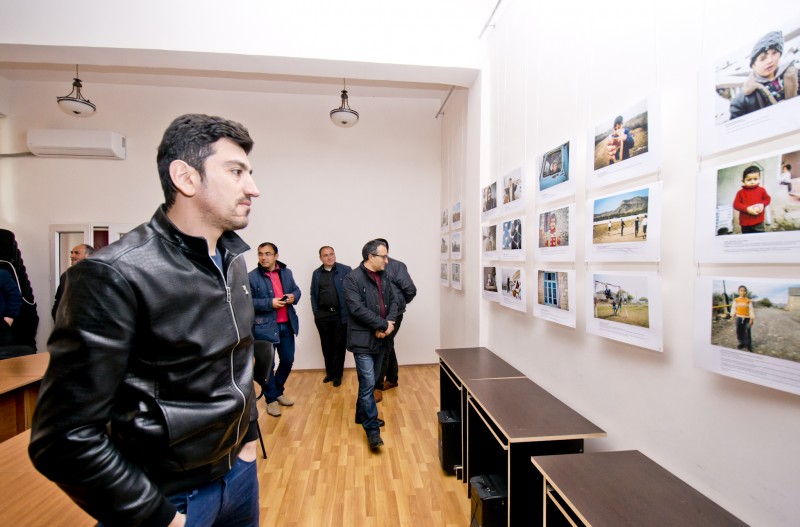 Ahad Askerov, one of the photographers, looks at some of his photos on display in Baku

“I hope that the photos I took will help raise awareness of life of people living in border villages,” said Ahad. “And on a personal level, I want to continue to learn about photography because I want to do it professionally.”

As for Ahmed, he has high hopes for his trainees. “I think they could continue to train others in their communities – perhaps as part of school classes,” he said. “I also hope that in the future, they can connect with media who might be interested in using their photos. They have an advantage, because they are local residents and people know them – and they also don’t have to get special permission from the authorities*.”

Zamin also hopes to continue learning about photography. “My goal is to be a professional photojournalist to show the effects of conflict on people’s lives. We are humans – we also live and exist. Knowing that people can see us and the challenges we face gives me hope.”

View the full gallery below:

The participatory photo project was part of a wider Saferworld cross-border community security effort that brought together community representatives from both sides of the international border to discuss common challenges, build understanding and come up with potential solutions. The resulting recommendations were directed at a range of actors – from politicians and local authorities to national media and international organisations.

Find out more about our work in Europe and Central Asia.