In Osh, Kyrgyzstan’s second largest city, a group of young peacebuilders were trained in filmmaking as part of a Saferworld and Foundation for Tolerance International (FTI) project to support young people to take on issues they perceive are important for their security. They chose to raise awareness of the challenges around getting an education by making a short film stressing the importance of education for all – regardless of ethnicity, religion, age or gender.

“I’ve heard many times from older generations that if they could go back in time, they would get a better education”, said Islam Torezhanov, a 19-year-old from Osh. He is one of several young peacebuilders who filmed a short video with the message: ‘Every child has the right to education.’

“I want to motivate young people not to drop out of school”, he said. “I believe the future of our country depends on it.”

After independence in 1991, people in Kyrgyzstan went through a turbulent period. The transition from the Soviet system to a free market economy was not easy, and many families struggled financially. Children and young people were pulled out of school to work or support their families, and girls were often married at younger ages. Children of labour migrants and those living in rural areas increasingly missed out on schooling, while the revival of more conservative religious values meant that education for girls was not prioritised as it was for boys.

“Many students still face pressure from family members, friends and others who prioritise earning money over personal development”, said Nigora Sherkulova, another co-creator of the film from Kara-Suu town. “Parents play a major role in the development of young people, but often they do not see the importance or the need for education of children. Through this video, we wanted to show parents the desire of children and young people in this country to develop. And we also wanted to show the benefits of schooling – for example, that children will not be as likely to work on the black market or be influenced by recruiters for violent groups. They will know and assert their rights, and will pass along their knowledge to the next generation.”

Nurtilek Hashimov, 13, from Navoi School was one of the students interviewed for the film.

Under the project, the filmmakers were trained as ‘youth delegates’. They decided that this issue was one that was related to so many other security and safety challenges in Kyrgyzstan and was something they wanted to address. Together, they came up with filming locations and storyboards, and identified students they wanted to interview on camera.

Preparations took around a month. The delegates set up several meetings to settle on a topic and come up with a script. They then met with representatives of the district education department and the school administration to explain the purpose of the video and to get permission for filming. With the help of a professional camera person and a journalist from the channel ‘Yntymak TV’ – who helped them develop a brief, write the script, create a storyboard and conduct interviews – they filmed in two schools.

“I liked the goal of the video,” said 13-year-old Nurtilek Hashimov, who featured in the film. “The most interesting questions for me were ‘why do you come to school?’ and ‘should girls get the same education as boys?’. These questions made me rethink some of my ideas and beliefs.”

Gullola Umaralieva, 16, emphasised the collaborative feeling of filming. “I liked the atmosphere when shooting the video. Everyone supported each other, despite differences in age, ethnic or religious background.” 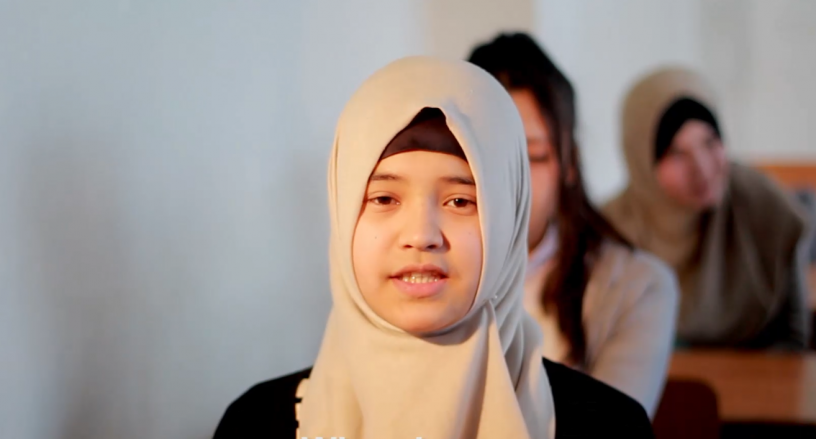 Gullola Umaralieva, 16, is a student at Navoi School in Aravan town.

Others, like 10-year-old Aliya Asilbekova, had to overcome initial nerves: “During filming, I was nervous in front of the camera. It was the first time I’ve been on film, so I felt a great responsibility and tried to convey my thoughts in a way that was understandable to others.” 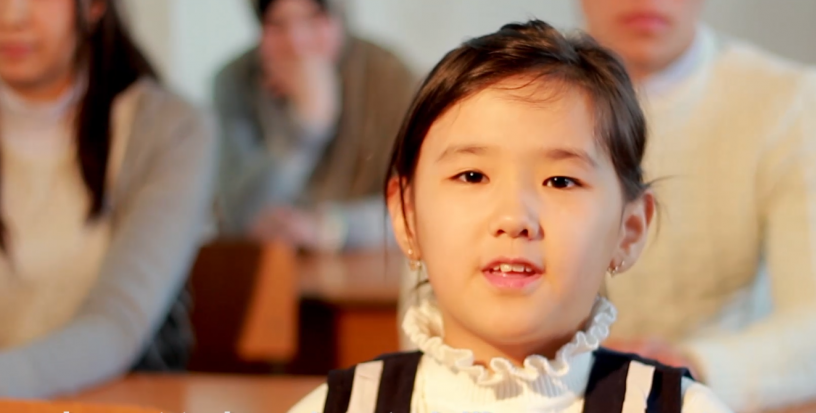 Aliya Asilbekova, 10, is a student at Navoi School in Aravan town.

The young delegates in charge of filming are taking on the issue of education in other ways, too. “We collected signatures of parents and local government officials and sent a letter of appeal to the Ministry of Education about opening a vocational school”, said Nigora Sherkulova, 22. “We also opened a street library in the city park near our community crime prevention centre[1], to increase interest in reading.” These efforts have also brought together students from different backgrounds to pursue a common goal.

“Before filming, we did not know each other,” said Lailo Shermatova, a 16-year-old interviewee in the film. “Now we are friends. Maybe we will set an example for others, so that they can talk to each other and to their parents about their hopes and dreams about how a good education can help them achieve their goals.”

[1] Local Crime Prevention Centres are usually made up of one or two representatives of the aksakals (elders’) court, the youth council, the women’s council, and community leaders (known as domkoms or kvartalnyi) who work closely with local neighbourhood inspectors. Membership of LCPCs varies from region to region, however they are usually made up of no more than ten people.