Agents of change in Sudan

In Sudan, decades of instability led to a revolution in 2019 that saw Sudanese people and civil society peacefully reclaim their voice. Now the country is at a turning point. As the transitional government builds a path for the future, citizens of all ages and backgrounds across the country are working to improve their lives and create peace in their communities.

In conflicts and crises, community-led groups and civil society organisations are the first to respond to the needs of people – yet are often neglected by donors and unable to access resources. In 2019, Saferworld began supporting Sudanese civil society through providing training and small grants* to conduct projects that promote peace, tolerance and inclusion, and which tackle existing issues of conflict. The grants aimed to support small organisations to mobilise communities and increase the participation of women and young people in peacebuilding projects, and contribute to an inclusive, democratic and peaceful Sudan.

Before providing the grants, Saferworld worked with civil society groups to identify major issues of conflict and injustice in their areas. Organisations then submitted their proposals on how they would use the grant, and we conducted a selection process to assess the scope and potential of each project, ensuring diversity in theme, geographic reach and size. Grants ranged from USD$3,000 to $49,000 for projects lasting from three to six months. After the grants were given, Saferworld supported and mentored partners and groups on how to use the grants to implement their own micro-grant projects for communities, and organised events to share and exchange learnings. By the end of 2020, over 200 citizen-led projects with different priorities had begun.

We take a look at three different examples of how the grants have made a difference to communities in two areas of Sudan: the Nuba Mountain region in South Kordofan and Khartoum.

Opportunities for people with disabilities 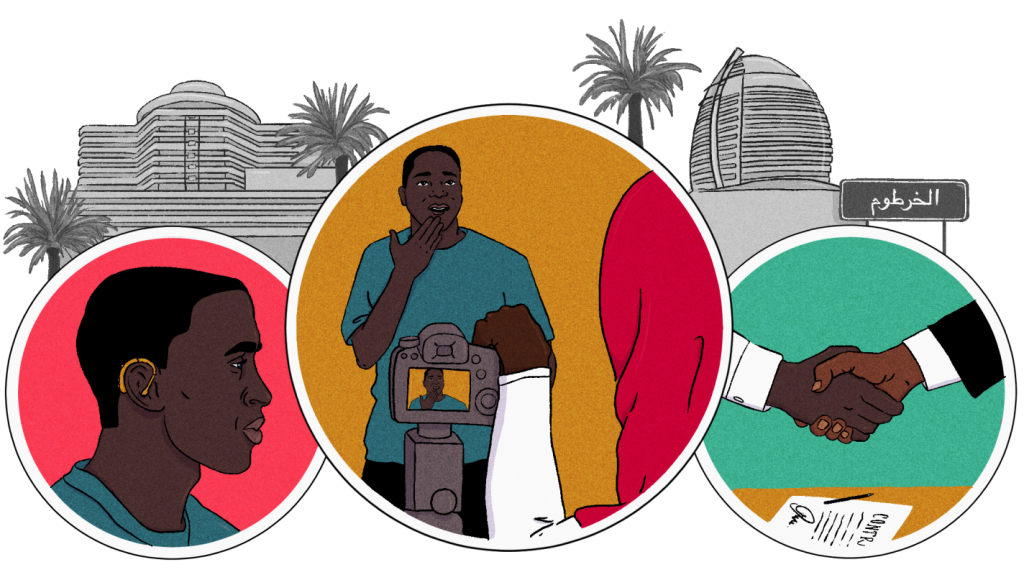 “My name is Mohamed Osman, I am 23 years old and I live in Omdurman. I’m living in a rented house with a family of six; me and my five sisters. Myself, and three of my sisters were born with hearing disabilities, which is considered a genetic issue from my grandmother. My sister has a hearing disability and she is very smart and successful in her academic career. She wanted to be a doctor as she has loved medicine since her childhood and that was her big dream. Unfortunately, she couldn’t achieve it as there was no college that could admit people with disabilities and offer special teaching for them. Young people aren’t getting jobs that match their qualifications.”

Like Mohamed, people with disabilities, including those with hearing impairments, often face exclusion and increased difficulties in day-to-day life in parts of Sudan. To address this, Adeela For Culture and Art – a non-profit project founded by young people in 2018 – proposed to use its grant to help young people to use art, media and role play to speak about their experiences, promote peace and co-existence, and to raise awareness of challenges they face in their community.

Adeela invited youth groups to apply for micro-grants, and over three months received 196 proposals. 28 of the applicants were successful, and each received a USD$600 micro-grant from Adeela for their projects. One successful applicant was Silent Art Youth Group, a collective of 35 young people with hearing impairments, who were keen to produce a short film on the challenges they face in daily life. They highlighted a lack of formal employment for young people with disabilities, despite their graduate status or qualifications, and other social challenges like limited marriage opportunities. After the film was produced, Silent Art organised a screening event and invited various community members, including employers and company representatives, government officials and other influencers. After seeing the film and learning about the difficulties people with disabilities face in finding employment, leading pharmaceutical company AMIPHARMA provided jobs to four young people with hearing impairments, including Mohamed.

“I feel very happy with the offer, as I started feeling that my life has changed to the positive, I’ve even made a plan to marry soon. I feel delighted because now I can contribute to the family’s expenses. Because I feel the change, I started inspiring the people who have my same disability to not give up,” he explains.

At the same event, famous Sudanese YouTuber Amori and popular singer Ahmed Fath Allah made a pledge to include sign language in all of their work, making their content accessible to audiences with hearing impairments. It is hoped that the use of sign language by influential figures will bring more attention to the needs of people with disabilities. 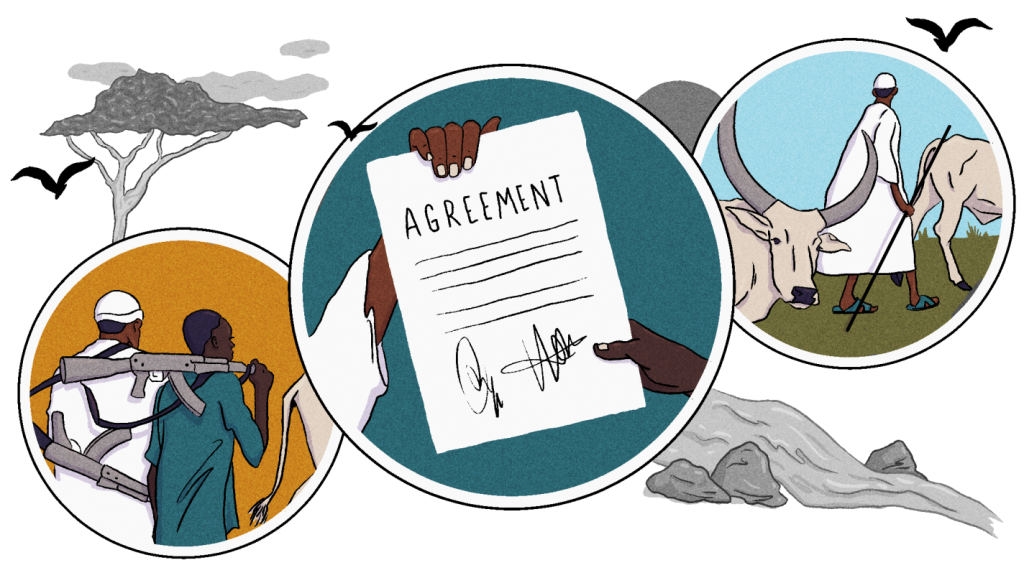 In the Nuba Mountain region in South Kordofan, historic tensions between nomadic pastoralist Arab communities and Nuba farming communities in Habila County have led to violence over ruined farm land and the use of common resources such as water for cattle.

Nuban land in South Kordofan is relatively rich in vegetation and water, while droughts affect North and Western Kordofan. As a result, the fertile Nuban land attracts many groups of nomadic pastoralists in search of pasture and water for their cattle. The pastoralists, supported by the government, are usually armed when they travel and use the Nuban land, and they often ruin the farms they use. This causes conflict with the Nuba community, some of whom are from areas controlled by the Sudan People's Liberation Movement (SPLM), adding a political dynamic to the disagreement. In Habila County, nomadic Arab Darrnaalea communities have been in a lengthy conflict with the Nuba Wauncho tribe, often resulting in casualties. The most recent round of fighting resulted in the killings of four people, including a local chief, and a mosque was destroyed by fire.

“We nomadic Arab communities have been indoctrinated by government propaganda to incite violence with the Nuba tribes in the Nuba Mountain region. We have been given more rights to live, when a Nuba person is killed, we are not held accountable,” explains Fatima Subahi Osman, 42, a woman representative of various tribes of Arab ethnicity.

Nuba Relief Rehabilitation and Development Organisation (NRRDO) used its grant from the project to provide training and support to the Habila Youth Charity Association (HYCA), which led a reconciliation process between the Daarnaalea and Wauncho communities. Between September and October 2020, HYCA hosted a series of meetings that brought together the communities to peacefully discuss their grievances and come up with an action plan to resolve the conflict. Despite initial tensions, both parties felt a sense of ownership of the mediation process and felt comfortable cooperating with each other.

As a result of the meetings, the Daarnaalea communities paid compensation to the Wauncho tribe for deaths relating to the conflict and for the destruction of farms. The two parties also agreed on terms and conditions to allow Arab cattle keepers to peacefully pass through Nuba land during cattle migration. The agreement states that cattle keepers cannot carry guns; they must take care of Wauncho farm land and only use the grazing land when passing through; and Wauncho youth must provide protection for the cattle keepers as they pass through.

Thanks to the agreement, the Daarnaalea have peacefully been able to pass through and use Nuba lands for grazing their cattle, under the guard of young Wauncho people in the community – a significant achievement in the county. The two parties officially signed the agreement on peaceful coexistence in October 2020, and there have been no reported incidents of fighting or killing between them since.

“There is calmness, acceptance and stability for the Nuba people. There is total acceptance from the Wauncho Nuba tribe of the Arab communities because the Arabs have acknowledged that the Nuba Mountain region belongs to the Nuba people. No more lootings and farm destruction, no bloodshed”, Abdullah concludes.

Standing up to practices of gender-based violence 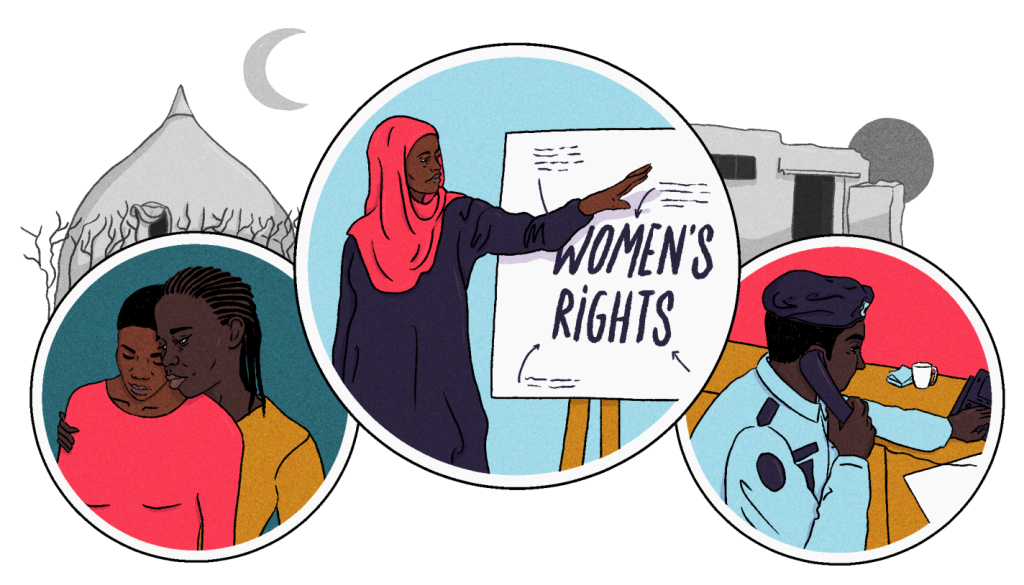 “Where I grew up, I saw the role of women as mostly taking care of the home, children and doing agriculture activities. Women have much experience in house management, handcraft and selling food. But women face a lack of education, they aren’t aware of their rights, there are restrictions to movement where [we] can’t travel or move in public spheres without permission, and can’t access employment”, explains Omnea Elsayed, a 17-year-old student from Gedarif.

Women’s rights and protection was a recurring theme in many projects proposed by Sudanese civil society. Khartoum-based organisation Women’s Wings used their grant to support the Young Women Rights Initiative (YWRI), a collective of women activists in the Al Fath area, to host workshops in the community on women’s rights and raise awareness of harmful gendered practices. After one workshop on child marriage, Omnea was able to speak to her partner and family about her planned marriage and convinced them to delay it until she was older and certain about the decision to marry. Omnea explains, “I was very scared to talk to them about this, as usually, girls don’t have the right to decide or even to talk when a parent decides about anything. But, I was encouraged and felt confident when my partner listened to me. I feel more encouraged to even continue studying beyond the secondary school level.” YWRI hopes this result will serve as an example for other young women and men to campaign against child marriage and speak up for their rights.

After another YWRI-led workshop on human rights and women’s empowerment, participants formed new groups to share information, passing on what they had learnt and sharing it within their communities. In total, they shared information with over 240 women in three weeks. After workshops on female genital mutilation (FGM), one woman was able to stop a planned FGM procedure by reporting the case to the police. Not only did this stop a harmful procedure taking place, but it also alerted law enforcement that the threat of FGM procedures is present in the area.

In the Nuba Mountain region in South Kordofan, NRRDO supported a women’s initiative, the Mama Women Association, to hold awareness-raising sessions on FGM practices with the Lumrik tribe of Lagawa County. After the training, the community decided to implement efforts to end FGM practices and prioritise sending girls to school.

Back in Khartoum, a different women-led initiative, Freda – supported by Adeela – hosted a two-day workshop on raising awareness about sexual violence, assisting rape survivors and providing psychological support. In attendance was the mother of a young girl who was experiencing sexual harassment and violence from an elder family member. During the workshop, the mother learnt about paths to helping victims of abuse and shortly after confronted the perpetrator with the support of her community. She also took her daughter to seek psycho-social support. This was a significant breakthrough due to a customary lack of reporting to protect perpetrators in the family.

These stories illustrate the power of Sudanese people and civil society to bring about changes in their day-to-day lives, from resolving conflict to acting on injustices. We firmly believe these groups are best placed to create meaningful changes due to their expertise in understanding the context and culture of each community and their ability to solve problems using solutions that are not externally imposed. Our project has also highlighted how civil society is better equipped to adapt project activities to changes in the context, and to use their established networks to make a bigger impact.