“Living in Gudele Block 9 was a nightmare”: people and police working together for better safety and security in Juba

The conflict that erupted in Juba, South Sudan in July 2016 had devastating effects on people’s lives - especially their sense of peace and security. Four years since the conflict, there was still no functioning police station in Juba’s Gudele Block 9, adding to the insecurity. Reopening a police station has helped communities in the area restore peace and security among many residents.

Gudele Block 9 – one of Juba city’s 51 residential areas – was the worst hit area during the conflict between the in-government and in-opposition factions of the Sudan People’s Liberation Movement. Because of its close proximity to Jebel Kujur – the epicentre of the 2016 conflict – Gudele Block 9 became another hotspot, causing many of its 80,000 residents to leave. However, there were also many residents who chose to stay. Eliezer James, a resident in Gudele Block 9 said that “Some people had no choice during the 2016 conflict but to stay here. We had nowhere to go. The fighting was widely spread across Juba so any unnecessary movement could be dangerous”. During that time, police officers also deserted their duties and left the Gudele Block 9 station after not getting paid and without easy access to food as the conflict worsened. Residents who decided to stay no longer had anywhere to report crimes to.

The lack of police presence in Gudele Block 9 caused many insecurities for the community. People reported they could not sleep at night due to fears of robbery. Crimes, including gun fights, rapes and murders were on the rise. “During the conflict and before the police station was reused, living in Gudele Block 9 was a nightmare. Gunshots could be heard at night, armed robbery and raping of women and girls including killings also occurred. Youth gang activities were rampant. Shops would close early because of insecurity. In general, people’s sense of security and peace was threatened,” said John Ladu, a local priest.

“During the conflict and before the police station was reused, living in Gudele Block 9 was a nightmare. Gunshots could be heard at night, armed robbery and raping of women and girls including killings also occurred."

Saferworld and the Organization for Non-violence and Development (ONAD) began running community security and peacebuilding projects in Juba in 2014. But after the 2016 conflict, we decided to focus on Gudele Block 9, guided by the findings of our community security analysis and recommendations from local authorities. Even four years after the conflict, our analysis still found that the lack of a police station was driving insecurity in Gudele Block 9. There were attempts to reopen the police station but none of them were successful. With the nearest police station 3 kilometers away from the community, residents felt helpless with nowhere to report crimes, especially during emergencies. What was once a vibrant community was left without any security and traumatised by violence and crime.

It was during one of these monthly meetings that Gudele Block 9 community members met with Colonel Cerelino Jedo, Head of Community Policing at the Central Equatoria State, Colonel James Dak Karlo, the Deputy Spokesperson of the SSNPS, Vizilio Kose the Director of Munuki Block Council and Ernest Yeboah, UNDP’s Governance and Rule of Law Adviser. During the meeting, people in Gudele Block 9 advocated for police officers to be deployed to their area and to refurnish and reuse their local police station building.

As results of the advocacy by Gudele Block 9 community action group members and with the support of Colonel James Dak Karlo, the SSNPS of Central Equatoria State deployed 20 police officers to the Gudele Block 9 police station. UNDP donated two pick-up trucks and equipment to furnish the station (including laptops, office furniture and electricity). Aside from putting the station back in operation, SSNPS also turned it into a special protection unit complete with a gender desk so that sexual and gender-based violence cases can be handled in the station. 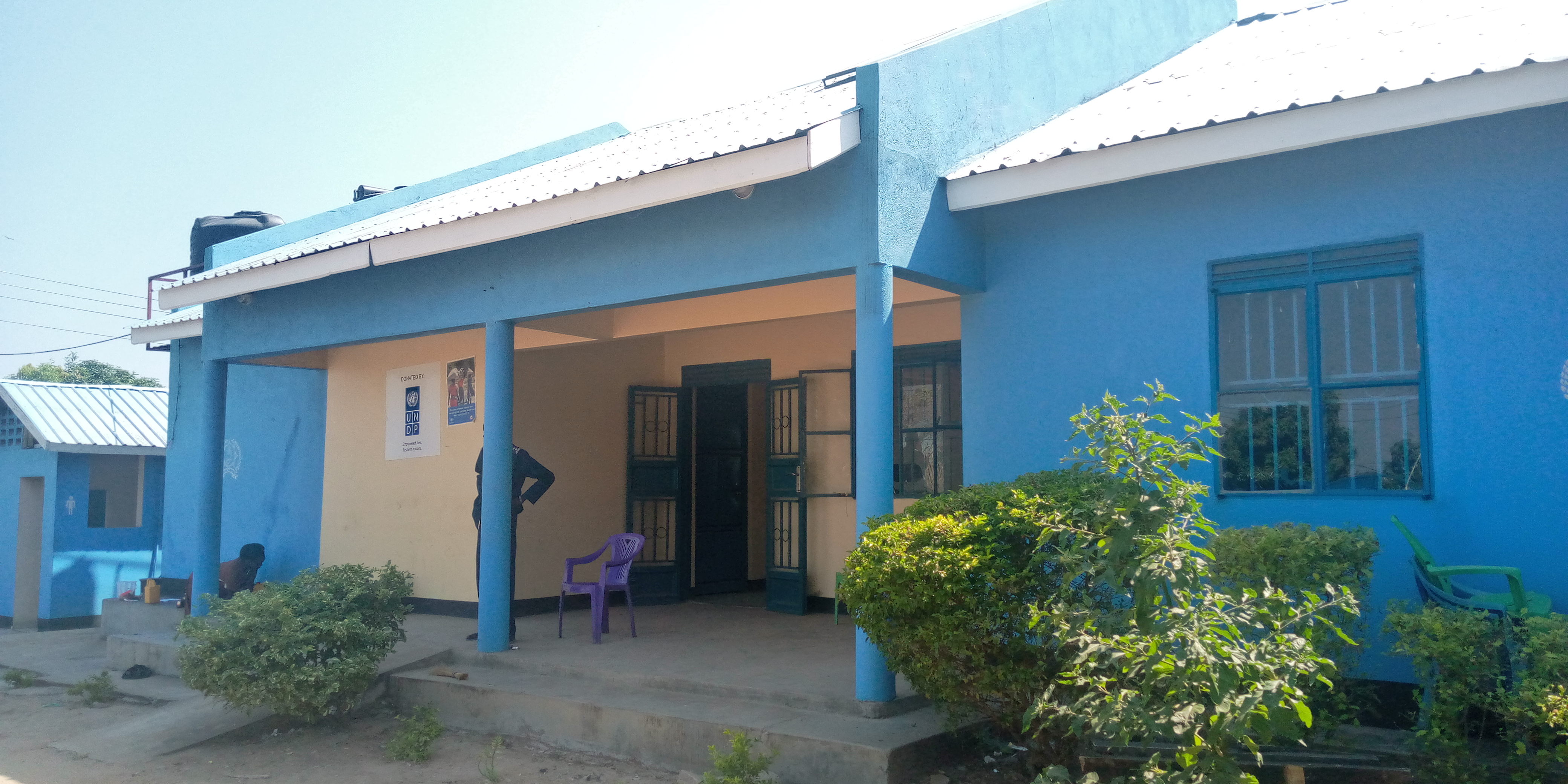 This move is celebrated by the residents of Gudele Block 9, who see the reopening of the police station as a big achievement. People who used to distrust the police are now more willing to work together with the SSNPS to create a safer community. Police officers are also listening more to community members, even giving their personal contact numbers so that people can easily reach the police whenever they witness a crime or fighting in the area. This would not have been possible without the advocacy of Gudele Block 9 community action group members and the fact that some people decided to stay, effectively preserving the police station building. Looters and criminals could not destroy the building because it was protected by the community surrounding it. 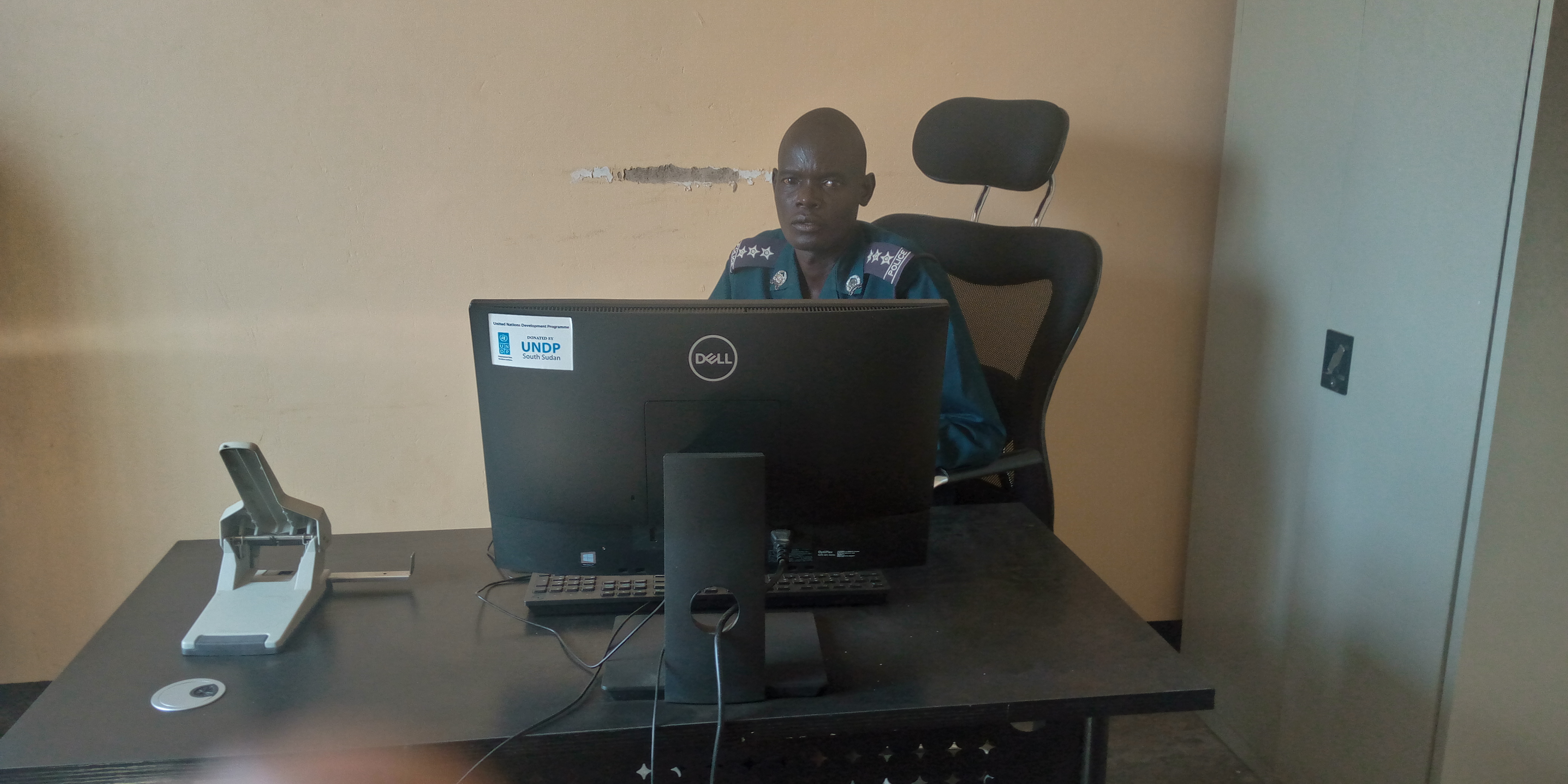 A police officer in Gudele Block 9 station, working with a computer donated by UNDP.

"The sense of peace and security has been restored in Gudele Block 9 after the police station has been reutilised."

David Orye – a Gudele Block 9 action group member said “We are happy and excited that the authorities and international organisations have finally taken actions to demonstrate their commitment towards maintaining peace and security in our area by deploying police officers as well as providing logistical support to facilitate the work of the police”. David noted that this was the first time that communities were able to influence decision makers and UN agencies to provide necessary support to improve security in Gudele Block 9. He also said that this success helped to motivate community members to continue working together to improve security in the area.

Another action group member, David Oryam, stated that “The sense of peace and security has been restored in Gudele Block 9 after the police station has been reutilised. People now feel safe to sleep outside in their compounds as the police conduct patrols twice a day around the area and the number of crimes has reduced. These developments came as a result of cooperation between the communities and the police.”

The work referred to in this piece is part of a project on peace and resilience in South Sudan, funded by the European Union.