Muhammadnasim is a 20 year-old student and youth activist actively involved in social initiatives in Vahdat, including a Saferworld-run skills-building ‘youth camp’ for young people. We spoke with him to hear about how he is working to address some of the issues that young women and men face in his community.

Despite the fact that you can drive from Vahdat district to Tajikistan’s capital, Dushanbe, within an hour, it is still considered one of the most vulnerable areas of the country. As well as its multiple appearances in the headlines following periods of instability, in conversations with communities we heard that there are also many concerns over the prevalence of gender-based violence and worries that support for violent groups is growing.

As part of Saferworld’s project on preventing violence against women and girls in Tajikistan, we spoke with young people in the region. Many said that young women and men often feel frustrated because of a sense of exclusion from decision-making, the high unemployment rate, and a tendency among older generations to blame problems on young people. According to our assessments and conversations with residents, this sense of injustice and exclusion had resulted in higher vulnerability to recruitment into violent groups, an increase in crime in the area, and also higher rates of gender-based violence. 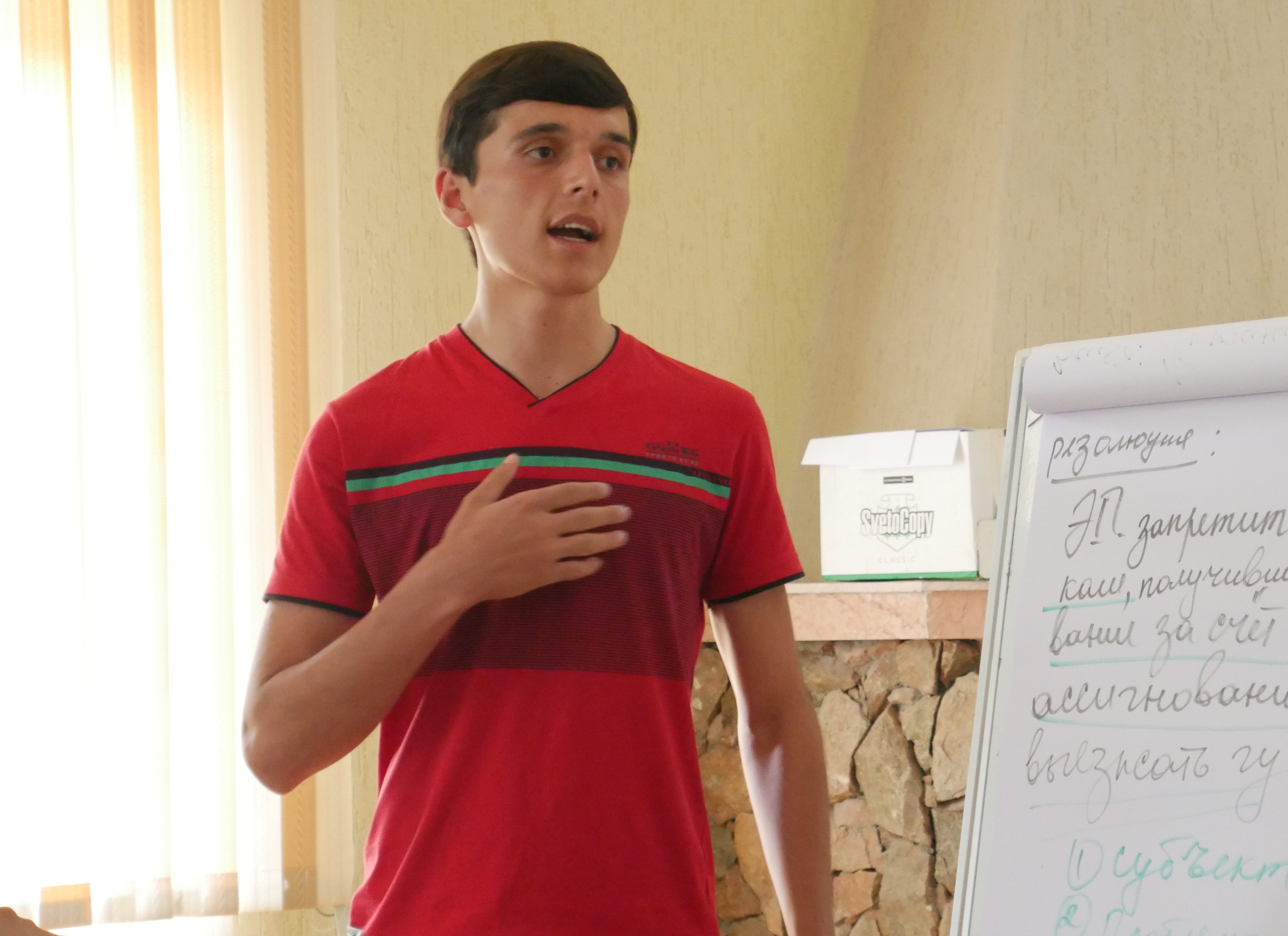 Muhammadnasim presenting during the youth camp.

How did you become involved in youth activism?

Two years ago I finished secondary school and started university in Dushanbe. During my studies there I realised that within the university’s programme I could not gain knowledge and skills needed for my growth – in particular those needed to address my community’s needs. Fortunately, during my studies in Dushanbe I met many people with different ways of thinking and different lifestyles, who were more educated and skilled than me. Most of them had been engaged in extracurricular activities. So I decided to take part in the university-led and government-led platforms for youth, which helped me grow. Later on I thought that it was not sufficient and decided to move forward. I continued my learning by taking part in youth-focused initiatives led by international organisations, which helped me look more closely at issues from a range of different perspectives. Combining these skills with my knowledge of my hometown helped me come up with ideas to address the needs of my peers and community.

Why do you think young people are often blamed for insecurity?

Young people are full of enthusiasm and energy, but are not always experienced enough to take on some issues. The older generation often blame youth for all the bad things instead of trying to understand and listen to them. Youth are not involved in development of solutions. There are also limited opportunities for them to find work, to have their voices heard, or to have their concerns addressed. Many are forced to look for other alternatives, and that makes them an easy target for various criminal or violent groups. Because the underlying causes of this vulnerability are not considered, they are still left unaddressed.

What are some ways to engage young people in addressing community security issues?

Education has always been important to help resolve most challenges faced by society. Compared to other countries, in Tajikistan access to education is relatively good. International organisations also provide a number of educational opportunities for our youth. Unfortunately, young people have limited opportunities to practically apply the knowledge and skills they acquire. This problem should be addressed. It’s not enough to just build skills, but young people should also be able to apply them to achieve their full potential. This will keep them from resorting to crime and violence.

What was your experience with the skills-building ‘youth camp’?

The youth camp I attended with my peers equipped us with practical skills. For example, after we had identified problems in our community – such as vulnerability to recruitment into violent groups, corruption, gender-based violence, low quality of education, or high crime rates among youth – we were taught how to develop our own action plans to address them. We had mentorship trainings and received funding to implement our action plan on preventing youth crime locally.

I need to highlight that in some cases, social norms in our communities may perpetuate problems – to address them we need to broaden our horizons. For me personally, my participation in the youth camp built my knowledge on peace and security, which helped me get selected to attend the Younithone [a regional youth programme organised by the United Nations Development Programme] event in Bishkek, Kyrgyzstan. I saw this as a personal achievement as well as opportunity to broaden my own horizon.

Comprehensive and high-quality education paired with opportunities to realise and achieve your full potential play a crucial role in addressing community security issues in our communities.

What are your future plans?

After participating in the camp, I realised that I had chosen the wrong profession. I had originally studied information technology, partly because my father wanted me to. But then I realised that I wanted to study law and become a lawyer. So, I changed departments and now I study at the law department of my university.

I want to be a peacebuilder and human rights activist working to promote respect for human rights in Tajikistan. I plan to work for law enforcement agencies and share my knowledge and expertise with future colleagues, and together we can jointly help people in vulnerable communities.

In Tajikistan, Saferworld is working with young activists to build safer communities under a United Nations Development Programme-funded project. Within this project, ‘Youth for a safer world’ is a youth initiative launched in 2019 to equip young people with knowledge and skills to address community security issues based on principles of inclusivity, equality and fairness. The initiative also seeks to create space for more meaningful inclusion of young people in decision-making processes related to peace and security by providing mentorship, financial support and advocating for including young women and men in different decision-making platforms.