After decades of civil war, Nepal is on the path to long-term peace and stability despite the devastating 2015 earthquake and a shifting political landscape. Building on networks developed as part of Saferworld’s Capacities for Peace project that concluded in February 2016, Nepali civil society partners continue to play a critical role in sustaining peace.

In September 2013, Saferworld began a project to support the work of peacebuilders across a number of contexts around the world and to build the skills and capacity of civil society working for long-term peace. By setting up and strengthening appropriate early warning, early response (EWER) systems, the project sought to link early signs of conflict with analysis and appropriate responses from those who live and work in affected areas. Although the project ended in February 2016, in Nepal it has taken on a life of its own, sustaining previous work on early warning, early response and maintaining important civil society networks.

In Nepal, where political, economic and environmental instability have elevated the importance of community voices, this project has continued to have an impact. The transition from a centralised government to a federalised system that seeks to address the country’s regional differences and administrative priorities has been a slow process that continues to raise fresh challenges. Despite constitutional provisions that are inclusive of women and ethnic minorities at all levels of the state, various social and political groups continue to mobilise and protest against the new constitution. In the two years since the promulgation of the constitution, protests in various regions across the country have led to violence, resulting in more than 50 deaths and hundreds of injuries.

In order to track, prepare for and respond to such incidents and the underlying factors that drive them, Nepali civil society has been leading efforts to address and mitigate local conflicts through dialogue, negotiation and trust building. The Capacities for Peace programme was designed to enhance the skills of civil society organisations (CSOs) to further their impact and role in national peacebuilding and to encourage increased collaboration between civil society groups. The success and sustainability of this approach is evidenced by the ongoing work that Saferworld and partners - NepalMonitor/ COCAP, Nepal Madhesh Foundation, Mid-Western University’s Conflict and Peace Studies Department, Peace Action Group (Ilam) and MAHURI Home Nepal - have continued to build on since the project finished last year.

Nepal’s Capacities for Peace initiative identified civil society people and groups with the potential to contribute to the programme and develop the skills and knowledge needed for EWER and conflict analysis. From academic institutions and think-tanks to international and regional level activists, individuals and organisations from different sectors were chosen to cover Nepal’s diverse geographic landscape, populations and contexts.  The project organised several workshops and trainings to hone their research and analytical skills, in addition to creating an EWER trend analysis report on a quarterly basis. Seven key themes for reporting incidents were identified: governance; social cohesion and tension; political mobilisation; transition and access to justice; resource based conflict; earthquake aid management; and trends.

Saferworld partnered with COCAP and their online platform called NepalMonitor.org to compile and publish the conflict trends analysis reports on a quarterly basis. By using the database to record conflict trends, the project supported the platform by providing these quarterly analysis reports that pooled assessments of Nepal’s conflict and security issues. You can find these reports under the blog section of NepalMonitor.org.

With a low chance of receiving long-term funding, local leadership, ownership and relevance to people living in Nepal became increasingly vital to the programme’s success and sustainability. Today, with partner support, NepalMonitor.org/ COCAP and Saferworld continue to collect conflict analysis reports on a quarterly basis from civil society and academic organisations across different regions and districts, and release trend analysis reports on their websites. The reports are collected from CSOs based in the five development regions of Nepal and an additional one for the Terai region to ensure that the analysis draws on information and perspectives from all parts of Nepal.

Nepali CSOs worked together to design the format and come up with the thematic categories that make up the quarterly reports. This was in response to a recognised need for joint conflict analysis to be publicly and widely available, with accessible language for Nepali peace and development practitioners. They continue that commitment today, self-funding conflict analysis reports as a contribution to sustainable peace in Nepal.

The process of producing these reports has steadily strengthened the skills of Nepali civil society organisations to generate conflict analyses, while ensuring that they are accessible by cutting jargon and reflecting the participant’s voices. “There was a clear improvement of understanding and skills in conflict analysis and early warning,” noted Friso Hecker of NepalMonitor. 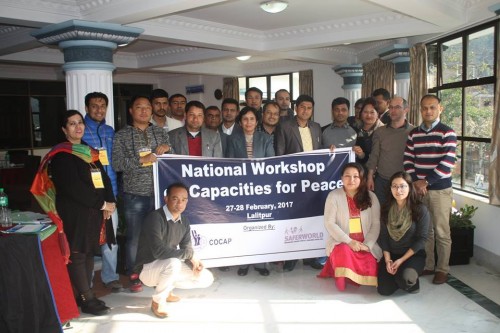 As the project gained momentum, partners reflected on what they had learnt and how this could be translated into into effective peacebuilding responses. To learn more, partners travelled to Ambon, Indonesia on a learning exchange, where theygained insight into how to engage conflict-affected communities, government authorities, civil society and security stakeholders on early response measures.

During the early months of 2017, three regional and national workshops were organised across Nepal for partners to share their new skills and lessons with otherorganisations. This served as a reminder that sustainability requires sharing of information, developing synergies and building long term relationships with communities. “In my department, we are now trying to expose our students to concept of EWER,” said Kamal Raj Lamsal of Mid-Western University from Surkhet district.  “We are helping them understand the different dynamics and contexts of conflict.”

Currently, NepalMonitor.org continues to publish its reports to keep local, regional and national civil society and government institutions up to date on conflict trends. Recently, Saferworld worked with NepalMonitor.org and the contributing partners to analyse conflict trends and produced a policy brief that provided a set of recommendations on how to prevent or mitigate emerging conflicts.

There has been significant progress in early warning analysis in Nepal. Those involved now seek to develop the capacity to respond in practical, effective and timely ways to reduce tensions, prevent violence and address underlying drivers of conflict where possible. “Even as the country is set to implement its new constitution under new federal governance model, the EWER process will continue to be relevant”, said Nand P Sah of Nepal Madhesh Foundation.

Capacities for Peace (C4P) was a joint project undertaken by Saferworld and Conciliation Resources from September 2013 to February 2016, funded by the EU under the Instrument for Stability. Saferworld led the implementation of the C4P project in Nepal with Informal Sector Service Centre (INSEC), Nepal Madhesh Foundation (NEMAF), Peace Action Group-ILam (PAG), Centre for South Asian Studies- Nepal, Mid-Western University’s Conflict and Peace Studies Department, Mahuri Home and Collective Campaign for Peace (COCAP) and their network of regional organisations.