A Saferworld community safety project in Nepal is highlighting the positive role that communities and NGOs can play in security-related issues.

Saferworld’s latest community safety project in Nepal is working at village level in four districts of the country to build relationships and trust between community members and local government authorities, including the police and security providers. One year into the project, authorities are starting to see the value of this type of community-led approach. 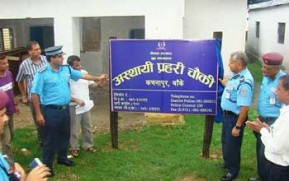 The project has brought the community and local authorities together by creating Community Security Working Groups (CSWG) which are an inclusive and participatory way of encouraging dialogue. Community members and local government authorities, including the police, come together to discuss local safety and security issues on a regular basis, identifying and prioritising security-related problems within their village and developing action plans to deal with those identified issues. The CSWGs have also been implementing various activities to improve local safety concerns based on these action plans.

In one of these areas, Kachanapur, Banke district, the working group – or Citizens’ Committee as it has called itself – identified the lack of police posts and the absence of security providers in their community as a key cause of growing crime and insecurity. So establishing a police post was one of the major goals of their action plan, with the committee garnering strong community backing for this (with the support of Saferworld and its partners). After many rounds of dialogue between community members and relevant government authorities – including the Village Development Committee (VDC) secretary, district administration office, district development committee, district police office and the regional police headquarters – a temporary police post was finally established in Kachanapur on 18 June 2013, under the command of a Nepal Police Assistant Sub-Inspector with 11 police officers including two female police officers.

At the opening ceremony of the police post, the Under Secretary of the Ministry of Women, Children and Social Welfare (MoWCSW) told local media that the Ministry understands the positive role non-state actors can have in terms of community security provision. ‘‘Initially we were sceptical about allowing non-governmental organisations to work in security-related issues,” he said. “But after witnessing their implementation process for the past one year, we feel that they are contributing positively in this field.”

The Deputy Inspector General of Nepal Police (DIGP) for Mid-Western region who opened the new police post also praised the positive involvement of the community security working group. “The police has limited budget to establish temporary police posts due to resource constraints,” he said, “which is why the community-level initiative and support shown by the Citizen’s Committee is positive and appreciated by the organisation.’

Saferworld’s current community safety work in Nepal is being implemented under a project funded by the Embassy of Denmark. This project, 'Enabling civil society to contribute to a more effective, inclusive and accountable public security policy and programming in Nepal', is being implemented in three Village Development Committees in each of four districts in Nepal (Banke, Bardiya, Sunsari and Sirahawith) with local partner Informal Sector Service Centre (INSEC).