Creating something new: Aswar Initiative for Peace and Development

“We need to work on ourselves by ourselves, this is better than just waiting for others to improve our country.”

Meet Aida Muhammad Ahmad Sultan, an activist and organiser in Taiz, Yemen, who after joining a peacebuilding project in her neighbourhood went on to create a new collective, Aswar Initiative for Peace and Development, inspired by the impact of her work. We spoke to her about the journey so far.

In 2017, our Yemeni partner the National Organisation for Community Development (NODS) launched the Communities Build Peace* project in Taiz, aimed at helping people across conflict divides to work together to build peace and stability in their local areas, supported by Saferworld. The project brought together 40 individuals who formed 2 small action groups to tackle issues faced in various neighbourhoods in Taiz.

“There was an announcement circulating on WhatsApp [about the project], so we decided to apply and try our luck. They then called us to tell us we were accepted, and after that the team was formed. The initial team was of around five members, myself, my colleague Hamza and three others. They told us they wanted more members, around 20, so we nominated people we know…  we tried to look for [people in the] community who have known contributions to the community and chose them. And we formed the team and began working on activities together”. 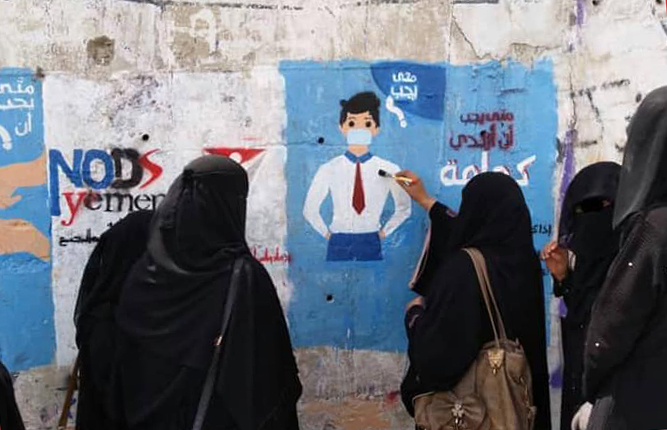 Aida explains, “Through NODS we gained a lot of information and several skills, and we also benefited a lot from the training courses provided during the project.”  These trainings included how to facilitate and manage meetings, analytical skills, preparing and writing reports, and project planning. “The first activity we did was repairing damaged roads, and then the second activity was reducing celebratory gunfire at weddings. The local authority, the head of district, the security bureau all cooperated with us. We held meetings with them, they were successful activities.

Working with NODS, I was always working on a bunch of stuff. I mean I wouldn’t just depend on the organisation to give me something to do, I used to try to come up with initiatives, for example I’d print brochures at my own expense. I was very active.”

Soon enough, Aida and her team felt inspired and confident to formalise their team. “Our vision was different to others [in the project]. We wanted to form an initiative that worked on more long-term issues – on awareness-raising and development. So my colleague Hamza suggested to me that we form this initiative and whether I was up for it, and I said let’s give it a shot. After that, we implemented our first activity successfully, and then the one after, and thank God from one success to the other we saw ourselves capable of doing this.”

In the space of a year, Aswar Initiative for Peace and Development have conducted numerous successful projects and activities that have bettered the llives of Taiz residents.

“We’ve carried out many activities, most of which is awareness-raising. The first activity was to raise awareness on students carrying firearms and weapons that is widespread in schools, speaking in classrooms and meeting with teachers and administration, to find solutions to the problem. We also worked on creating anthems in the classroom on peace, we printed dozens of posters and brochures and distributed them in public places. Another activity was on ‘Al-Magayyel’, which is the gathering of men who chew qat. We brought awareness about its impact on society, and we targeted the places where the largest number of influential figures gather.”

The initiative also targets those most in need, “We also visited cancer centre patients and distributed gifts, foodstuffs, and financial aid for patients in Al-Sha'b and Al-Adouf areas, and distributed financial aid to 30 poor families. We’ve continued repairing roads where its people were suffering from difficulty in movement and many victims fell due to their dangerous condition.”

Aswar Initiative has gone from six original member to 22 members. “Most of the members are from 18 to 22 years of age, a few in their thirties. I am a university graduate, most [members of the group] are computer engineering graduates, some are community activists, and others are just people with good intentions that like charity work and to support us.”

Adapting to COVID-19 and other challenges

“An obstacle that we face is that sometimes we don’t receive strong [financial] support. There are big projects in our heads that we want to implement, but there is no such support that enables us to implement these projects. So we just do with simple activities even though our ambition is greater. Now we are trying to form relationships with institutions. When we have relations with institutions, we can get this support and using that support, we can implement larger activities.”

The spread of COVID-19 in Yemen has been particularly distressing for communities already under the strain of a collapsed health-care system and the threat of other diseases. As a result, awareness-raising has never been so crucial, with high levels of scepticism of the virus and mistrust of advice.

Aswar Initiative has confronted this challenge head on. “We’ve been raising awareness about COVID-19 through four phases; the first phase was through a meeting with the district head, officials of the local council and the director of the district’s health office, to launch a campaign where we targeted five markets in Sabr Al-Mawadem district [in Taiz] by spraying sterilisers and making people aware of the importance of hygiene and sterilisation, wearing masks and gloves. The second phase where we targeted homes overlooking these markets, putting up posters to inform about COVID-19. The third phase was targeting mosques. The fourth stage was raising awareness through drawing graffiti about the virus in several areas of the Sabr Al-Mawadem district. The drawings included expressive pictures of the importance of washing hands with soap and water and the importance of wearing a mask.” 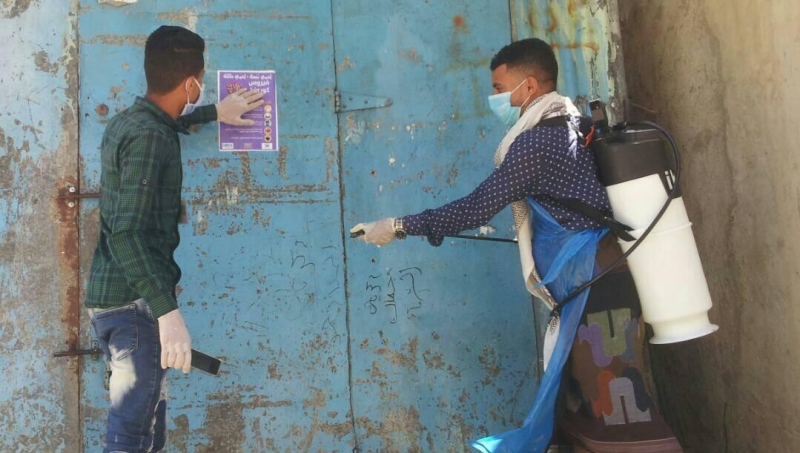 Aida and her team have continued to work with NODS for different projects, including their COVID-19 awareness work. Saferworld continues to support NODS in equal partnership to push ahead and enhance their work in Taiz responding to community needs and developing a wide network of peace advocates and local collaborators.

“Young people doing humanitarian is a good thing. They are more active, they have greater mobility and activity, desire and love of life which gives them ambition, a love for the future. It’s better than just sitting around all day or getting distracted and deviated towards other stuff.

Each [person] should form an initiative and do as much as they can, they have nothing to lose.”

* Communities Build Peace project from 2017 – 2019 was funded by The Netherlands Ministry of Foreign Trade and Development cooperation and UK Aid Direct to enhance peacebuilding mechanisms in Yemen. This year, extensions of the work has been co-funded by the Allen and Nesta Ferguson Foundation.