Footing the bill: pressures to host lavish celebrations in Kyrgyzstan are costing people a fortune

In Kyrgyzstan and other Central Asian countries, social pressures to host costly and exuberant celebrations and rituals can leave the hosts feeling the heavy costs. They may be forced into debt or have to work abroad for a better income to pay these debts off. In Samarkandek, in the south-west of the country, communities have come together to find ways to address the problem.

Pride, honour and the fear of social stigma are deep-rooted in Kyrgyzstan. Expectations on people to hold ‘toy-ash’ – celebrations in honour of an event, such as an anniversary, wedding or funeral – pressure many to live beyond their means. “It defies rationality. Despite a shortage of finances, people have to ‘compete’ with each other to organise the fanciest event,” said Shamshiddin Tagaev, from Samarkandek village in the region of Batken. “It happens because of social pressure,” he continued. Many older people in particular believe that holding lavish events will reflect well on them and their families, and make them honoured in society, especially as they have worked and invested for their children, and now believe the respect should be returned to them.

When people decide to hold these celebrations, they set out to find the money no matter the personal cost. People take out loans with high interest rates, sell their belongings, use the savings sent by their relatives (who are often labour migrants), or even send their relatives to work abroad to pay off what they’ve had to borrow. “I know people who have damaged their health working in difficult conditions as labour migrants, just to earn the money to cover a wedding,” said Shamshiddin. Abdulmalik Uulu Baimat, who lives in Batken, stressed the struggles that many young people face: “On the one hand we have to support our parents and relatives, and on the other hand we also need to invest in our own growing families.” 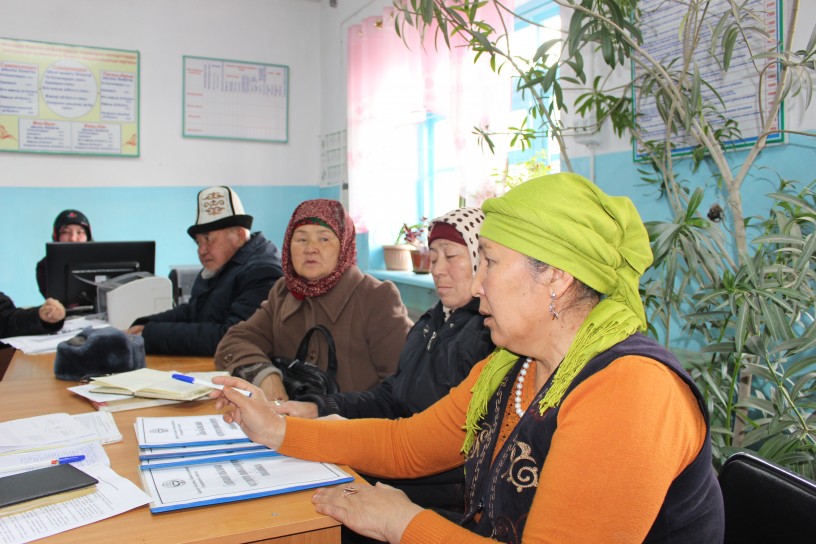 Members of the crime prevention centre discuss the impact of their work. © Bazarbai Maseitov/Foundation for Tolerance International.

In a country where the average monthly salary in 2018 was 16,218 Kyrgyzstani soms (230 USD), the amount of money spent on the average ‘toy-ash’ is 680,000 soms (9,900 USD)*. Spending on ‘toy-ash’ is reported to have increased by 250 per cent in the last ten years – from 40 billion soms in 2008 (570 million USD) to 140 billion soms in 2018 (2.1 billion USD). “The high rate of unemployment and the lack of economic opportunities doesn’t stop people from taking out loans and borrowing money” said Abdulmalik. A study by the United Nations Population Fund in 2016 backs this up. It found five per cent of loans taken out across the country are to organise toy-ash celebrations. This number varies across different regions – in Osh, Kyrgyzstan’s second city, the number is as high as 18 per cent.

Public figures, authorities and communities have tried coming up with ways to curb excessive spending. In one example, from 2018, villagers from Ak-Turpak in Batken promoted the idea of limiting high costs for celebrations by suggesting that the money goes to support a charity to help vulnerable people in their community. They developed a proposal that was presented to the Batken regional administration, which is now being considered.

In Samarkandek, efforts by the local government to regulate the costs of celebrations have had limited results. In 2018, this issue was raised at the local crime prevention centre – a forum supported by Saferworld and partner Foundation for Tolerance International, which provides a space for authorities, police and community members to work together to identify and address conflict and security concerns. Representatives of the centre, including Shamshiddin, released a study which revealed that expectations to spend vast amounts of money on ‘toy-ash’ not only hurts people’s finances, which has serious implications on their well-being and ability to provide for their families, but also creates tensions between younger and older generations because of different attitudes towards the events. “Crime prevention centres should have a platform where all generations can discuss and reach compromises on extra spending,” reflects Abdulmalik.

Following talks between the local government and the community, the centre began to raise awareness of the consequences of overspending through meetings, reaching nearly 300 people. Despite differing opinions, a majority in the community agreed that this is a problem. One tactic to ensure that these messages resonated with all members of the community was citing Islamic principles – which forbid wasting by extravagance. Influential imams spoke to their congregations to raise awareness during Friday prayers. Theatre performances were also organised to highlight how these issues cause financial stress on families and create tensions between residents. Karamat Taabaldieva, head of the centre’s women’s committee, said that the awareness raising has had a positive impact: “It has helped community members to think about whether extra spending [on holding ‘toy-ash’] is a decision taken by people themselves or whether this is due to social pressures.”

Samarkandek’s local council has issued a decree that set up voluntary teams, including members of the crime prevention centre, to hold regular meetings with communities to find ways of tackling the issue. In addition, the local government is providing 15,000 soms (215 USD) to support these efforts throughout 2019. “Another positive impact is that our crime prevention centre has become popular among neighbouring communities as an inclusive platform to discuss and prevent emerging conflict issues,” added Karamat. One measure of this success could be seen in the interest from community members in the neighboring Ak-Tatyr municipality to do something similar.

While members of the crime prevention centre acknowledge that the social norms underpinning these lavish and expensive events are ingrained, they have been encouraged by the positive effects their efforts have had. They believe they are important to remove unnecessary burdens on households that already face many socio-economic pressures, and to prevent conflict within families. “The close engagement of the crime prevention centre on issues of extra spending improved people’s understanding and our approaches have helped to stand against social pressures” concluded Shamshiddin.