From contested cattle camp to secondary school: signs of tolerance and understanding in South Sudan

The creation of more administrative areas in many parts of South Sudan has led to unprecedented numbers of land disputes. After clashing over the ownership of a strategic cattle camp in Jonglei State, five clans from Ajuong community came together to resolve their dispute and move towards more understanding.

“The main causes of conflict in our community are disputes over land ownership,” said Ayuel Werabek, chief of the Ajuong community.

Comprised of five clans, the Ajuong community in Jonglei State, in the east of South Sudan, have lived in harmony for years. But when the state government divided Ajuong into five separate payams*, boundaries were created and the issue of land ownership threw the clans into turmoil.

Located in the centre of the five payams is the Pajongkot cattle camp, which is situated on high ground. Five clans, each of which owns cattle, live around this cattle camp. Following the division of Ajuong into smaller payams, each clan fiercely claimed it for themselves.

Intra-communal conflict is rife in many parts of South Sudan, especially in cattle-keeping communities, with cattle raiding regularly leading to violence. When the rivalry between the clans in Ajuong became tense, it prompted the state authorities to intervene.

“People acted differently after the dialogue”

Bringing five clans together for discussions and reconciliation is hugely challenging. The authorities sought the support of Saferworld and partner Church and Development (C&D), who have experience forming and supporting community groups across South Sudan where people identify and address their safety and security concerns. Together with the Jonglei State Peace Commission, Saferworld and C&D facilitated two dialogues for the five clans – one in May 2018 and the other in June 2019. During the first dialogue, two clans sent representatives without much decision-making power and there were no politicians present. The clans failed to reach an agreement and tensions continued, with the potential of a spill over into violence likely.

After significant advocacy work by the community groups and C&D, the community groups in Jonglei State convened a second dialogue in June last year, and the community chiefs succeeded in persuading more influential clan leaders to attend. Saferworld and C&D also worked with elders in the community to reach out to national-level politicians, perceived as an impartial third party, who agreed to attend this dialogue.

The clans raised a number of concerns which have caused divisions in the community including insensitive statements from local-level politicians, unfair distribution of resources and land disputes. Two of the clans were disillusioned after the first day, as they claim sole historical ownership of the site and didn’t want to relinquish their claim. But after two further intense days of dialogue, they were convinced by the other clans to share the camp.

By the end of the dialogue, all five clans vowed to work with political leaders to settle their issues in peaceful ways. The talks concluded with the signing of resolutions outlining the causes of conflict, how to address them and a promise to implement them. 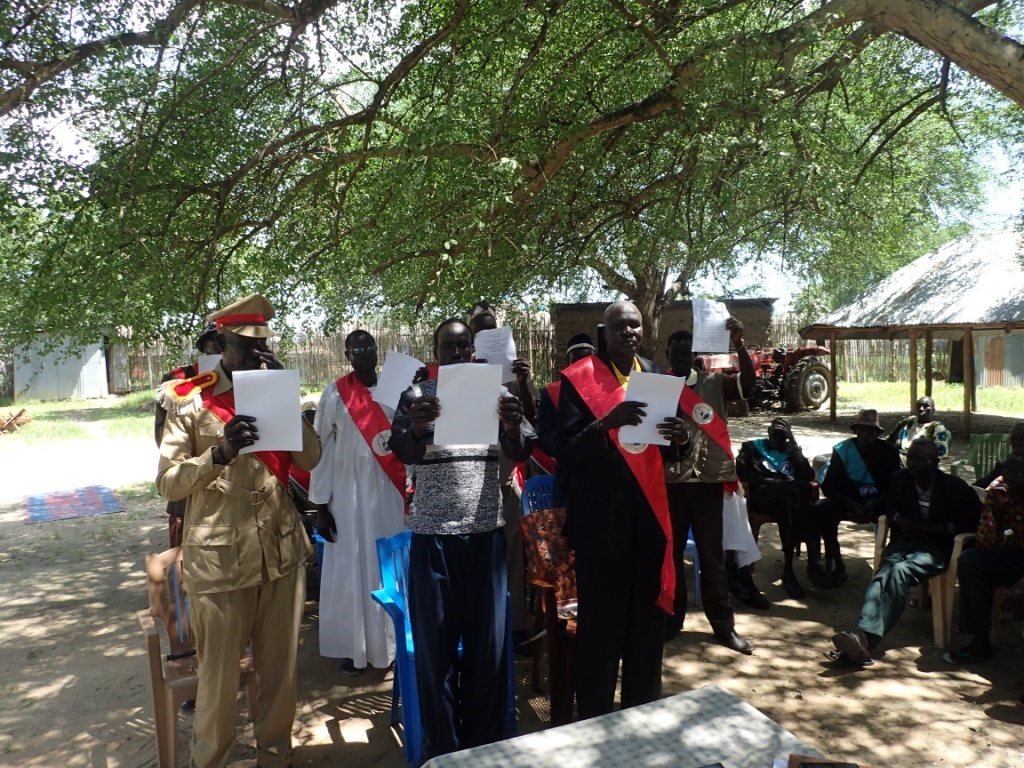 Once the resolutions were signed, the county authorities consulted the leaders of the conflicting clans, and proposed the idea that their disputed land could be used to establish a secondary school, which would benefit the entire community of Ajuong. After a series of further meetings, the community leaders agreed to hand over the disputed Pajongkot cattle camp to the county department of education.

“We are now raising funds to construct the school,” said Daniel Riak, the deputy chairperson of Ajuong community and an elder living in Bor Town. The last time the Ajuong community had serious skirmishes among themselves was decades ago, but Daniel highlighted that the dispute over Pajongkot cattle camp was about to plunge the community into serious conflict. Two months after the June 2019 dialogue, members of the Ajuong community have raised five million South Sudanese pounds (almost 40,000 USD), and the construction of the school has started.

“These dialogues demonstrate that getting people together to discuss their disputes takes time and hard work, and that building peace is a long-term process,” said Peter Machar, Saferworld’s Policy, Advocacy and Communications Coordinator in South Sudan. “Although Saferworld and C&D created a space for and supported the dialogues, communities are always at the heart of change and building peace.”

In a rare move, the five clans then came together at the historic Ngawai cattle camp which has been a cattle camp for centuries and is a prominent area for South Sudanese rituals. Their aim was to send a message to their community that they should not cling on to past differences, and need to move forward to live in peace. “People acted differently after the dialogue,” said James Majok, a community leader who was delegated by the participants to monitor the resolutions of the meeting. ”For the first time in years, all five clans from the community took their cattle to Ngawai cattle camp.” The clans can now look forward to the day their children can attend the school, built as a result of their community peacebuilding efforts.

Saferworld and partner Church and Development are working with communities in Twic East County, Jonglei State, to create space for authorities, communities and civil society organisations to identify, discuss and address community peace and security concerns. The project is supported by the UK Department of International Development through Saferworld’s UKAID Direct Project.

*Payam is the second lowest level of administrative unit in South Sudan. The hierarchy, in descending order, is national, state, county, payam, boma.