“Religion says that a woman must be respected”: Imams addressing gender-based violence in Osh city

Gender-based violence, including domestic and intimate partner violence, is rarely discussed in traditional and patriarchal communities in Kyrgyzstan. Baatyrzhan Giazov is an imam who has been working with his community in Osh to change this.

We talked to him to learn about his experiences as a member of the mobile group and to hear his thoughts on ways to respond to and prevent domestic violence and what role religious leaders can play. 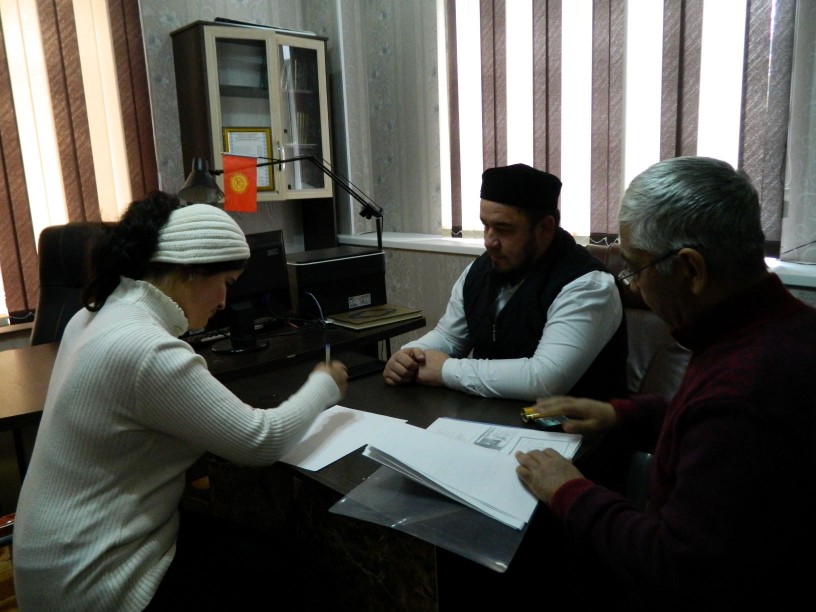 Why did you decide to work with the mobile group on gender-based violence?

As an imam and resident of this community, I was moved by the desire to help people. As well as  working in the mosque, I am a member of the mobile group. Members of this mobile group work closely with the Sulaiman-Too local crime prevention centre, which includes members of street committees, the court of elders and the women’s councils. It was set up to help people in solving their concerns. People come to me with different problems – from conflicts between neighbours over land, to divorces within families.

Visitors may come to my office in the mosque or approach me after prayer. However, in most cases, as part of a mobile group, I visit households with other members if there are conflicts within families. Some happen late at night. Both men and women, young or old, can be involved. In the case of a domestic conflict, people ask me for advice. I give advice based on various religious passages, which call for reconciliation, peace, and respect for each other, and which condemn violence.

There are more and more cases of domestic violence reported in communities. In your opinion, what is needed to prevent this?

Joint action of community members is needed to conduct prevention work. In the very beginning when a new family is created (when a couple are married), we talk together about different aspects of family relations, and the rights and responsibilities of each family member. There are cases when the couple gets married, and after a while the husband might go abroad to find a job and ends up leaving his wife behind while he looks for work. He doesn’t send money and doesn’t allow her to work. In cases like this, I explain that women can study or work, and that religion does not say that women should sit at home unwillingly. Religion says that a woman must be respected, and her family should respect her opinion.

From your perspective, how can religious leaders help prevent domestic violence?

Religion says that imams should help people. Religious leaders may also actively participate in community life, for example, by being a part of the local crime prevention group. The mosque where I work has over two thousand visitors in a month. After Friday prayer, we have five-minute talks with men to attract the attention of our visitors to the problems that women face in their families.

During these Friday discussions, we talk about a range of different issues – from the responsibility of men in childcare and home care, to women’s health and education, to issues of domestic violence and early marriages. With other imams nearby, we worked a lot on preventing early marriages by talking about the issue after Friday prayer. With the introduction of a law that prohibits early marriages, there’s been a big step forward. On the issue of domestic violence, we say that religion forbids and does not accept any form of violence against women – be it physical or verbal. We say that husbands and other family members should respect women’s choices if they want to work or study.

In the talks with these men, we raise the question of legal marital agreements that could be registered officially with state structures. This could be considered a tool of domestic violence prevention, because it provides legal protections for both wife and husband.

How have those who have heard you speak on this issue reacted to it?

The reaction has been positive. After talks where I raised the issue of domestic violence, visitors come to me to ask questions or seek advice. Some questions relate to domestic conflicts, family conflicts or divorces. ‘Kelin’ (daughters-in-law) come to me to ask for advice regarding family relations with their husbands or their husband’s mothers or family members, as families live together. Men mostly ask questions related to divorces or domestic conflicts between wives and mothers-in-law. Sometimes parents come to ask questions about early marriages, and they request to hold a ‘nikah’ (a Muslim marriage where the rites are performed by an imam) with underage girls. I refuse. I explain that underage marriage is illegal, and the punishment may fall on the organisers and initiators. By raising awareness, we convince them to wait until the girl reaches adulthood before marrying.

Now the registration of nikah is being done in a special book where we write down the passport information of the couple and their signature, and we make sure that the couple is of legal age.

What are some of the challenges and successes you’ve had?

Human relationships are very complex. In a particular conflict situation, I can’t take one position. It’s necessary to try to understand the situation from both sides. It is hard to monitor or assess changes in visitors’ behaviours after these talks – for example, it is hard to know if some stopped abusing their wives and began to respect them. Nevertheless, I believe that these talks have a positive effect on resolving cases of domestic violence. To me, success is positive changes in the community where I live. Success is when I help people and see that my help was useful.

What are your plans for the future?

I will continue to work as both an imam and a member of the mobile group. In the future, I would like to contribute to building peace in my community by raising awareness of issues that women and children face every day.

This activity is part of a programme supported by the United States Bureau of International Narcotics and Law Enforcement Affairs (INL), with the aim of supporting inclusive groups from communities in Kyrgyzstan to identify security concerns and to jointly work with each other and with law enforcement officials to find solutions.