“Freedom from fear, conflict and violence is the most fundamental human right and the foundation for building peace and prosperous societies.”

Report from the High Level Panel to the Secretary General

Saferworld's research and advocacy with civil society, states, and international institutions played a key role shaping the civil society debate around inclusion of peace and security in the post-2015 development framework. A key milestone came when the High Level Panel on the Post-2015 Development Framework, co-chaired by UK Prime Minister David Cameron, affirmed that peace and accountable governance must be cornerstones of a new transformative global development agenda.

Over recent years, there has been a growing understanding that in some states, problems as diverse as poverty, gender inequality, lack of access to education, child and maternal mortality, as well as lack of access to water and basic sanitation, are inextricably bound to conflict and insecurity. As the World Bank's 2011 World Development Report puts it, "The MDGs don't speak to some of the fundamental problems faced by fragile states, particularly insecurity and political instability, so it's no coincidence that the fragile states have performed so badly in terms of attaining the MDGs".

Shaping a new development agenda has been a key strand of our work, and the need to effectively examine the causes of conflict and propose models for change has been at the heart of our policy work. Saferworld produced a series of briefing papers during late 2012 to ensure that the global conversation on how to ensure conflict prevention and peacebuilding feature in the post-2015 framework was grounded in strong evidence.

An important aspect of our work has been collaboration with actors engaging at different levels of the post-2015 process, making sure that experiences on the ground have fed into the discussion on what to include in the framework. To guarantee that our arguments were heard and to increase the likelihood that our recommendations would be included in the High Level Panel's (HLP) report, we worked through networks such as the Civil Society Platform on Peacebuilding and Statebuilding, the Beyond 2015 Coalition, the European Peacebuilding Liaison Office, as well as with partners such as the Quaker UN Office, the Alliance for Peacebuilding, the IgarapéInstitute, and the OECD's International Network on Conflict and Fragility. Together, we met with senior officials and ministers to persuade them of the importance of peacebuilding as a core dimension of all development efforts.

Our targeted work included coordinating a joint statement signed by 56 civil society organisations around the world to put peace on the post-2015 agenda at the opening of the 67th UN General Assembly in September 2012. With support from Saferworld and our partners, a team of advocates from conflict-affected countries addressed HLP members, heads of state, and key ministers, directly delivering the message that the poorest countries can only make progress if there is security, access to justice and improved governance.

As part of our wide engagement on the issue, Saferworld presented recommendations to diverse audiences including OECD development ministers and heads of department, participants in the UN's Global Thematic Consultation on Conflict, Violence, and Disasters, meetings of UK officials, and members of the British Overseas Development Network (BOND). Following our presentations at UN thematic consultation meetings in Monrovia and Panama, we were also invited to help develop and refine the final recommendations from these consultations.

A key driver of our work has been to assert the message that the global community must address the causes of conflict and violence if there is to be meaningful improvement in the lives of the world's poorest people. The HLP's inclusion of these issues led a senior advisor to the UK Government to assert: "Saferworld's materials were some of the best and most influential both for supporters of the peace agenda and for sceptics."

The HLP's report presents a transformative development agenda which recognises that conflict and violence are significant factors holding back human development. If taken up by Member States, there could be a significant improvement to the lives of the most vulnerable living in conflict-affected and fragile states around the world. 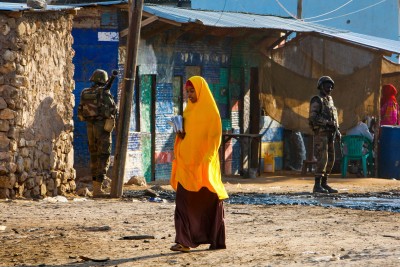 Beyond2015 - Beyond 2015 is a global civil society campaign, pushing for a strong and legitimate successor framework to the Millennium Development Goals.

A Peace Agenda for Global Development by Graca Machel