On the margins: supporting human and land rights for minorities in northern Uganda

People from marginalised groups of society, including women, elderly people, people with disabilities and people living with HIV/AIDS, are regularly facing human rights injustices that impact all aspects of their lives, from the services available to them to the land they live on. Saferworld works with Rural Initiative for Community Empowerment West Nile (RICE WN) in northern Uganda to resolve and prevent these injustices through awareness raising, victim support and advocating for policy change. Here we look at the stories of two individuals who have been supported to seek justice.

In 1999, Maria* from Pawatomero village in Nwoya district was diagnosed with HIV/AIDS during a pregnancy check-up. She lived in fear of stigmatisation and discrimination which kept her from disclosing her status even to her closest family members:

“When I found out I was HIV positive, I only confided in my sister who advised me not to share the news with anyone else including my mother. I feared to tell my husband because I thought he would shoot me. He was a soldier who had returned from active conflict… [As HIV positive] we are referred to as the living dead.”

At the following antenatal check-up, Maria brought her husband who then learned about her positive status and underwent his own testing. “My husband was very understanding,” Maria said relieved. After giving birth to a healthy baby girl, she received counselling through a local HIV/AIDS support group on coping with HIV/AIDS, as well as training on strategies for positive living.

Through this group, Maria gained confidence by speaking about her status and receiving counselling. In 2017, Maria joined a community action group, supported by Saferworld and RICE WN, alongside 20 other people from marginalised backgrounds. The group received training on conflict resolution, human rights, land rights and gender norms. They also received training on how to advocate for their rights.

The project then hosted a district-level dialogue for political and cultural leaders in the area to give marginalised people, including Maria, an opportunity to voice issues affecting them. In this discussion she outlined the challenges faced by people living with HIV/AIDS – including poor access to counselling and a lack of testing facilities and medicines within the local area. This meant that those with HIV/AIDS were having to regularly travel long distances to pick up anti-retroviral treatments, often giving up or sharing medicine to avoid having to travel. Maria advocated for the introduction of door-to-door mobile clinics and other equipment to address these needs.

Following the presentation, with the project’s support she developed a strategy to address some of the accessibility challenges she had identified for people living with HIV/AIDS. In response to the challenges Maria outlined, the Nwoya district local government provided bicycles and equipment to support her proposals and Maria was able to begin mobile clinic work, providing advice, medicines and testing for people in the area. 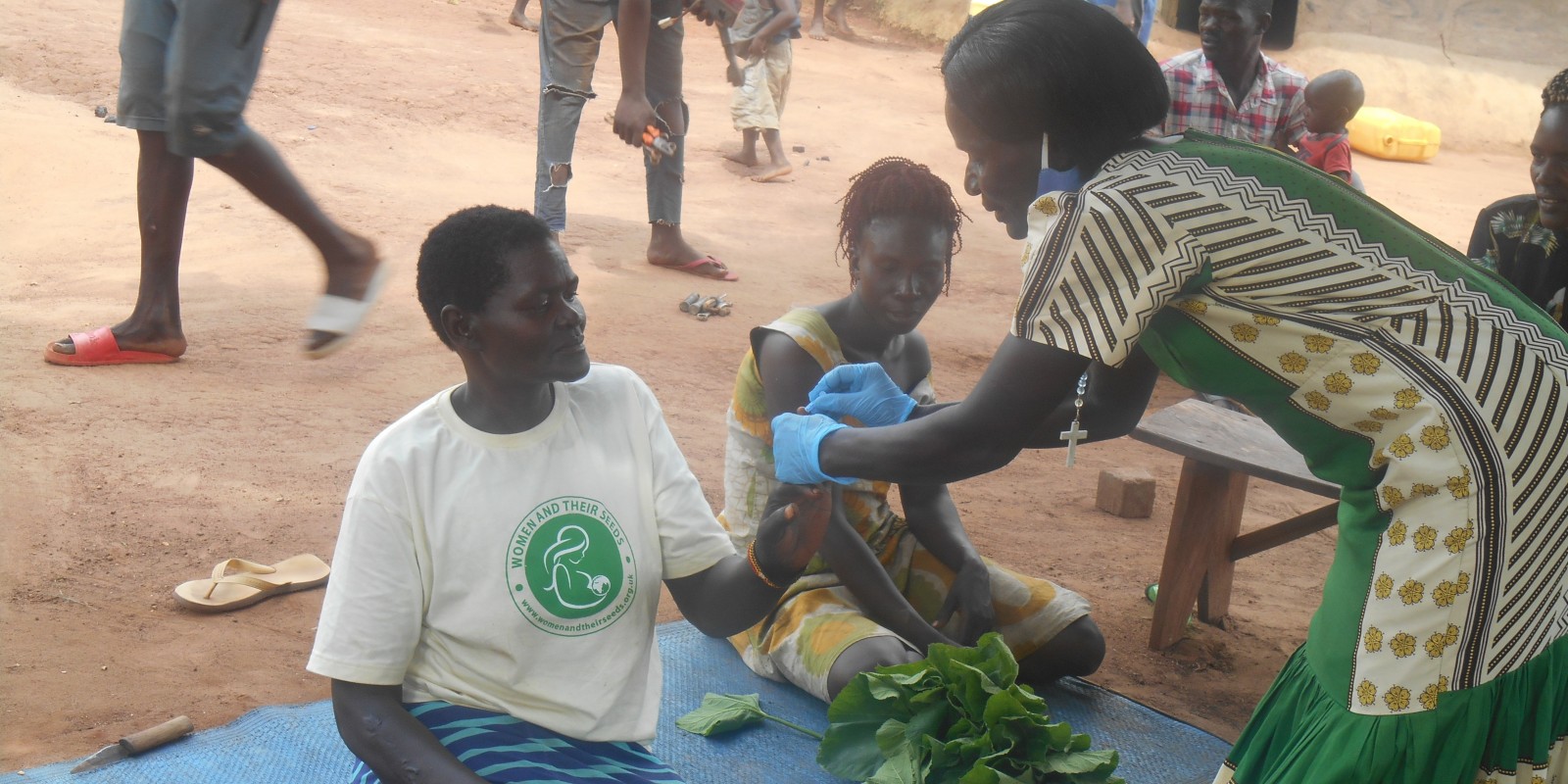 Maria in action with her HIV/AID mobile clinic.

Maria then went on to join another action group specifically for people living with HIV/AIDS, to mentor them and help them learn about human rights and fair access to land and resources. Today Maria stands as a community leader, activist and inspirational role model working to decrease the stigma, stress and fear associated with HIV/AIDS, and successfully advocating for the rights of marginalised people.

Across Uganda land is a precious resource. Millions of people depend upon it for their survival and as such, disputes over land are a primary source of violence. Land conflict can be born out of family disagreements, often engulfing multiple families or even entire communities, and these disputes can remain unresolved for generations.

In Got Apwoyo sub-county in Nwoya district, John* was told to vacate land inherited from his mother following a dispute within his family. Despite intervention from local leaders and elders, John’s maternal uncle insisted that John could not stay on the land.

Saferworld and RICE WN supported a process to resolve the dispute over the course of a year, firstly by identifying a common set of outcomes for the whole family, including what they wanted to achieve and how to get there. The family agreed on the support needed for their vision. They named the local council chair of Nwoya as a vital person to take the case forward. RICE WN then held a meeting with the chair, who set up a five-person committee representing relevant authorities to help resolve the case.

The committee members and John’s family were given basic training on conflict resolution, gender sensitivity and land rights. During their first joint meeting a series of recommendations were set out, including opening a case with the police to report threats of violence in the family. These recommendations were then expanded and followed up, enabling John to gain access to his land, restore relationships within the family, and eventually for the land to be signed back to him.

When we revisited John a year later on the 100-acre plot given back to him by his uncle, he had built a home and a shop and had harvested maize, rice, cassava and groundnuts to provide for his family. "For ten years, I have been to all institutions and individuals to have this land conflict ended and enforced, but all these have been in vain – it is only now that Saferworld came in to support me that I am back on my land," explained John.

John has significantly grown in confidence and skills and has since been elected as a local council chair for his village. He currently works to resolve cases similar to his own that are brought by other villagers. The family is now seen as a model family who many look up to for learning.

“We’ve seen some really positive examples coming as a result of this project,” Saferworld’s Project Coordinator Dorcas Akello explains. “It is not enough to temporarily fix someone's issue. Once individuals and institutions can work together for a common interest in addressing the exclusion for a certain category of people, then there will be peace. We have to work with families, communities and networks and give them the tools to empower themselves to make the changes they want to see.”

*Names changed to protect their identities.