Saferworld’s community security work aims to bring communities, police and local authorities together to find practical solutions to local security issues. In this blog Simon Moore shows how discussion of a recent police shooting can lead to greater understanding and increased trust between the police and communities.

Every month members of the local community and police come together in Kuajok, South Sudan, to talk through incidents, concerns and issues from the previous month. This month around 25 people are attending the Police Community Relations Committee meeting, including Lt. Col. Simon Deng Kur of the South Sudan National Police Service (SSNPS), who is acting chair of the committee, and two other police officers.

The big issue in this meeting is a shooting that occurred the previous Thursday. Initially it appears that a policeman has shot a civilian in the centre of town with a number of bystanders. Community members want some answers to what seems like police over-reaction. 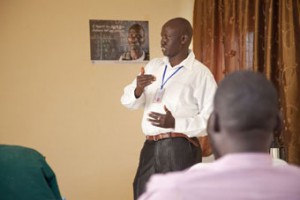 After some discussion the picture changes. It emerges that the policeman was shooting in self-defence after being attacked by a group of civilians. He seems to have shown a considerable amount of restraint shooting a warning shot in the leg rather than a more lethal shot. This provokes a constructive  discussion in the meeting about the issue of reasonable force and proportionality in the police response.

As more discussion takes place and new facts are revealed, a new dimension becomes apparent. The initial disagreement was between two civilians. One man had hired another to make some bricks for him, but he was not satisfied with the results and refused to pay for the bricks. An argument ensued, but it is not clear whether the police became embroiled in a breach of the peace, or acted out of their jurisdiction by becoming involved in a civil matter. At this point there is discussion about the difference between civil and criminal matters, with an explanation from a lawyer who is in the meeting.

Alongside discussion of these important local matters, the meeting is also a practical way to build the capacity of the group to organise themselves. Acting chair Simon has been receiving training on how to chair the committee, and this month there is a proposal (which is passed) that he now becomes the permanent chair of the committee. A new secretary is also appointed from the community to replace Allie Bosch, a representative from the Safety and Access to Justice Programme (SAJP) supported by the UK Department for International Development. He has been filling the role temporarily after the previous secretary left the committee.

A female participant also brings up the low level of female participation in the group and asks what can be done to change this. Teresa Anyang Akec, of the Panda Women’s Development Group, a respected, long-standing member of the community, suggests that while the day of the week probably won’t affect women’s attendance, keeping the meetings short will make it more likely that women who are also taking care of household matters and looking after children will come. There is agreement that meetings should last no more than two hours.

Closing the meeting Simon leads by example saying he will do his best to bring along two or three female police officers to the next meeting. He encourages other participants to bring possible female members with them as well.

After the meeting the police and community members share lunch together – itself a sign of progress and the increased trust that is developing.

Kuajok’s Police Community Relations Committee meetings are part of a wider police reform process which is underway in South Sudan. The SSNPS has chosen to adopt a community-based policing approach which aims to build trust and cooperation between the police and the communities it serves. The goal is to create a modern, accountable police service which respects human rights and listens to the need of communities. The meetings are one way in which the police and public can interact positively – listening to each other and understand one another and jointly-problem solving to address the root-causes of crime and insecurity. The meetings also give the public a voice in how their police service behaves and operates. 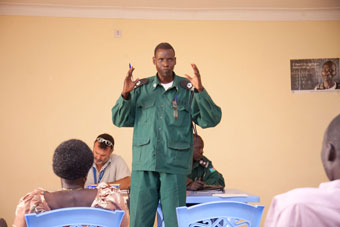 Jonathan Lea-Howarth Area Programme Manager, South Sudan at Saferworld explains their success so far. “These meetings have occurred monthly for the last nine months and the evolution observed has been remarkable. Community members have gone from passively attending meetings to feeling empowered to hold the police to account in a constructive and respectful manner – as the questioning about the shooting of a civilian in the most recent meeting shows.”

“It is also very positive that the police have a forum in which they can explain and defend their actions to the community. They are often feared and distrusted by a public that frequently does not understand the role and mandate of the police.”

By providing a safe space for civilians and police to build relationships, increase understanding, and strengthen lines of clear communication, Saferworld and SAJP are helping the people of Kuajok town to take the first steps on the road to building themselves a safer community.