Just 15 kilometres outside the capital of Tajikistan, Dushanbe, women and youth in Rudaki district face many challenges and threats to their security – including violence at home.

As in many parts of Tajikistan, violence at home is one of the most common problems in Rudaki district. There are few options for survivors to address the issue since not only is it taboo to discuss what is often considered ‘a family matter’ by authorities and society, but there are also low levels of trust in the authorities and few resources available for those seeking assistance. In most cases, survivors have no choice but to endure.

In some districts in Tajikistan the government, with support from international organisations, has set up support offices and shelters inside public healthcare facilities, where survivors of gender-based violence can stay for several days and receive psychological and medical aid. Some districts have also set up ‘gender-sensitive police units’, where police officers who are trained in responding to domestic violence cases can provide assistance. However, these services have yet to reach Rudaki.

As part of Saferworld and our partner Jahon’s support to community police partnership teams – which bring together community members and the authorities to identify and address safety problems – last year we provided small grants for the teams to use within their communities. The team in Rudaki suggested opening a psychological and legal counselling centre, where survivors of domestic violence could seek support. This centre will help in addressing domestic violence issues in the community and preventing further insecurity, conflict, and violence – particularly against women and girls – from happening.

The centre opened in November 2019 and was operational until February this year. During that period, 54 people (51 women, three men) visited the counselling centre with their concerns – such as violence at home and in the workplace, divorce disputes (including disputes over child custody) and land issues – receiving support and counselling from a psychologist and a lawyer. In this piece, we hear from two of them about why they needed the centre and how the centre helped them to solve their problems. 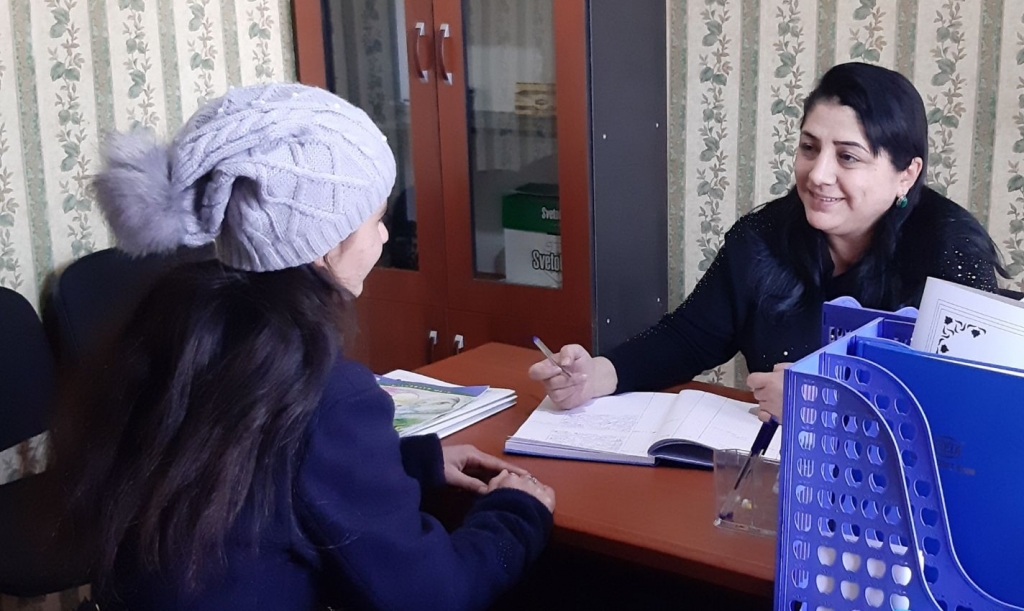 Shabnam’s story: a young woman overcomes violence in the family

Shabnam*, 27, came to the counselling centre to seek advice and justice to support her baby.

When she was 18 years old, her parents arranged for her to marry a man she had never met. Since arranged marriages are a common practice where she lives, Shabnam accepted her parents’ choice without protest. She hoped that she could make the best of it and that her future husband would treat her with respect. But soon after the wedding, she realised this would not be the case. From her first days as part of her new family, she felt a huge burden from her husband and in-laws.

As the youngest daughter-in-law, she had to get up early in the morning, clean the yard, milk the cows and prepare breakfast before the rest of the family awoke. Though Shabnam did her best to meet the overwhelming expectations placed on her, someone always criticised or berated her. Her husband, instead of taking her side, beat her. Shabnam decided that if she did not leave soon, she would be left with serious physical and psychological problems. The fact that they lived together for five years but were unable to conceive a child exacerbated the situation and her relations with her husband and in-laws. This was the main reason why they divorced, compounded by pressure from her in-laws.

Shabnam decided that if she did not leave soon, she would be left with serious physical and psychological problems.

On one of her visits to see her parents, she refused to return to her husband’s family. Her parents, seeing the physical signs of violence, allowed her to stay. Shabnam began to feel she was getting her life back. Soon she met a young man and after a few months of dating they decided to marry through a religious ceremony only, without an official state registration.

From the very beginning, her new husband’s family were against their marriage because she was previously married while he was not. To persuade his parents, he claimed that Shabnam owned property and was from a well-to-do family, highlighting that they would live separately after the marriage. When his relatives found out that this was not true, this heightened their disapproval and they turned against Shabnam even more. Over time, her husband also became controlling, limiting her communication with her parents, neighbours and friends. He did not allow her to leave the house and sometimes hit her. When Shabnam got pregnant she believed that once the baby was born, things would improve, but they only got worse. Her husband’s relatives spread rumours that the baby was not his. After the baby was born, her husband relinquished responsibility and disowned both of them. Shabnam and her baby were forced to return to her parents.

Because her second marriage was not officially recognised by state law, she was also economically vulnerable as her husband deprived her of any financial support...

Seeing that the second marriage also failed, her parents decided to help Shabnam enter Art College in Rudaki. They looked after her baby while she studied. Her former husband soon remarried and lost interest in his child. Because her second marriage was not officially recognised by state law, she was also economically vulnerable as her husband deprived her of any financial support, including child alimony. When Shabnam asked him about financial support for their baby, he threatened her. She told a friend at the college about her predicament, who told her about the psychological and legal counselling centre. Shabnam decided to visit and seek advice from Firuza Saidamirova, the lawyer at the counselling centre.

The lawyer explained to Shabnam that she could prove the paternity of the child and claim alimony. After getting all the necessary legal information about her case, Shabnam tried one more time to discuss the issue with her ex-husband and explain the legal consequences of refusal. He did not take her seriously. The lawyer then contacted him to personally inform him that if he continued to deny his connection to the child, they would go to the court. Realising the lawsuit would bring him nothing but more problems, he agreed to provide financial support.

Currently Shabnam is in her second year at college. She still continues to receive legal support from Firuza even after the centre was closed. After her traumatic experiences, Shabnam says she is not planning to marry again and wants to continue her studies, get a job and raise her child.

*Name has been changed to protect her identity.

Farhod’s story: a young man repairs his broken past

As a child, Farhod*, 20, was always popular, a quick learner with an active and creative mind. He represented his school in events at both district and national levels.

After secondary school, he began studying at the technology and design faculty of the Tajik Technical University. He was in the middle of his first year when his life dramatically changed. Some older students took advantage of him and persuaded him to commit fraud with them. When they were caught, his friends got away by pinning everything on him. Farhod was arrested and spent several months in a pre-trial detention centre. His parents spent all their savings to hire a lawyer and prove his innocence. Thanks to their combined efforts, Farhod was released. But his problems were not over – due to his long absence he was expelled from the university. “Everything I had planned for future crashed down within few months,” he said. “I did not know what to do, where to seek support. I felt lost.”

His family stopped trusting him and began to act coldly towards him. They repeatedly blamed him for having lost their savings, and forbade him from using the phone or communicating with anyone outside the family. Whenever they left the house, they locked him inside.

All of these difficulties led Farhod to break down and he decided to take his own life. Fortunately, his family were able to intervene and took him to the hospital.

A few weeks later, his mother brought him a local newspaper with information about the newly opened centre. Farhod persuaded his parents to let him go.

“I never sought psychological aid before, as we never had such a service in our district,” he said. “I knew about psychologists only from TV. While I was locked up at home, I dreamt of speaking to someone who could help me find my way. It was a good day when I learnt about the centre.”

Farhod visited the centre every day for two months, and was in constant contact with Gulpari Latipova, the centre’s psychologist. Whenever he felt desperate, he called her to hear words of encouragement and support.

“I don’t not know how my life would be if that service was not available. Probably I would have tried to commit suicide again."

Farhod was not expecting huge changes in his life, he just wanted to get things off his chest and to be heard and advised. He wanted to talk to someone who would believe that what had happened to him was not solely his fault. As well as the psychological support he received, people from the counselling centre also helped him re-enrol in university. His relationship with his parents has also improved little by little, although things still are not perfect.

“I don’t not know how my life would be if that service was not available,” he said. “Probably I would have tried to commit suicide again. I often felt restless and suffocated at home. When I felt this way, I would immediately contact the psychologist and talk to her until I started to feel better.”

Farhod is continuing his studies at university. While he faced many challenges during his time away, he feels that he learnt some valuable lessons. He is sure that the psychologist from the centre helped him get back his life. “I want to open a new chapter in my life and win back the opportunities I lost.”

*Name has been changed to protect his identity.

In 2019, Saferworld began a project funded by the United Nations Development Programme called “Strengthening community security and prevention of violence against women in Tajikistan.”

The project contributed to the reduction of violence against women, girls and vulnerable youth by strengthening identification of, and responses to, cases of gender-based violence and other forms of violence in the home. It also supported community police partnership teams and communities to identify, challenge and address harmful gender norms, behaviours and relationships that perpetuate gender inequality and violence. The project focused particularly on strengthening the role of women and men to transform harmful gender norms and expectations and support young people to contribute to their communities’ peace, security and development.