Towards a people-centred approach to security provision: expanding community policing and security in Uzbekistan

Uzbekistan’s long and fraught history of corruption and abuse of power since independence has led to widespread public mistrust of the police. Saferworld has worked with civil society partner Istiqlol Avlodi to pilot a community policing and community security approach as part of the country’s ongoing efforts to reform the police.

After the collapse of the Soviet Union in 1991, former Soviet republics have struggled with repressive and corrupt police practices, with many cases of human rights violations, arbitrary arrests and underqualified policing staff. While crime has continued unabated, abuses by the police that are not investigated or punished have added to an atmosphere of insecurity, mistrust and impunity – and as a result, many crimes have gone unreported. There has been systematic abuse of power by law enforcement agencies, including the police, since Uzbekistan declared independence. Amid a wave of political, social and economic reforms – following the 2016 appointment of long-serving Prime Minister Shavkat Mirziyoyev as president – a police reform law came into effect in March 2017 that placed a greater emphasis on responsive security provision, rights and responsibilities of the police, transparency and accountability, and cooperation between law enforcement agencies and the public. Since then, the government has strived to improve the professional image of the police, enhance public confidence, and address corruption and other systemic problems.

“The level of confidence of people in police is low”, explained Nazifa Kamalova, chairwoman of Saferworld’s civil society partner Istiqlol Avlodi. “There is public dissatisfaction with its quality of work, poor results in fighting crimes and slow investigations. Our government is now making efforts to reform the sector and improve its work.”

Since 2010, with financial support from the US Government, Saferworld has been working with the police and diverse communities in neighbouring Kyrgyzstan and Tajikistan to improve security services and increase collaboration on the issues that affect people’s lives. More recently, in partnership with the United States Institute of Peace (USIP), we began to look into ways of further expanding the community policing and community security approach in the region to address people’s security concerns more effectively –working with communities to ensure that people take the lead in developing their own security solutions together with relevant authorities.

“It is extremely important to bridge the gaps of trust and confidence between people and governments, in particular between people and security providers”, said Barmak Pazhwak, Senior Programme Officer at the USIP’s Asia Center. “Programmes like those which Saferworld is doing in Tajikistan on community policing are really helping to bridge that gap, to build up the confidence and trust of communities in the police and also make police more accountable – not only to their officers, generals and government, but also to the communities that they are supposed to serve. When we were looking to initiate a community policing project and expand community policing approaches in Central Asia, we did not want to reinvent the wheel. We saw that there was already a programme on community policing in Tajikistan. We approached Saferworld and decided to apply their expertise.”

Following a USIP-funded regional community policing conference in June 2018 in which Kazakhstan, Kyrgyzstan, Tajikistan, Turkmenistan and Uzbekistan participated, the Uzbek delegation expressed a strong interest in piloting this approach in the country. We identified a partner – Istiqlol Avlodi, which works on a range of issues including human rights protection – to work with us on the project. In discussion with USIP, we agreed to implement a pilot project in Uzbekistan based on the approaches used and lessons learnt in Tajikistan and Kyrgyzstan. Saferworld held a series of trainings on community policing and community security with Istiqlol Avlodi who then undertook community security assessments to explore what communities felt were their major safety and security concerns.

“We started implementing the community policing project in November 2018 in two districts of the Jizzakh region of central Uzbekistan: Pakhtakor and Zarbdor,” said Nazifa. “We established and equipped two resource centres to provide safe spaces for cross-sectoral working groups composed of government officials, including from law enforcement agencies and community members, to meet regularly, conduct community security assessments, identify priority problems related to community security, and address community issues in collaboration with the police. In total, through our project we trained over 300 people. The Uzbekistan government showed great interest, with many members of the senate and parliament also taking part in our trainings.” 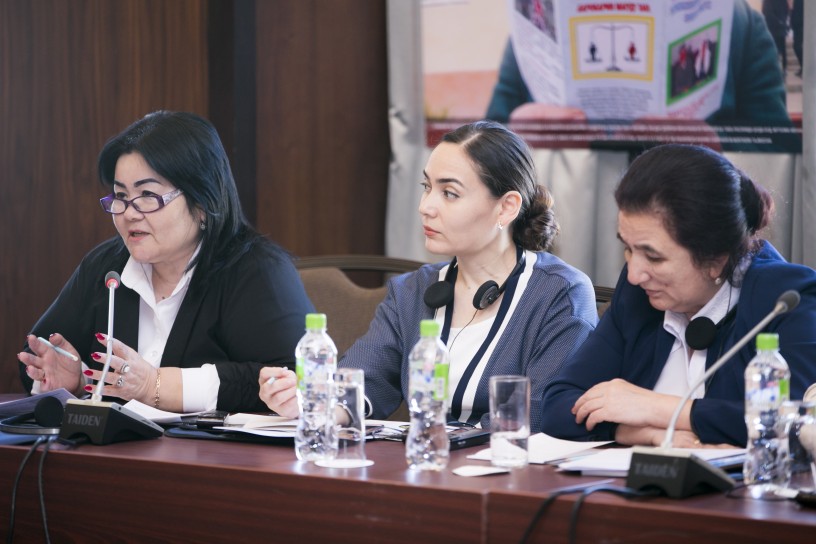 The project contributed to strengthening the ability of civil society organisations to conduct dialogues with local authorities on topics such as community security and community policing, and supported the local government in addressing people’s safety and security concerns, jointly with communities and civil society. Advocacy and outreach campaigns helped raise awareness, while local and national authorities started adopting the community policing approach more in their work.

One of the main issues identified by the working groups was the discrimination and stigmatisation faced by individuals (and their family members) who had been involved in some way with violent groups, especially those fighting in Iraq and Syria. The working group in Jizzakh developed an action plan to provide support to those who had been associated with violent groups in order to help them reintegrate into their communities. They formed a smaller group to work closely with these individuals and their families to identify and address their needs and concerns. They looked at each person’s skills and how he or she could support their families, and lobbied banks to provide them with small business loans with low interest rates. The group also stayed in regular contact with the families and provided advice on how to maintain their businesses and avoid conflicts within families.

Eshtemir Ismatov, the deputy chairperson of the Jizzakh regional government, attended the community policing and community security trainings. He stopped using stigmatising language in reference to people who had joined violent groups, and instead focused on addressing the underlying drivers of insecurity and violence. He has since urged local authorities to analyse and address these drivers in a sensitive way and to look at each case of violence individually – a major change in approach.

Another important result occurred when the chairperson of the Jizzakh government approached our partner, Istiqlol Avlodi, to ask for their help with a young man who had been detained by the police for distributing literature encouraging young people to join a violent group. Istiqlol Avlodi agreed to work with the authorities to support him in getting involved in the working group. Nazifa, Istiqol Avlodi’s chairwoman, reported that this collaborative approach has been effective in addressing security concerns and helping vulnerable young people become active members of their communities.

Khirad Kargasov, Saferworld’s Country Manager in Tajikistan, expanded on some of the benefits of the project. “It allowed us to link civil society organisations between Uzbekistan, Tajikistan and Kyrgyzstan to learn from each other how problem-solving through community and police partnerships can support responsive security provision. The project showed impressive results partially because we had a great partner – Istiqlol Avlodi – with a lot of local knowledge and the support of the local government in Jizzakh.”

“Saferworld’s Tajikistan programme piloted the first community policing project in Uzbekistan”, explained Khisrav Kholov, who coordinated the project for Saferworld. “Although our project was relatively limited in scope, we were successful in introducing the community policing [and community security] approach and in being accepted [in Uzbekistan].”

“Although our project was relatively limited in scope, we were successful in introducing the community policing [and community security] approach and in being accepted [in Uzbekistan].”

Nazifa discussed the impact of the project. “Cross-sectoral working groups in Pakhtakor and Zarbdor districts continue raising awareness with the population, in particular with women and youth to prevent support or recruitment into violent groups and how to address the underlying causes of insecurity. We’re also continuing our work with individuals who joined violent groups and were granted clemency by the president. Imam-khatibs [religious leaders] from the two districts talk about how violence is forbidden in Islam during their sermons at Friday prayers. We also hold football matches between [police] inspectors from the district department of the Ministry of Internal Affairs and young people whose family members had joined violent groups – as well as with other police officers and youth [to build trust]. We also cooperate with the women affairs committee in conducting workshops, especially focusing on awareness raising around the risks of support for violent groups and providing support for returnees. We want to transform working groups into public oversight groups at the Council of Members of Parliament.”

“We would like to keep the discussion open with both Saferworld and Istiqlol Avlodi to see if we could continue either in the same way, or to work with them to promote the role of women in community policing spaces because most civil society organisations in Uzbekistan represent smaller organisations led by women”, said Barmak of USIP. “Because – women-led organisations have already established themselves, they already have partnerships with the local government and there is a clear place for them to continue that role.”

Saferworld and Istiqlol Avlodi are exploring opportunities for continued partnership and expanding community policing and security programming in Uzbekistan.