The coronavirus pandemic has disrupted life for people around the world, and Kyrgyzstan is no exception. Because of the state of emergency and restrictions imposed by the Kyrgyz government, members of the Local Crime Prevention Centres in Osh province could no longer meet in person but they have used online communication tools to help their communities.

In Kyrgyzstan, COVID-19 and the ensuing government-imposed restrictions have exposed shortfalls in healthcare, social protection and economic security. Especially harrowing has been the increase in the number of reports of domestic violence in the country which, according to the Ministry of Internal Affairs, shot up by 62 per cent compared to 2019.

In Osh province, Saferworld and Foundation for Tolerance International support Local Crime Prevention Centres (LCPCs) – in which representatives of the government, police, activists and community members work together to prevent crimes and help people to solve day-to-day safety and security concerns. During the pandemic, these groups adapted and found new ways of working via online platforms to address problems like domestic violence and overcome a reluctance to report or discuss safety issues. Read stories from each district’s LCPC below.

Improving responses and sensitivity to domestic violence in Gulcho 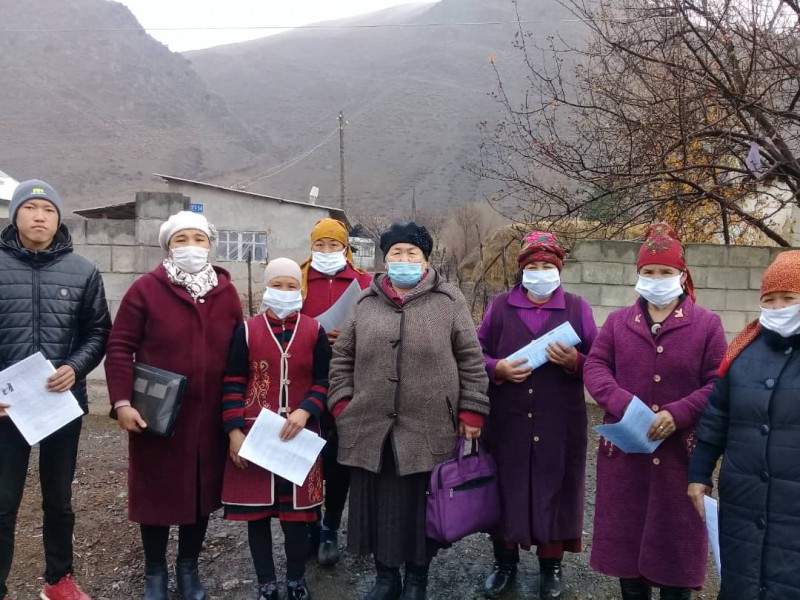 A women’s group in Gulcho disseminate leaflets on preventing domestic violence as a part of an outreach campaign supported by Saferworld and Foundation for Tolerance International.

In Gulcho (in the Alai district of Osh province), residents and activists were faced with the worsening situation around domestic violence during the pandemic, as crisis centres reported a huge spike in requests for support. LCPC members wanted to raise public awareness of domestic violence and to make sure that the police and other authorities were sensitive in how they responded to domestic violence incidents, and to also understood the new and difficult circumstances many women and children had found themselves in.

"Usually, women in our community don’t share problems related to domestic violence because they are ashamed and worry what people would say. They continue with their normal lives in front of others, despite facing abuse at home. That’s why support from the community is very important.”

One of these activities was a WhatsApp training for the Gulcho LCPC members to help raise awareness about the issue and provide guidance on how to better respond to cases that arise in the community. “We decided to open a WhatsApp group due to COVID-19 and the rise in cases of domestic violence,” said Anara Tokoeva, a leader of a women’s initiative group. “We wanted to create a platform for community leaders to unite and discuss joint activities to resolve and prevent such cases. Usually, women in our community don’t share problems related to domestic violence because they are ashamed and worry what people would say. They continue with their normal lives in front of others, despite facing abuse at home. That’s why support from the community is very important.”

The WhatsApp group particularly focused on barriers to reporting and on addressing the collective silence around domestic violence. The hope was that by becoming more sensitive to these cases and sharing their knowledge with the community, they would also lessen survivors’ hesitation to discuss the problem with relatives, friends or even the police.

During the WhatsApp training, participants learnt about the different types of domestic violence, including physical and psychological, as well as existing legislation and procedures to address them. They then used the WhatsApp group to discuss the training and the issue more openly. Participants were also encouraged to reach out to residents in small communities, who may keep quiet about cases for fear of exposing what are seen as ‘family issues’ publicly. Community leaders, who are also members of the LCPC in Gulcho – including elders, women’s and youth committee representatives, and local authorities – expressed a more open attitude to the problem than they had in the past, and showed a willingness to address it. They put survivors of domestic violence in touch with members of the LCPC, police and services, who would then provide follow-up social and material support. This training was complemented by an outreach campaign through the LCPC which provided information for residents on domestic violence, legal rights and contact information for needed support services (including crisis centres).

Addressing violence against minors in Tepe-Korgon 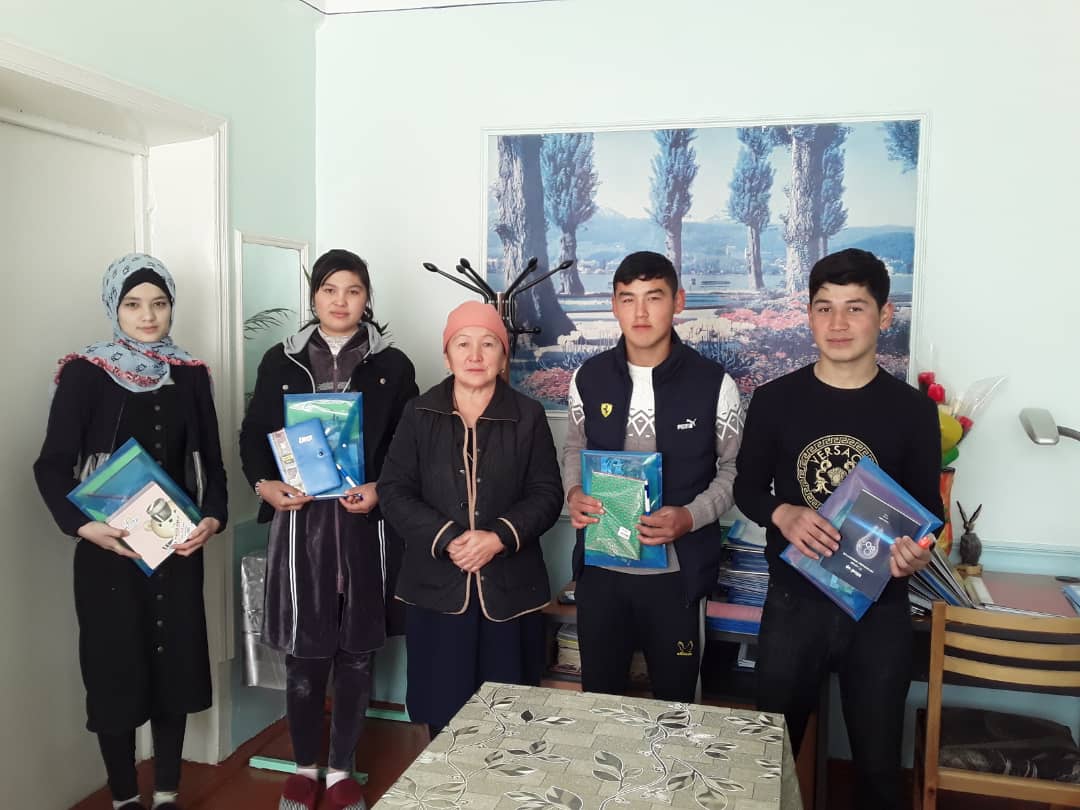 A social counsellor in Tepe-Korgon posing with the winners of the student contest.

In Tepe-Korgon (in the Aravan district of Osh province), LCPC members raised the issue of violence against young people at home. This can be worsened by a range of issues, including the effects of labour migration and the resulting childcare arrangements (because their parents have to work in other country, many children end up living with relatives where they may face abuse or psychological stress), unemployment, an absence of extra-curricular or creative outputs for young people, and overstretched social counsellors and police officers. It became clear that school counsellors, crucial partners of the LCPC because of their close work with children and young people, had never been trained to deal with youth crime prevention or the prevention of violence at home. To address this issue, the members of the LCPC organised offline trainings for about 20 teachers and counsellors on how to sensitively detect and handle cases of violence against children at home, as well as sessions on the legal rights of minors and the different types of violence that young people may face. The LCPC members also began a WhatsApp group for those who had received training, where they shared ideas and came up with plans for addressing and preventing this problem in their communities.

Afterwards, to put the lessons learnt into practice, the counsellors organised an online contest for schoolchildren, inviting video and artistic submissions about what makes a peaceful home and a safe community. This helped raise awareness and showed their interest in supporting children.

"It was a difficult time for children, as some faced abuse at home, and some had to work in the field picking cotton and didn’t have time for their online studies. For the contest, some schoolchildren made a video about their family, parents or friends. It was really nice to see them inspired [by the project].”

“The main goal of the contest was to raise interest in education [during COVID-19], when many schoolchildren take classes online,” said a school counsellor in the town. “It was a way to learn about their families, how they feel – happy or worried. Many parents work as labour migrants and couldn’t come back [from abroad] because of the closed borders, while others could not leave the country [as they usually do]. It was a difficult time for children, as some faced abuse at home, and some had to work in the field picking cotton and didn’t have time for their online studies. For the contest, some schoolchildren made a video about their family, parents or friends. It was really nice to see them inspired [by the project].”

Members of the LCPC also realised the importance to having two-way communications between them and the communities in conducting crime prevention work. “We started to cooperate actively with the school counsellors,” said Samargul Bekbolotova, chairperson of the women’s council in Tepe-Korgon. “Together, we are planning to work with the children of labour migrants to provide to them moral and psychological support. The government provides great support in helping organise different activities. Every six months, we organise reporting meetings with the community and local authorities, informing everyone what activities we conducted, what the results were and what issues the population faced.” 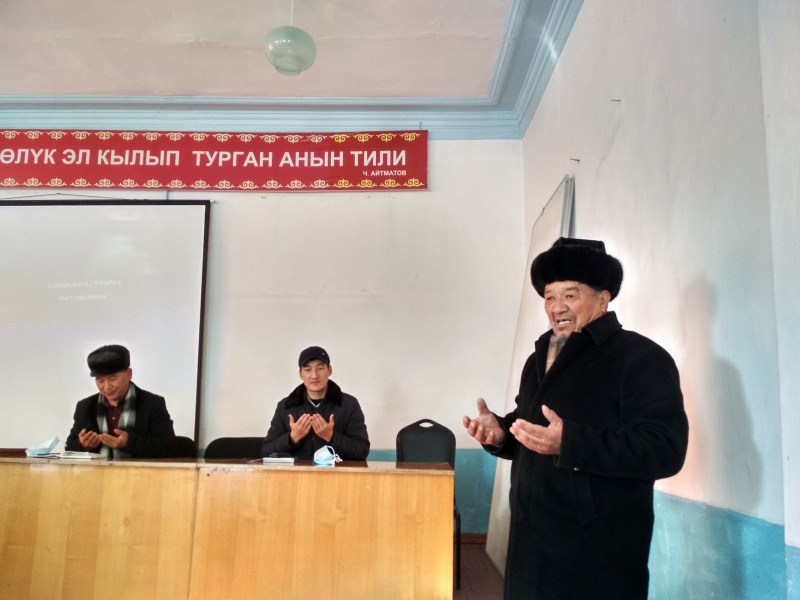 Members of Uzgen LCPC in a meeting about their action plans.

In Uzgen and Kurshab (in Osh province), members of the LCPCs started to disseminate information about their work in preventing crime and addressing security and social concerns via social media pages on Facebook and through WhatsApp chat groups. Although this work has just started, it will allow them to reach a larger audience and inform them of upcoming and completed activities related to crime prevention. It should also contribute to an increased interest among the community to build online dialogue platforms and to participate in discussions on security issues.

“Most people in our community contribute to solving problems and social networks are a dialogue platform for all of us,” said Kalberdiev Sabyr, the chairperson of the youth committee of the Uzgen LCPC. “The population has the opportunity to keep abreast of everything and give timely feedback.” 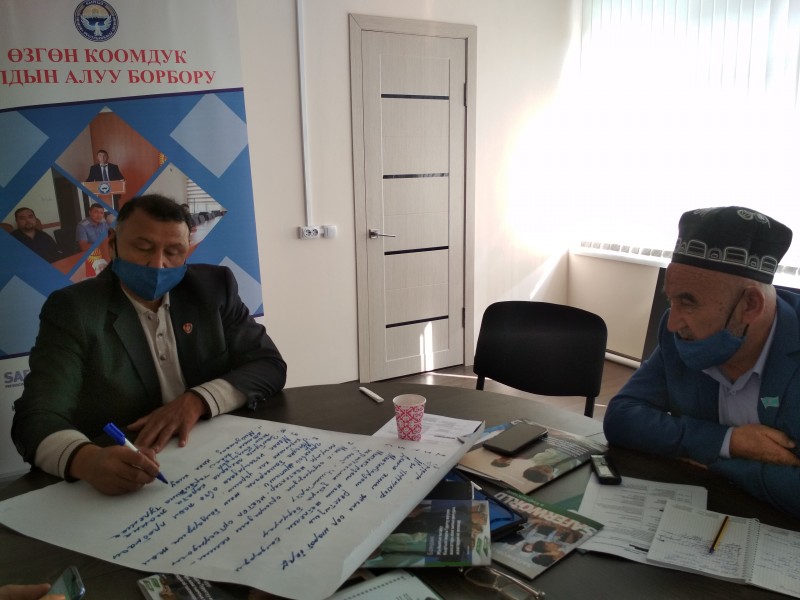 In Kurshab, the LCPC used social media videos to share what they had been up to and elicit responses from the public. "We started to disseminate the video report among the communities via social networks because of COVID-19,” explained Ashirov Nurmamat, the chairperson of the Kurshab LCPC. “Before, we used to conduct activities in the fields in-person. In the seminars organised within the community policing project, we learnt to use modern digital opportunities in our work. By using these skills, we managed to distribute the video report on social networks and draw public attention to the work of the LCPC."

Although COVID-19 brought many new challenges that required people to adapt and find new solutions to addressing problems, it has also showed the resilience of civil society and activists in meeting people’s needs and ensuring safer communities. Based on the experiences of the last year, many activists in Osh province now feel more prepared to adapt their work and coordinate with the government and NGOs to meet future challenges head on.