Inspired by real life events, Saferworld has produced a short film showing the important role women in Nepal can play in providing security, particularly in the police force.

Women face many challenges to their safety in Nepal. Domestic violence is widespread, reflected in the fact that Nepal is one of the few countries in the world where women have a lower life expectancy than men. The problem is compounded by the low number of female police officers, which makes it difficult for women to report crimes. The majority of cases of rape and violence against women go unreported and justice is rarely sought or delivered.  Many Nepali women feel they cannot confide in male police officers, leaving the perpetrators unpunished and the women themselves at risk of repeat attack.

The film, presented in the form of a docu-drama, is based upon the findings of Saferworld research into gender-based violence and discrimination in Nepal, case studies of victims and discussions with community members and police officers. It demonstrates how female police officers can strengthen security delivery in the country, especially in response to sexual and gender-based violence. However, it also reveals how a conservative culture and limited resources prevent many women from taking on frontline policing roles and rising through the ranks.

As a female police officer in Kathmandu explains, the restrictions on women working in the police force “make our work difficult as we do not have facilities like separate sleeping quarters and toilets or day-care centres for our children. We cannot afford to leave our children unattended as in Nepal the responsibility of taking care of children falls solely on the mother. Having infrastructure and policies that support motherhood would enable us to deliver more on our job.”

With support from local partners MIREST, Saferworld held public screenings in 20 districts across Nepal, enabling over 5,000 people to watch the film to date. The film has also been broadcast by two national TV channels enabling it to reach a wider audience. After each screening the floor was opened for discussion between community members, police and other local security providers, authorities, civil society and political parties. In some locations it was the first time the community had seen a female police officer.

Encouraged by requests from the audience to show the docudrama in local languages, Saferworld has now dubbed the docu-drama in five different ethnic languages to ensure that the message of the docu-drama reaches more people in remote locations, who often only speak their local native language. In addition to English and Nepali, the docudrama is also available in Maithili, Bhojpuri, Awadhi, Magar and Doteli. 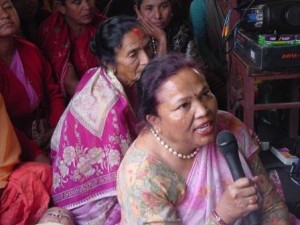 Many women who watched the film felt that they could empathise with the case studies shown in the docudrama and were encouraged by the depiction of successful female police officers. A journalist in Palpa said that, “I feel really proud that my own daughter would like to join police and become an inspector in the future…..Women are essential in police because they …. can handle cases in a gentle, sincere, responsible and calm manner which can attract victims to seek justice.”

The screening also created space for communities to raise sensitive issues. For example, a male teacher in Salyan pointed out that certain cultural practices such as ‘Chhaupadi’ (whereby menstruating women must stay in small huts away from the home) put women at greater risk of violence.

Julie Brethfeld of Saferworld said that many women already play a crucial and effective role in the police and armed forces. “We need to recognise the important work that they are doing and work with the police to help them respond to the needs of women."