Although these relationships are often characterised by mistrust, partnerships between the police and young people can be a strong foundation to improve safety and security in a community. The two stories below from Jalal-Abad and Batken provinces of Kyrgyzstan highlight examples of a young leader and a police officer who work collaboratively with their communities for increased safety. 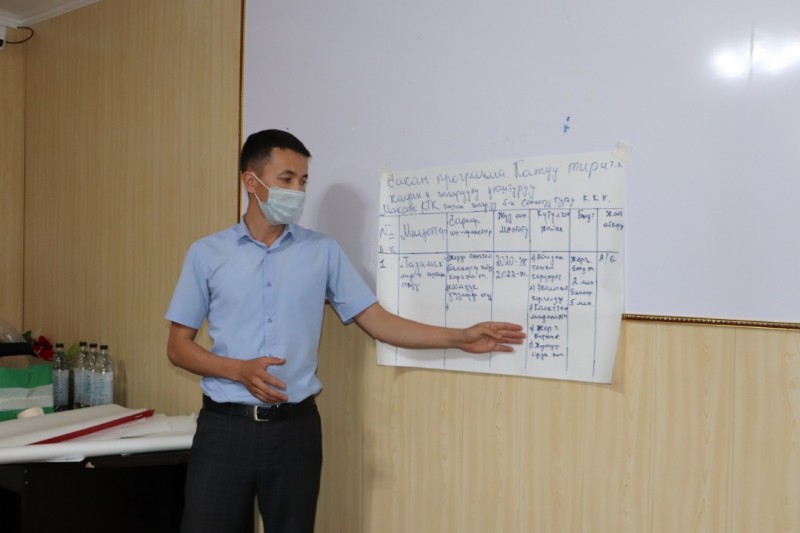 Dostuk is a municipality made up of several multi-ethnic villages, together comprising around 10,000 people in Kyrgyzstan’s Jalal-Abad region, near the border with Uzbekistan. Because Dostuk is relatively small, in the last few years its Local Crime Prevention Centre (LCPC) – an initiative traditionally made up of representatives of elders, women’s groups, youth groups, and authorities who come together regularly to identify and address local security problems – has also become an active hub of civic life. However, despite the fact that Dostuk LCPC is an active centre for many, young people have traditionally been less involved in its activities and in wider civic activism within their community. This is partly because of societal norms in the region which dictate young people should be deferential to elders, but also because of the nature of LCPC work which is voluntary and unpaid. For many young people struggling to earn a living, they often end up migrating within Kyrgyzstan or abroad to look for better job opportunities. As a result, young people’s participation in a lot of LCPCs tends to be lower and with a high turnover.

“I believe that I should help my community, and I consider it a duty. Since our community is far from the country’s administrative centre, we have to take matters into our own hands to improve the prevention of crime in our community.”

This low level of participation is in contrast to the fact that many of the issues that LCPCs address are related to young people. These issues include fights among young people, extortion and racketeering in schools, and challenges faced by the children of labour migrants – a common case in Kyrgyzstan where parents have to work in other country and many children end up living with relatives where they may face abuse or psychological stress. As many members of the LCPC have acknowledged, any meaningful solutions to these problems must be developed jointly with young women and men, who have the best understanding of challenges faced by their generation.

Together with Foundation for Tolerance International we worked with Dostuk LCPC to increase young people’s participation and activism. In order to do this, the LCPC reached out to a local youth activist, Syimyk Talantbek uulu, to join the LCPC as a representative of the youth committee. He agreed to join the initiative and this move encouraged other young people to help contribute. “I believe that I should help my community, and I consider it a duty,” said Syimyk. “Since our community is far from the country’s administrative centre, we have to take matters into our own hands to improve the prevention of crime in our community.” 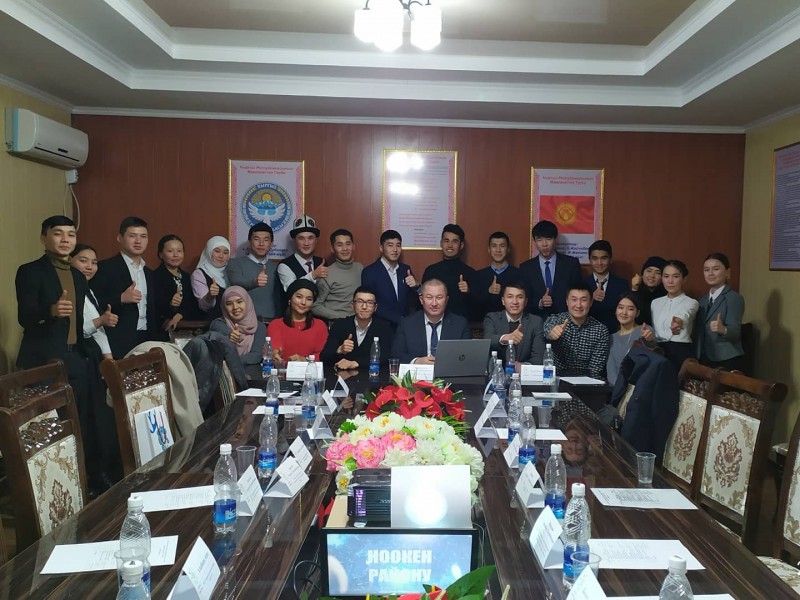 The Head of Dostuk Municipality Mr. Mamasadykov (middle) with young members of the Dostuk LCPC.

Since he joined, Syimyk has found that the LCPC has seen a huge rise in the number of young participants, and that young people have really felt they have a stake in local activism and their community’s security because he is an influential figure and seen as a champion for young people’s concerns. The action plans developed by the LCPC reflect this change, with activities that directly target young people. The elders and women’s committee, which had often led planning sessions in the past, now give ground to the newly joined young participants, who helped the LCPC develop increasingly relevant activities based on their own analysis with other members of the centre. With young people making up about 30% of Kyrgyzstan’s total population, members of the Dostuk LCPC feel that their example is a strong one that should be replicated more widely across the country. “We want young people to become more active,” said Syimyk. “We want our team to expand. This is the only way we can spread out positive experiences to other communities.” 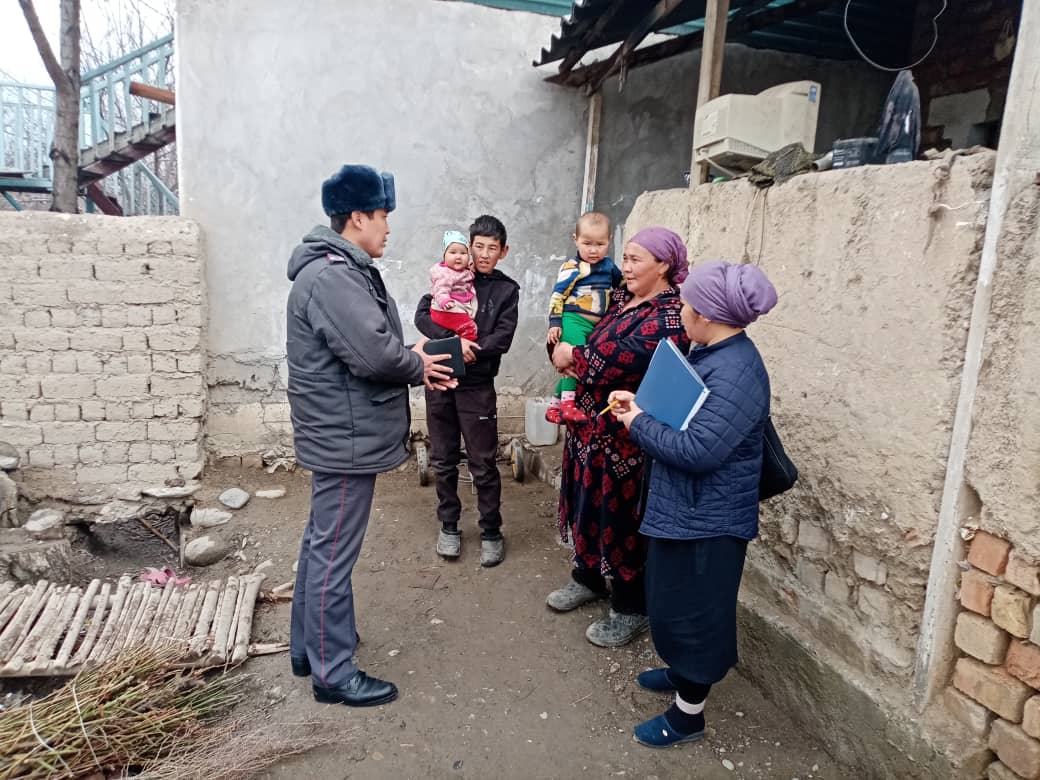 Many often associate the police with the more prestigious specialised crime response units or those carrying out detective work. But in communities across Kyrgyzstan, neighbourhood and juvenile police inspectors are the ones doing a lot of the crucial work in addressing security concerns of residents. They are familiar with community members, understand the safety challenges they face, and get involved in the activities of LCPCs. Saferworld and Foundation for Tolerance International have been working to advocate for healthier and stronger relationships between community members and police officers, and to overcome the historic mistrust between residents and the police force.

Musa uulu Akzhol is a juvenile police inspector in the Ak-Sai village of Batken province, in the south-western part of the country. The village of Ak-Sai faces particular challenges as it lies along the border of Tajikistan’s Vorukh community, where clashes and conflicts over land or resources often arise between citizens, involving young people from either side of the border. According to Akzhol, the ever-present tensions due to the border situation make it difficult to work with communities sometimes and it also increases the risks of young people getting drawn into violence. This is further complicated by inter-generational tensions, where young people feel a lack of autonomy or pressure to adhere to the wishes of their elders.

“Now, I often help with things I wouldn’t have normally done – for example, I organise sports games, meetings and conversations so that adolescents and young people have a productive outlet for engagement, and which helps reduce the likelihood that they will turn to crime or violence.”

As juvenile police inspector, Akzhol works with young people to address their problems, ensure they are supported, and to prevent crimes or misdemeanours among vulnerable youth. His role also involves working with families to ensure young people are protected and free from abuse at home. But his role does not end there – as a member of Ak-sai LCPC he also works with the community to develop and implement crime prevention plans. “For the last few years, I have been attending workshops on improving my communication skills, and increasing my understanding of working with adolescents in a way that is more sensitive to conflict and gender”, said Akzhol.

“I’ve learnt that it is important to establish trusting relationships, try to understand [different perspectives] and help guide people [toward a constructive solution]. Now, I often help with things I wouldn’t have normally done – for example, I organise sports games, meetings and conversations so that adolescents and young people have a productive outlet for engagement, and which helps reduce the likelihood that they will turn to crime or violence.”

Akzhol recently organised educational materials such as textbooks from institutions and individuals to vulnerable children who do not attend school, with the enthusiastic support of villagers. This initiative also raised the issue of families who do not receive social assistance benefits within the communities, leading them to follow up with the appropriate authorities to ensure they receive the needed aid.

Seeing the results of such activities, Akzhol says he is more motivated to work proactively on other issues. He began to put in place some preventive measures to identify children in difficult situations, talk to them in order to protect them from crime and from being recruited into criminal groups. He says it is an example of how complex and interconnected crime prevention issues are, and how important it is to build trust with both children and parents. Now both parents and children call him or sometimes just phone to say “hello”.