Land is a very important and sensitive resource for people in Northern Uganda. Many internally displaced persons, some of whom have spent over 20 years in camps, have now returned to the region, which has increased competition over access to mineral and land ownership. This has resulted in heightened tension and violence. This photo gallery illustrates some of the issues experienced by people in Northern Uganda and how we are working with them to find solutions.

“There is evidence that land conflicts are not only a challenge in northern Uganda, where people are recovering from the effects of a 20-year civil war, but are also destabilising the rest of the country.”

Saferworld has been working with communities in Northern Uganda since 2001, mainly focusing on supporting civil society involvement in conflict prevention and security provision, conflict-sensitive approaches to development, and advocating for stronger national and regional controls on small arms and light weapons.

Read more about our work on conflict-sensitive approaches. 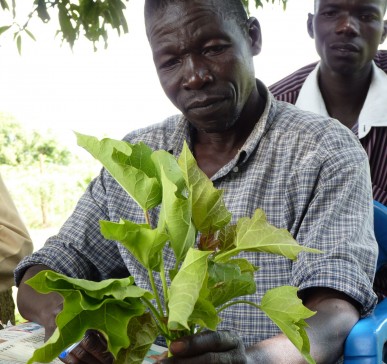 Photo: A participant in a focus group discussion displays a type of tree that the Langi people traditionally use to demarcate the boundaries of their land.

Since the end of the conflict between the Ugandan government and the Lord’s Resistance Army in 2006, progress has been made in rebuilding the devastated north. However, many communities in Northern Uganda remain in a state of latent conflict, burdened by inadequately addressed war legacies and deep-seated grievances against government institutions. This makes them vulnerable to a relapse into violence if significant triggers occur. In this context Saferworld has been working as part of a consortium to promote conflict-sensitive development and land governance – putting these issues on the national agenda.