'Leaving no one behind': Speech to the High-level Political Forum on Sustainable Development

The following speech was given by Anna Möller-Loswick, Policy Officer, to the High-level Political Forum on Sustainable Development at the United Nations headquarters in New York on 18 July. The event brought together governments, UN agencies and civil society to review progress towards meeting the Sustainable Development Goals

Conflict and violence are on the rise, and if we carry on with business as usual almost two-thirds of people living in extreme poverty are likely to be living in conflict-affected and fragile states by 2030. Across the world, nearly 40 percent of people do not feel safe walking home at night. Violence and insecurity are universal challenges, but their burden falls most heavily on the most marginalised. We cannot afford to leave them behind.

Last year, world leaders made a commitment to promote more peaceful, just and inclusive societies - one of five global priorities. If this commitment is to amount to more than rhetoric, we must do four things:

First, in all countries we need to build genuine peace, underpinned by justice, inclusion and political freedoms for all – and we must be able to distinguish this peace from unsustainable stability enforced through the gun. We also need to challenge the patriarchal gender norms and systems of power, that lie at the heart of gender inequality, and that can play a role in driving violence and insecurity.

Second, at a time when the world seems to shift from one crisis to the next, our international community needs to move away from the short-term securitised responses that we all know and accept to be ineffective. The 2030 Agenda sets out a 15-year vision, and we must use it to support the committed change-makers who exist within every government and every society. Technical and financial support is important, but it is real political backing and solidarity that matters most.

Third, international actors need to do some soul-searching to ensure that they are not part of the problem: are they for example, worsening insecurity through exploitative commercial investments? Are they entrenching a securitised status quo through arms exports? Are they enabling the theft of a country’s resources through their own banks and financial systems? Development cooperation in today’s globalised world is as much about domestic policy as it is about foreign policy.

Fourth, we need to generate new data if we are to be able to assess whether the promises made in the 2030 Agenda have been met. In a framework of goals and targets, data is the currency of accountability. We can fill data gaps by investing in our National Statistical Systems with money, training and, just as importantly, measures to ensure they have total independence in line with international standards. Other stakeholders also play an important role in producing data, such as research organisations, UN agencies, civil society organisations and citizens themselves: we need to harness their capacity to create much more pluralistic data ecosystems. Leaving no one behind is not only about who is counted, but also who is empowered to do the counting.

Many millions of people have been left excluded from peace and stability to face disproportionally high levels of violence and insecurity. Now is the time to address this exclusion and to recognise our capacity to address it.

You can watch the video of the address here, starting at 1 hour and 27 minutes.

Find out more about Saferworld’s work on the 2030 Agenda.

“At a time when the world seems to shift from one crisis to the next, our international community needs to move away from the short-term securitised responses that we all know and accept to be ineffective.” 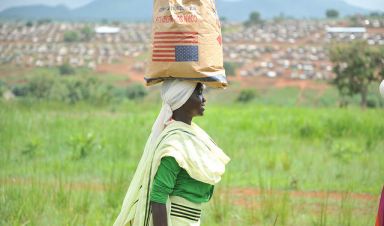 Keeping USAID: why the US shouldn’t cut off its nose