Empowered Citizens: changing the landscape of local governance in Nepal

In an informal conversation with a local political leader from a village in the western part of Nepal, I asked a question. “How is the Village Development Committee (VDC) utilising the allocated budget for women’s empowerment?” He smiled mildly and said, “There’s nothing to spend on for women’s empowerment, so we used last year’s budget to upgrade the main gravel road in the village.” I embarked on this probing inquiry with the knowledge that the condition of women in this village was very poor, and the portion of the budget meant for their use was being used to upgrade the road. His reply was surprising, as he argued that the women of the village also used this road so it was to their benefit too.

In Nepal, the budget planning process is supposed to follow 14 steps, from the sub-national to the central government level. In principle, it is actually meant to begin from the lowest administrative unit, the ward, collecting feedback from the people on their needs, and going up to the central level, so that the collective inputs can take shape in the form of the annual budget and programme. Despite its beauty in principle, the process is often hijacked by a handful of elites, to further their vested interests in the budget. When it comes to the implementation of this bottom-up budget planning process, it is frequently manipulated, as in the abovementioned case. The problem is further compounded by the general tendency of citizens to not challenge unresponsive and unaccountable local services. Although the 2006 Comprehensive Peace Accords formally ended the decade-long conflict and were meant to pave the path for peace and development – community-level tensions persist and are further exacerbated by such disenfranchisement and marginalization of community groups from the development planning process.

The Community Initiatives for Common Understanding (CICU) initiative implemented by Saferworld enhances community capacity, especially of youth and marginalised members, to engage in local development processes by identifying, cultivating, and implementing their own local solutions to local conflict issues in order to foster accountable local development.

CICU aims to mobilise and engage community members in the local planning process, fosters collaboration and coordination with key local development stakeholders, such as political parties, local government authorities, civil society organisations (CSOs), and community-based organisations (CBOs). The initiative essentially tries to break dialogue barriers between community elites (political parties, local government authorities, community leaders, etc.) and community members. It helps conflicting groups to foster greater mutual understanding of grievances and helps them to collectively identify development activities and collaborate on their implementation as a means of reconciliation and rehabilitation. It also seeks to increase awareness of district and national level government actors about conflicts and their underlying conditions and how they can be addressed through development and rehabilitation programming.

The CICU initiative has been implemented across 15 Village Development Committees (VDCs) in five districts of Nepal: Sunsari, Banke, Bardiya, Surkhet, and Kailali, forming two inclusive groups (the Youth Group and the Reconciliation and Development Forum), representing community diversity in terms of caste/ethnicity, gender, and geographic representation. It has been able to mobilise communities and help them identify and advocate on a range of issues and, including acquiring citizenship for women, providing traditionally marginalised groups access to local development budget allocations, mitigating resource-based conflicts, challenging traditional norms and values by addressing child marriage and other different forms of gender-based violence, and promoting social inclusiveness for just and peaceful communities - issues that touch upon the heart of unresolved grievances stemming from 10 years of civil conflict and profound marginalisation. In Pahalmanpur VDC, Kailali, data of 300+ women without citizenship was collected. Community members advocated local stakeholders and authorities for citizenship provision. A camp was conducted in collaboration with district authorities, enabling 715+ community members - including 437 women- to receive citizenship.

Over a period of 3 years, the initiative has reached more than 26,000 community members, with 53% identifying as female, and impacting more than 51% of marginalised caste/ethnic community members.  30 inclusive groups have been formed in VDCs, with 55% female participation and more than 60% marginalized caste/ethnic groups as members. While youth were formerly considered as ‘troublemakers’ within local communities, youth are now serving voluntarily in the VDC level mechanism to improve governance processes.

These are just some early results. Key to these results has been the approach taken by the initiative. Communities are approached to form their own groups inclusively reflecting the gender, caste, ethnic, and geographic composition of the VDC. The groups are formed through multiple, thorough consultations among the community members and stakeholders. After the formation of these groups, capacity building is carried out on communication and negotiation skills, conducting local context analyses, and community mobilisation in order to help them identifying their pressing issues of local development. The groups later develop their own action plan in consultation with local stakeholders including government authorities, political, and social leaders to work over the period of two years as a strategy to address the identified issues in close collaboration with VDC, CSOs and CBOs. The action plan consists of unique activities built upon on the social and cultural practices to mobilise community and stakeholders. The activities have raised awareness of the communities to demand inclusion in local governance processes and behaviour change to break traditional norms and values.

Salman Khan, a youth group chairperson supported by CICU, belongs to the minority Muslim community.  In an experience-sharing event, he explained his participation in the 14-step budget planning process and the importance of the initiative. “I would not have known or cared about the budget planning, if I had not been a youth group member. Now I am not only participating in the budget planning process, but also encouraging others to participate, because it is so crucial that we community members should participate and bring our needs and concerns into the planning process. I also take leadership by posing questions on implementation to local authorities and political leadership. Now I am well accepted by the community as a youth leader, despite being a Muslim among a Hindu majority. I am invited to the meetings, and local leaders and authorities listen to me.”

The youth group chaired by Salman Khan has been able to acquire a VDC block grant for their action plan activities, which raise awareness of and rally citizens against child marriage. They also received land and financial support from the VDC to construct a ‘peace room’ – a neutral community facility to conduct dialogue and interaction. It was the first time in his VDC that a VDC block grant was allocated for a youth-led group, in appreciation and recognition of their impactful volunteer engagement in local development. Through a series of interactions and dialogue, the youth group also informed key local stakeholders about domestic violence, and convinced them to sign a written commitment to work against domestic violence. Salman Khan represents many others who have had similar experiences of empowerment and enhanced, informed participation in the local development process. Though it is gradual, initiatives like CICU have contributed to the amplification of citizens’ voices, and have built community capacity to demand reforms in governance.

Unlike the famous Bollywood star Salman Khan, Salman Khan from the Bardiya district of Nepal has emerged as a real hero for the local youth. Previous generations of youth like Salman Khan have lost opportunities amid 10 years of civil conflict in Nepal. This has been changing gradually, despite a bumpy and prolonged transition after the civil conflict ended in 2006; Salman Khans are rising from rural Nepal, co-creating a promising future for them at a crucial time for the country, where a long-awaited new constitution has recently been put into practice.

Nepal’s new constitution restructures the country as a federal state, reflecting civil movements built upon people’s aspirations for peace and stability. The new constitution has spurred hope of institutionalising fair, open, responsive, and accountable services; meaningfully including diverse groups in governance and development; and addressing marginalisation. The lack of initiatives tackling these issues was a major driver of conflict.

Nepal is on the verge of opportunities, but faces myriad challenges. As I said above, the promising 14-step budget planning process has been manipulated by elites to fulfil their personal interests and has restricted the participation of ordinary people in the process. Similarly, the use of the budget for ‘women’s empowerment’ for upgrading the road was not challenged by community members, even women. The aspiration of a restructured Nepal will come to be realised when there are active citizens demanding open, transparent and responsive government, and a strong civil society amplifying the voices of voiceless. The CICU project is one step in that direction.

This blog was originally published on the Open Government Partnership (OGP) website. The OGP blog series came out of a collaboration between the United Nations Development Programme (UNDP) Bangkok Regional Hub and the OGP to find practical examples of how open government is helping countries achieve the SDGs in the Asia-Pacific region. For more details on the competition, the blog series, and how open government can help achieve the SDGs, please see OGP’s introductory blog post.

“The aspiration of a restructured Nepal will come to be realised when there are active citizens demanding open, transparent and responsive government, and a strong civil society amplifying the voices of voiceless.” 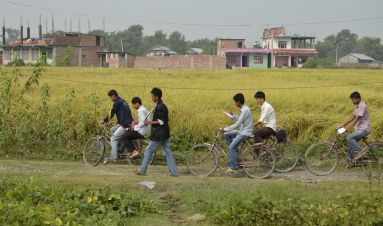 Youth and peacebuilding in Nepal 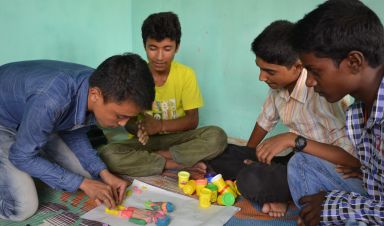 Supporting youth as peace-builders and change-makers in Nepal 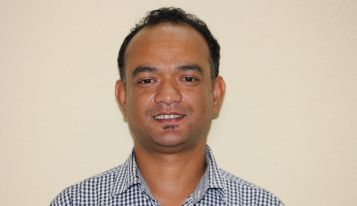 Ashim is the Nepal Country Manager for Saferworld, where he supports project implementation and plans and monitors the country strategy.