Fighting marginalisation and exclusion in Nepal 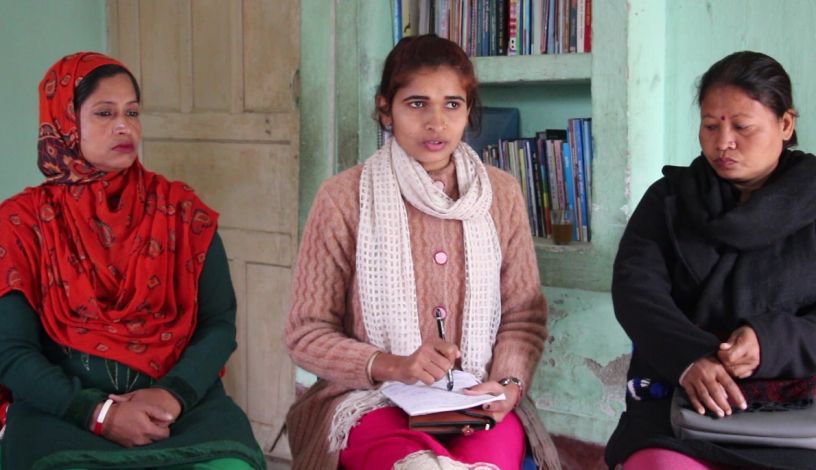 Following a visit to Nepal’s Sunsari and Siraha districts, Ilya Jones outlines some of the accomplishments and challenges faced by partners and communities in their peacebuilding work.

Nepal has a unique and complex social fabric, made up of different castes, ethnicities, religions and languages. As my colleagues and I learnt on a recent trip to the Terai region of Nepal, this diversity is part of a rich cultural heritage, but also at times a source of social and political tensions. The 2015 constitution, which outlines a new federal system of governance, provides for inclusion and representation of minority groups who face marginalisation or exclusion. But discrimination persists.

When travelling around Siraha and Sunsari districts in southeast Nepal, we met with partners and communities who are at the forefront of efforts to push for change.

“It was very difficult at first,” said a member of one of our partner organisations Samagra Janutthan Kendra, which is based in Lahan. “When we started about 15 years ago, there was an active conflict and high insecurity among communities. We advocated respect for human rights, but the environment in which we operated proved very challenging. Things have improved since then, but we face new challenges such as shrinking civic space and unsettled local governments that can limit the work of non-governmental organisations like us.”

Despite these challenges, the organisation has been able to work with communities in over six districts in the southern plains – an area that has seen high-intensity political protests leading to several deaths in the last few years, especially when the controversial constitution was being drafted. They have facilitated dialogues between different religious, ethnic and caste groups, and have supported alternative mediation for problems faced by communities including domestic and property disputes as well as gender-based violence. “We worked with elders and religious leaders on cases that were brought to informal justice mechanisms, and stressed that certain crimes such as dowry-related violence and rape were criminal offences and should be referred to the police. We also worked with local governments to bring community voices to help decide how local development budgets should be spent to best meet their needs.”

After visiting our partners, we dropped in on a community group meeting at Dhangadi municipality where participants were discussing some of their main security concerns and how they could go about addressing them. Before they began their activities, the group told us how armed and criminal groups used to extort people, and that there was no police presence within a reasonable distance to address their security needs. When the police did show up, they would expect bribes, leading to distrust and suspicion. The community group, locally known as a ‘reconciliation and development forum’ (RDF) – met with the authorities and requested that a police presence be set up in the community, with the idea that if police were integrated into the community there would be more opportunity to improve public security and build positive relationships. 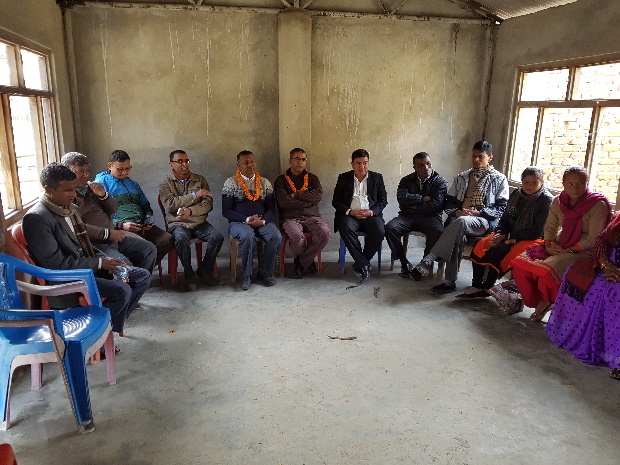 Community members speak at a reconciliation and development forum meeting.

The authorities were convinced, and as a result created a local police post in 2009, an effort toward which the community also donated resources – including bicycles, CCTV cameras and mobile phones so that they could be contacted by residents. Together, they identified and tackled a range of issues that had been leading to insecurity among the community such as violence against women and drug use. The safer environment led to businesses expanding into the area and bank branches opening locally. 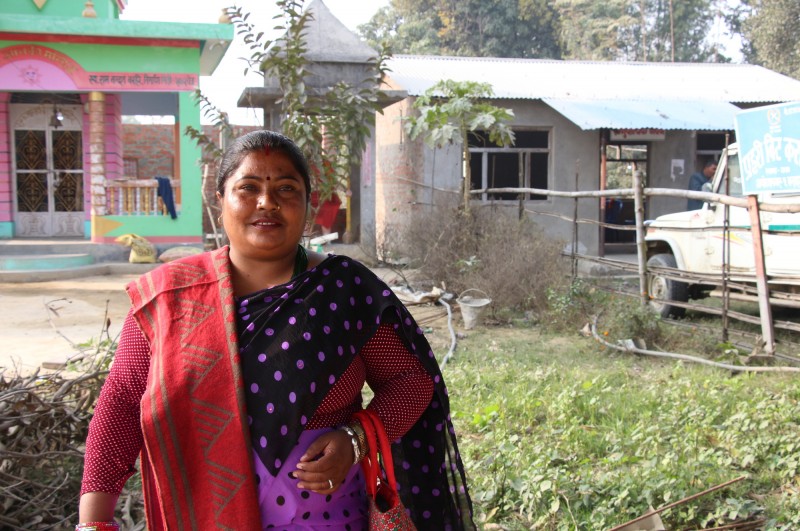 Phul Kumari Ram, a Dalit woman, who said the RDF helped her feel more confident to express her opinions openly, stands in front of the meeting space.

Our visit to Sunsari district the next day was no less impressive. Our first stop was to our partner in Inaruwa, the Center for Information Concerning Social Awareness (CICSA), which was set up in 1997 when the civil war between the Communist Party of Nepal (Maoist) and the government was at its height. As we heard from its chairperson, maintaining neutrality was difficult at the time given the prevailing ‘us vs them’ mentality. “We worked with both sides of the conflict to address people’s security needs – for example, by mediating resource disputes, helping to return stolen goods, freeing people from detention and circulating press releases to notify communities of arrests so that people’s whereabouts were known,” he said. Following the end of the conflict, the group worked with all parties – many of whom were now living side by side – to talk to each other and take the first steps toward reconciliation.

For the last two decades, CICSA has coordinated reconciliation and development forums that tackle different priority issues, such as minority, children and women’s rights. 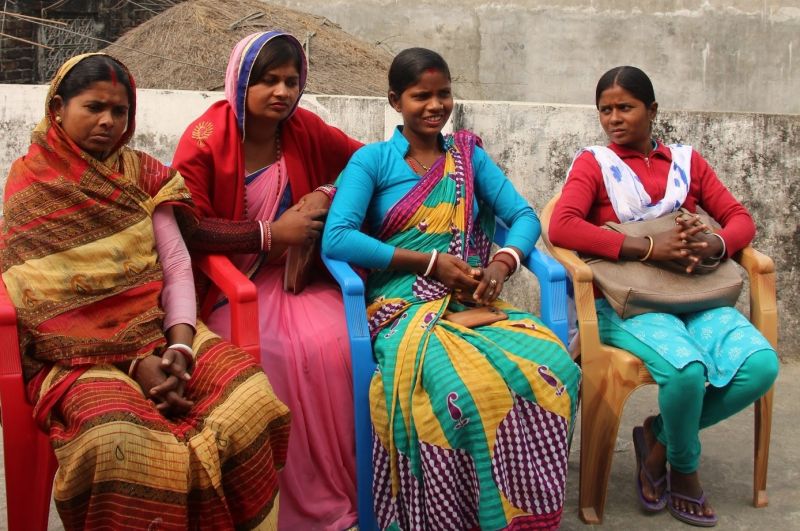 Four of the women from the community group in Laukahi village.

We visited one such group in nearby Laukahi village, which was made up of six women who were advocating for women’s and girls’ rights in their community. “We went door to door to speak out against violence,” said Rita, one of the participants. “We raised awareness of issues such as dowry-related violence – which is still a major concern – and around child marriage. Initially we were blamed for creating a divide in society when we talked about these things, but over time people began to see how we were helping women and how it benefitted everyone.” They told us of one harrowing case in which there was an outcry after a young girl was raped. “We put pressure on the local government and authorities until the perpetrators were behind bars.”

The women involved in the group said they were proud of their achievements, but wanted to do more to address the rights of girls and women, as well as look at drug addiction and alcoholism among men and boys. “Even though the project support has ended, we still meet a few times a month,” said Devani, one of the RDF members. “But we are also looking at how we can get more resources to tackle some more of the issues that we care about.”

Having been at Saferworld for almost two years, I had heard a lot about our community security approach and had read about examples in countries around the world. I also had a pretty good understanding of the process and the thinking behind it. But I hadn’t before spoken directly with people who had for many years been at its heart and who had helped achieve such impressive change. This gave me and my colleagues the opportunity to ask questions, to challenge our thinking, and to dig deeper into how a seemingly theoretical approach translates into action.

Click here to learn more about our work in Nepal. 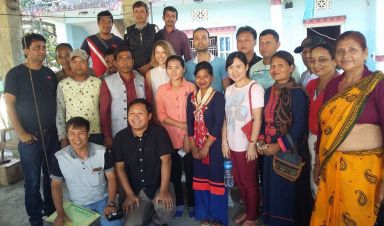 From Myanmar to Nepal: comparing experiences of conflict and peacebuilding 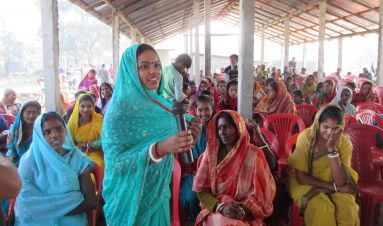 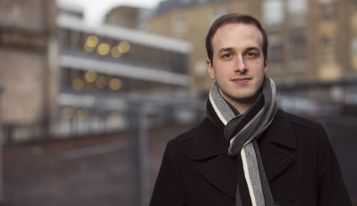