Belt and road: What does China’s ‘project of the century’ mean for peace and security? 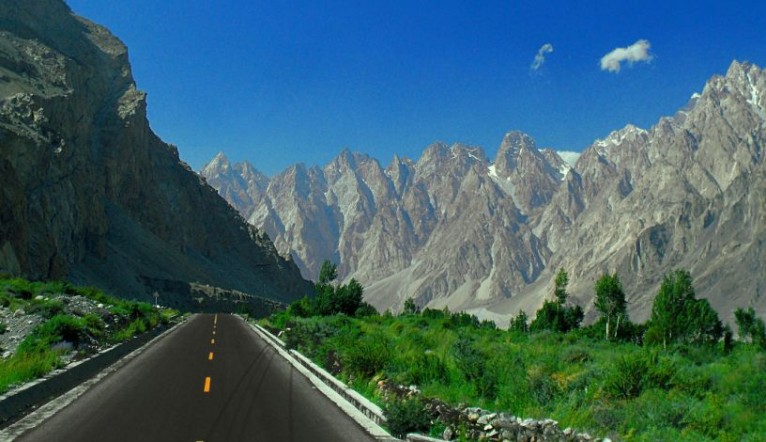 China’s flagship economic and development project – coined the Belt and Road Initiative – runs through many fragile and conflict-affected contexts. What are the factors China will need to consider to ensure their investments contribute to peace and security?

“Spanning thousands of miles and years, the ancient silk routes embody the spirit of peace and cooperation, openness and inclusiveness, mutual learning and mutual benefit,” declared China’s president, Xi Jinping, at the Belt and Road Forum for International Cooperation in May 2017. “The silk road spirit has become a great heritage of human civilization.”China’s flagship economic and development project – coined the Belt and Road Initiative – runs through many fragile and conflict-affected contexts. What are the factors China will need to consider to ensure their investments contribute to peace and security?

Since it was first unveiled in 2013, the Chinese global development strategy known as the Belt and Road Initiative (BRI) has grown to include over 100 countries and international and regional organisations across the globe – costing over a trillion dollars and encompassing investments and economic cooperation in construction, trade, transportation and energy. Recapturing the spirit of the ancient Silk Road, famously traversed by the likes of Marco Polo and Ibn Battuta, President Xi has dubbed it the ‘project of the century’. 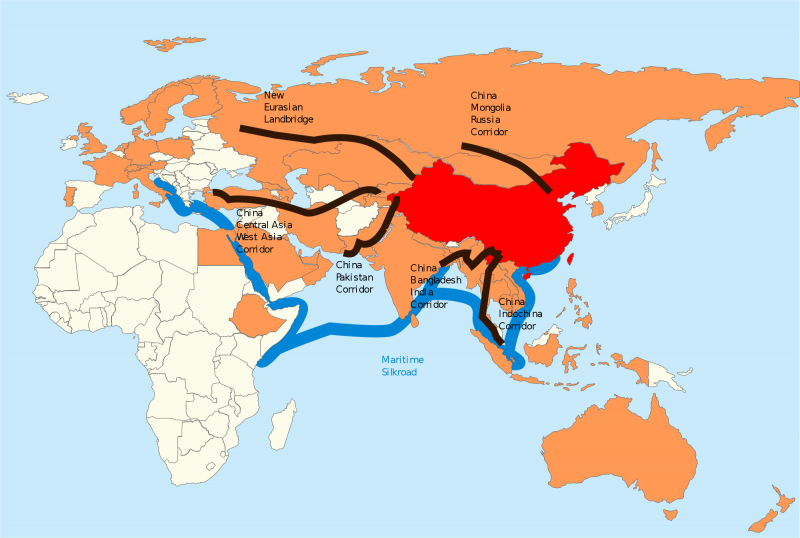 One of many maps attempting to make sense of the many Chinese investments that fall under the BRI. Source: Wikimedia Commons/Lommes

Many of the BRI’s ‘belts’ (or overland economic corridors) pass through fragile and conflict-affected contexts, where political and ethnic tensions can lead to violence. When Chinese investments and aid introduce new resources into already-sensitive environments, these tensions can be further enflamed especially where the benefits are not equally felt or are monopolised by elites. If these projects are designed and managed with peace and security in mind, they have a huge potential for good – creating jobs, providing expertise and credit, and increasing dialogue and connectivity. If managed poorly and without attention to political and social dynamics, they risk fuelling violence, division and instability.

We recently attended an event in Vienna exploring the BRI’s implications for peace, which brought together Chinese and other peacebuilders, academics and representatives from think tanks and businesses as well as government officials. Hosted by Saferworld and partner Austrian Study Centre for Peace and Conflict Resolution (ASPR), panellists explored specific contexts in Central and South Asia, looking at the different interests and conflicts affecting China’s neighbours, and sharing some of the concerns of communities on Chinese projects in their countries. Here we explore four of them.

Listen to the people

Panellists generally saw the BRI as an opportunity to bring development and peace to Asia. At the same time, many acknowledged that China needs to understand the countries in which it invests and operates – and carefully consider how its own actions can affect tensions and conflict risks. The Chinese participants saw China’s own history and experiences of rapid development as helping to inform effective investments overseas and promote international cooperation and connectivity, and some of them saw the immediate focus on economic development, rather than intervention in political or military affairs, as essential to create the conditions needed for peace. Others stressed the need for simultaneous work on addressing conflict drivers to accompany economic development through ensuring that investments and other economic engagement are sensitive to local contexts and do not worsen existing grievances.

During the Central Asia panel, we heard about some of the community views on Chinese investments in Kyrgyzstan and Tajikistan. Panellists said that Chinese investments are largely viewed favourably by communities, especially around much-needed areas such as energy infrastructure in Kyrgyzstan. However, there seems to be a lack of clear understanding of what the BRI is or how it will benefit people. Many communities expressed concerns that the procurement process was not transparent enough and had limited public consultations. This led to suspicion. Some communities were concerned that purely bilateral dealings with their governments might only line the pockets of elites without benefiting communities, and that there wouldn’t be enough attention paid to ecological impacts or the burden placed on future generations who would be tasked with paying back the debts. 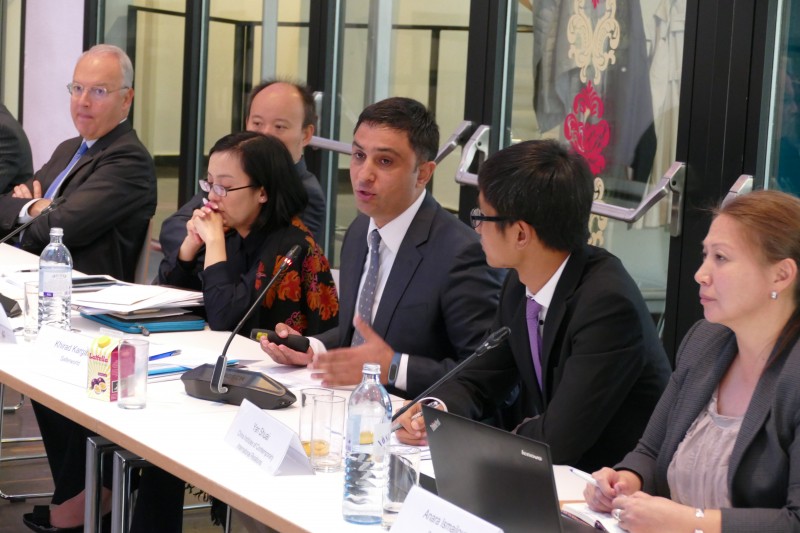 Many also wanted to see more investments in schools, clinics and support for community initiatives rather than a singular focus on infrastructure. The sessions on the Middle East and South Asia, especially discussions around the large-scale China-Pakistan Economic Corridor (CPEC), raised similar concerns and recommended much more consultation with communities and local authorities, rather than just the central government, to get public buy-in and promote stability. In Pakistan, for example, many worry that the multitude of Chinese investments could increase tensions between the central and provincial governments, as well as skew benefits to more affluent parts of the country.

Although the BRI is originally a Chinese vision, it can’t be realised in isolation. There needs to be a strong focus on cooperation both bilaterally and regionally. Panellists highlighted the lack of regional cooperation among the five countries in Central Asia on BRI projects, but pointed to recent warming relations between the countries as a promising sign. They also recommended greater coordination with Russia, which is still the dominant power in the region, as well as Europe and the United States. Without this coordination, there is a danger that the region will be torn between rival interests and that this could translate to local-level conflict. Regional bodies such as the Shanghai Cooperation Organisation and the Organization for Security and Cooperation in Europe (OSCE) were also raised as platforms for dialogue and cooperation on security issues in relation to the BRI. In the Middle East, one panellist highlighted the recent agreement between Arab League states and China to deepen cooperation on BRI as an encouraging step.

One presenter raised international agreements and frameworks as another avenue for collaboration. The Sustainable Development Goals (SDGs), which have near-universal buy-in from UN member states, is one way to encourage connectivity. Others like the Africa Agenda 2063 and the EU Strategy on Connecting Europe and Asia could also be used.

When discussing the security implications of the BRI, there has been much talk on how China can partner with governments and participate in regional security forums such as the Shanghai Cooperation Organisation to prevent terror attacks and tackle support for violent groups. But there have been fewer conversations on how to work with civil society and communities to address human security concerns.

Saferworld has long advocated for alternative responses to terrorism and migration that move away from securitised approaches and towards more people-focused solutions. To build conditions for peace and protect their investments, the BRI offers China an opportunity for deeper engagement with communities and civil society who have an understanding of what drives conflict and support for violent groups. It should also seek to ensure that the benefits of its investments and aid are felt by all, and that they aren’t fuelling resentment or grievances that could lead to violence.

So how can China ensure that its investments are promoting peace?

One method, which was also discussed at the event, is by encouraging partnerships between businesses and peacebuilders. Many organisations are already working with international companies to promote more sensitive investments and to mitigate risks of conflict. At Saferworld, we have partnered with Chinese companies, training them on conflict sensitivity and advising on how their work could benefit communities. In west Kenya, we facilitated dialogues between one Chinese company and residents so they could air their concerns around a construction project, we helped bridge cultural divides and provided recommendations such as buying local materials and accounting for livelihoods affected by the project. Many of these recommendations were taken on board.

Since 2012 when we started to work with Chinese businesses in fragile environments, we have seen a growing understanding among the Chinese policy and business community on the security aspects of overseas business engagement.

As the BRI enters its fifth year, it is high time for China and other countries to find more practical areas for collaboration that can contribute to sustainable peace and development. The event in Vienna was the first in what should be a long-term conversation between businesses, governments and civil society. Future dialogues should include more private sector partners, civil society and a range of voices in countries that will be affected by the BRI. There’s a lot at stake. If done well, such efforts can promote more exchanges of ideas, resources and help bring about some true ‘win-wins’ along the BRI. 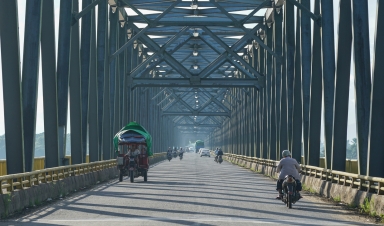 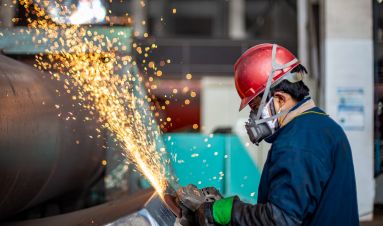 Ilya Jones is Digital Communications Coordinator at Saferworld, based in the London office.