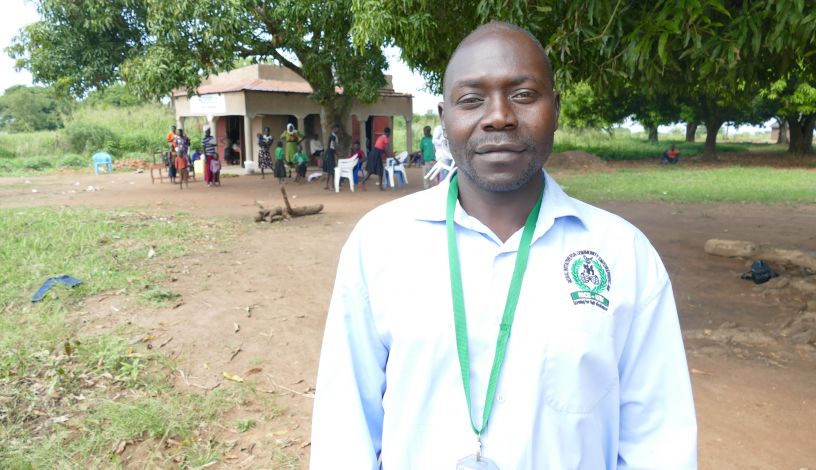 We caught up with Jackson Olema, who works for our partner in Uganda, to learn more about his organisation and their work.

Please tell us a bit about yourself.

My name is Jackson Olema, and I work as Manager for Operations with the Rural Initiative for Community Empowerment – or RICE West Nile, for short.

What issues does RICE West Nile work on?

We have five focus areas. Our first area is on community health in rural and hard-to-reach areas. Currently we are working on projects for people living with HIV – supporting health workers to distribute drugs such as anti-retrovirals – and on mobile clinics, which provide services and promote better health-seeking behaviours.

The second area is on developing crucial skills within communities, mostly with young refugees from South Sudan and some youth from the host communities as well. We develop vocational skills that can be used for generating an income – such as tailoring, baking, catering or becoming a mechanic. We also provide them with the necessary tools enabling them to use their new skills.

The third is on sustainable agriculture, where we train farmers to be able to produce crops that will generate income rather than just for their family’s subsistence. Because of Uganda’s growing population and demand for food, most foods fetch good incomes. The majority of the population, however, don’t take advantage of this because they don’t have the knowledge and skills for cash crop farming, and are losing out on opportunities to earn extra income.

The fourth area is on environment and energy. Because of changing demographics and the recent refugee influx in Uganda, many of the trees near the refugee settlements have been depleted out of necessity and for survival purposes. The refugees cut the wood for shelter, firewood and to sell. Some refugee settlements have become bare. We work with the refugees to help them restore the environment and teach the ‘guided consumption’ of fuel products. We also provide some energy saving technologies such as improved cooking stoves and solar home systems to reduce on biomass consumption.

The fifth area is an integrated humanitarian response, where we support refugees with peacebuilding, climate resilience practices and income generation.

What work do you do around peacebuilding and with preventing conflict between refugees and host communities?

We work with refugees and host communities to help them resolve issues that they identify. We started a new approach where we hold regular dialogues, which has really done wonders. If there are any conflicts or topics that are causing trouble in the communities, we ask people about them and ask them to prioritise the ones that are most important. After that, we invite different service providers in those particular areas to come talk to them to resolve the issues. Some of the dialogues are recorded by radio stations and get aired for wider listeners so that other communities affected by similar issues can learn from these forums.

At first, some of the service providers we worked with took it badly because they thought we were just trying to find fault with them or expose their flaws. But in the end the organisations realised that this sort of dialogue actually helps them and is an important part of accountability since they are able to get direct feedback from the people affected by their policies or services.

Following our engagement with the various agencies, they are now able to address potential issues with communities instead of waiting for conflicts to emerge. Sometimes the dialogues get a bit confrontational, but in the end people settle down and find that it is a constructive way to address problems. The radio dialogues also help the participants to improve their public speaking skills and raise their self-esteem, vent their worries and frustrations and therefore help alleviate some of their war trauma.

What are some of the issues that come up in these dialogues with refugees and host communities?

Most of the issues refugees raise are around service provision – water, healthcare and education. With the host communities it is more about resources – firewood from the environment, or issues around sharing water resources and land for cultivation. Most of the conflicts around these issues start from the individual level, but can be turned into group rivalries – for example a disagreement between two people can turn into a blame game with labels such as ‘refugees’ versus ‘host communities’ quickly resulting in serious escalations.

What have been some of your biggest achievements?

At the institutional level, I think one of our biggest achievements has been gaining a kind of reputation among donors so we are better able to secure funding. Right now we have funding from around 11 different funders.

On the ground we also have a lot of impact. If you take the tree planting as an example, we started scaling it up in the last year, and as of now we have planted more than 1.2 million trees. Our healthcare services have reached more than 15,000 people, and our vocational trainings have helped over 160 young people gain marketable skills. In the agriculture sphere, we are managing around 40 groups that help make improvements in their households by addressing food security.

In peacebuilding, we have made progress in addressing some really deep-rooted tensions through dialogues. Even though there is a lot of anger and some tribes have trouble sitting together, as you go on and talk to them they slowly start to believe that they are brothers and sisters. Many realise that those who caused the trouble are not there. The tribe is not the issue – it is the person who did wrong who should be held accountable.

What have been some challenges?

Our main challenge has been around funding. We are an organisation local to the West Nile region in Uganda, and we are still growing. We want to increase the scale of our activities, but as a local organisation we have the disadvantage of not being trusted with big funds.

There are also some challenges when dealing with government. We work at different paces – sometimes we non-governmental organisations like to take things faster, while the government might take a more cautious approach, or may have many other obligations to attend to. So this tends to slow things down, and this can be challenging especially when you have donor deadlines.

What kind of work have you done in partnership with Saferworld?

In partnership with Saferworld, we have worked in two areas funded by Irish Aid – the first is a project on natural and land resources focusing on land rights and gender empowerment.

We are also supporting Saferworld in conducting some research in the north of the country, looking at the relationships between refugee and host communities, especially around natural resource and land use.

What do you hope to achieve over the next few years?

Over the coming years, we would like to continue the work we are doing with Saferworld that is funded by Irish Aid.  We also want to focus on reducing the impacts of environmental degradation by planting more trees, protecting existing trees, managing waste and promoting renewable and clean energy technologies in both refugee hosting areas and hosting communities as well as other degraded areas.

We are focusing on ending hunger and increasing household incomes through farming and off farm income sources in order to reduce poverty.

We want to keep prioritising healthcare improvement, especially in rural areas, and we aim to reduce child and infant mortality and the impacts of HIV/AIDS by making healthcare services available and accessible.

We are also looking forward to building better lives for youth by improving their skills for income generation and for contributing to their communities.

Lastly we are looking forward to training refugees to become agents of peace in their own communities. 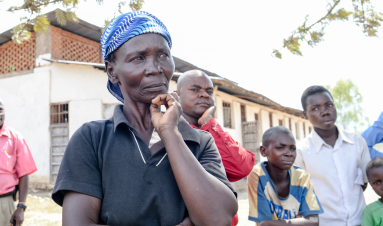 Working with government and customary authorities: considerations for peacebuilding practitioners 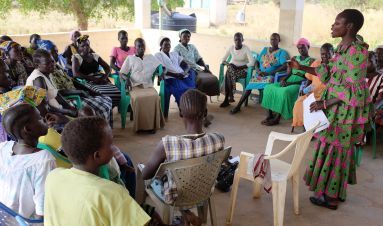