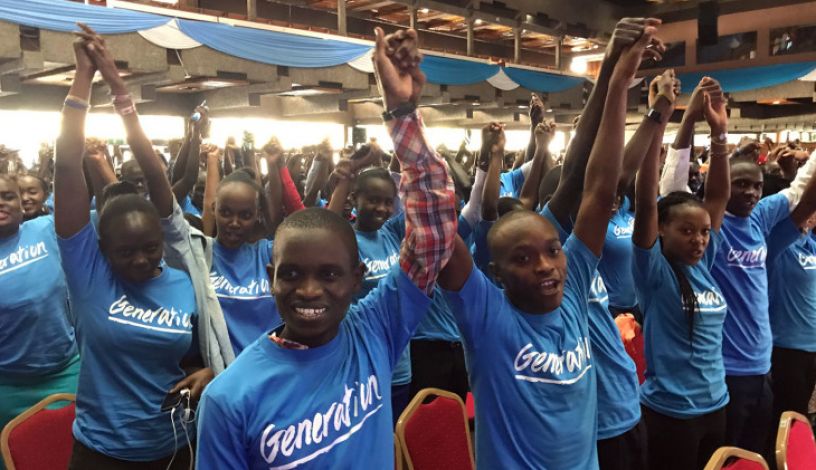 In January 2021, Uganda’s general elections saw incumbent President Yoweri Museveni re-elected into power, along with new parliamentarians, local council, city and division representatives. Despite controversy, one thing was made undeniably clear to audiences around the world: the role of young people in Uganda’s political landscape is changing. Andrew Ewoku reflects on what youth participation in politics looks like after decades of exclusion.

Like most countries in the region, Uganda has a young population; the last census, carried out in 2014, found 78% of the total population were under the age of 35, and 20.6% of the population were between 15 and 24 years old. In politics, young people make up nearly half of all registered voters with approximately 6.4 million young voters under 30 years of age.

However even with their strength in numbers, young people in Uganda face huge economic, political and social challenges. According to the World Bank, while about 700,000 young people reach working age every year in the county, on average only 75,000 jobs are created annually. This has resulted in cumulative frustration due to tough economic conditions and a feeling of missed opportunities to make it in life.

“The youth are not empowered and are disorganised” – a statement often used to tactically isolate young people as they search for empowerment.

Young people we spoke to state they do not feel represented by government and feel disconnected from their leaders. Despite around 30% of MPs under 35 years of age and five youth-specific positions at parliamentary level – four regional and one national chairperson – it is clear that there are not enough youth representatives in the government, and their interests are not well understood. They also express distrust towards government elites who use youth issues to gain support and advance their own interests, while doing little to address legitimate concerns. The young people blame this disconnect on older generations who dissuade youth from participating as electoral representatives because of their inexperience.

Stemming from financial hardship, young people often feel that they do not have the resources to engage actively in a political context that has become increasingly monetised. Without financial backing and a high profile, it has become almost impossible to draw attention and votes in Uganda. To some, it is no longer about the strength of ideas or policies, but how well one can pay for votes or use money to protect votes during elections. This has left young people disillusioned towards joining politics, particularly in areas of low income and scarce employment opportunities.

For many young people, the current government has been in power for most of their lives and therefore feel like they have little power to affect national politics. This perceived lack of influence has led many young people to focus their resources on local rather than general elections, as they see more tangible outcomes in voting for their MPs and Local Council representatives. One young voter explained: “Last election, I voted for the president and nothing happened, but for [my local] MP, I changed the leadership.”

A change in direction

Despite feeling disillusioned, the recent general elections saw a change in young people’s political engagement. A case study from Wakiso district in central Uganda  ̶  an urbanised region which saw youth participation increase during the elections period, from campaigning to voting  ̶  illustrates this change. This led to a number of young aspiring politicians, including some with no financial backing, to join the race and make their vision for Uganda seen. As a result, young candidates took 80% of elective positions across the 24 districts of central Uganda, toppling many older career legislators.

What made the situation in central Uganda different to the rest of the country? One aspect is the role of social media in mobilising people to join politics, which took precedence in this year’s elections. Specifically, many young people used social media to mobilise support for opposition parties. But use of social media varies across the country, particularly in rural areas where young people have decreased access, therefore limiting their exposure to online voter mobilisation and their chances of participation.

At the same time, greater northern Uganda is a region with entrenched legacies of conflict that has left communities displaced and without formal identification, meaning young people are unable to participate in civic engagement including voting. For those that are able to partake, their priorities revolve around meeting their day-to-day needs, rather than challenging the status quo.

Similarly, young people in low income urban settlements often feel excluded from formal processes and are more likely to resort to violence to voice their discontent at government.

In order to address these diverse challenges, effective youth engagement strategies must be built on the context of each region in Uganda and take into consideration the specific barriers faced by certain communities that limit their engagement, including lack of internet access to voter ID registration. Despite this year’s increased youth engagement in central Uganda, broad participation must be encouraged across the country to ensure the voices of the most marginalised are represented.

To strengthen the political representation of youth in politics, authorities, schools and civil society must work to address the economic and civic limitations that impede their capacity to participate meaningfully in politics. This means economic empowerment, addressing the underemployment and unemployment problem, as well as increasing youth participation in other non-political organisations to acquire the necessary civic skills for political engagement.

At school level, programmes such as debating clubs, students’ councils, patriotism clubs that nurture political representation and leadership ambitions at an early age should be revitalised. Competitions on current affairs and regular participation in political events, such as House of Parliament sit-ins, can provide opportunities to voice youth concerns in the community.

Conversations around electoral reform continue to be important. Along with a need for accountability and transparency in electoral processes to build trust with younger voters, it is crucial to strengthen pre-election civic education, particularly in conflict-affected and low income regions of Uganda where young people have less access to information.

Saferworld works with communities, civil society organisations and district sub-county level government to encourage young people and build their skills to participate meaningfully in peaceful political processes and social movements, and express their opinions. We also work across ethnic and economic divides to unite communities and young people who bear some of the brunt of historical conflicts, to work towards transitional justice. When supported correctly, young people are able to play active roles in conflict prevention and peacebuilding.

It is untrue to believe that young people are not empowered - being youthful in itself is power. This year we saw young people use their voice to edge their way further into Uganda’s political landscape despite the challenges they face. We look ahead to future election processes to see how young people will use this increased visibility to meet their needs. 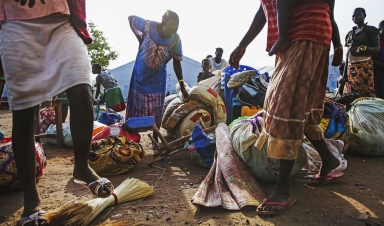 Andrew Ewoku is Saferworld’s Advocacy and Communications Manager in Uganda.