Saferworld is joining a diverse group of US-based and international organizations in urging President Biden to end the lethal targeting program, which has failed to address the root causes of violent conflict and has exacted an appalling toll on Muslim, Brown, and Black communities in multiple parts of the world.

“Military-centric responses to violence and insecurity haven't achieved peace. They've killed civilians, played into the hands of violent groups, and made conflict and instability worse. The proof is evident across the world where violent actors have only increased in number since 9/11.

President Biden knows it is time to change course on the counterproductive strategies of the last twenty years and invest big in the alternatives of diplomacy, peacebuilding and development. The people we work with in conflict zones want to see the US use its power to end suffering. Unless the administration ends its reliance on harmful policies, like the lethal strikes program, the alternatives will not take root.”

Read the letter below:

We, the undersigned organizations, focus variously on human rights, civil rights and civil liberties, racial, social, and environmental justice, humanitarian approaches to foreign policy, faith-based initiatives, peacebuilding, government accountability, veterans’ issues, and the protection of civilians. We write to demand an end to the unlawful program of lethal strikes outside any recognized battlefield, including through the use of drones. This program is a centerpiece of the United States’ forever wars and has exacted an appalling toll on Muslim, Brown, and Black communities in multiple parts of the world. Your administration's current review of this program, and the approaching 20th anniversary of 9/11, is an opportunity to abandon this war-based approach and chart a new path forward that promotes and respects our collective human security.

Successive presidents have now claimed the unilateral power to authorize secretive extrajudicial killing outside any recognized battlefield, with no meaningful accountability for wrongful deaths and civilian lives lost and injured. This lethal strikes program is a cornerstone of the broader U.S. war-based approach, which has led to wars and other violent conflicts; hundreds of thousands dead, including significant civilian casualties; massive human displacement; and indefinite military detention and torture. It has caused lasting psychological trauma and deprived families of beloved members, as well as means of survival. In the United States, this approach has contributed to further militarized and violent approaches to domestic policing; bias-based racial, ethnic, and religious profiling in investigations, prosecutions, and watchlisting; warrantless surveillance; and epidemic rates of addiction and suicide among veterans, among other harms. It is past time to change course and start repairing the damage done.

We appreciate your stated commitments to ending “forever wars,” promoting racial justice, and centering human rights in U.S. foreign policy. Disavowing and ending the lethal strikes program is both a human rights and racial justice imperative in meeting these commitments. Twenty years into a warbased approach that has undermined and violated fundamental rights, we urge you to abandon it and embrace an approach that advances our collective human security. That approach should be rooted in promoting human rights, justice, equality, dignity, peacebuilding, diplomacy, and accountability, in action as well as words.

This letter has been signed by 113 organisations, both US-based and international:

Warpod Reckoning with 9/11 episode 2: Into the land of bones 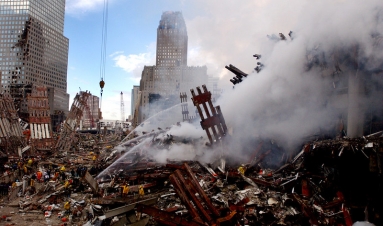