Turkey has become a more visible global actor over the  past decade. Its growing aid budget, which made it the world’s third largest humanitarian donor in 2013, has increasingly been focused on conflict-affected states. Since 2011, through the deployment of high numbers of aid workers to Mogadishu, the Turkish government and Turkish non-governmental organisations (NGOs) have markedly expanded aid operations in Somalia.

Through a joint research project with Istanbul Policy Center (IPC) conducted in 2014, Saferworld has sought to explore Turkish aid to Somalia and understand what the implications might be for peace and stability in Somalia. Described by Somali stakeholders as tangible, visible and of high impact, aid from Turkey has been broadly welcomed. Nonetheless, as the experience of other international donors over the past two decades has shown, aid can have unintended effects for peace and conflict in Somalia. Alongside providing an overview of Turkey-Somalia relations, the research has identified the ways in which aid from Turkish agencies has been at risk of unintentionally fuelling conflict dynamics.

Recommendations have been identified for how both official and civil society aid agencies can address these risks and capitalise on existing opportunities to contribute to lasting peace in Somalia. The research also includes a specific set of recommendations for policymakers seeking to further develop the Turkish government’s foreign policy concept of humanitarian diplomacy.

The full report, Turkish aid agencies in Somalia, presents an in-depth analysis of the research, which is summarised in the briefing Turkey and Somalia: Making aid work for peace.

Read more about our work on rising powers and peacebuilding.

“An explicit focus by official and non-governmental Turkish aid agencies on making aid work for peace could represent the next progressive step in the evolution of Turkey-Somalia relations.” 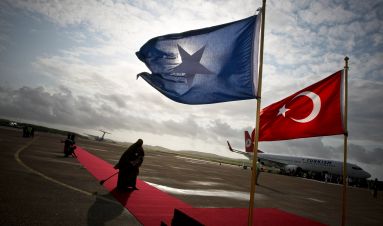