What some call vandalism, others call street art. For the organisation ‘Young Lawyers of the South’ based in Osh, Kyrgyzstan, street art is not a destructive pastime, but rather an effective way of communicating with the public through art. One of their recent initiatives was designed to build trust between the police and the communities they serve by communicating improvements in trust and police services to a broader, sceptical public.

Police in Kyrgyzstan do not have a good reputation among the people. They have been linked to cases of torture, unprofessionalism or neglect of duty. A poll conducted in 2014 by the Civic Union – a network of non-governmental organisations promoting police reform in the country – showed that less than half of citizens polled trusted the police, perceiving them to be disciplinarians rather than service providers. This lack of trust creates a gap, so that even when people are in need, they do not seek police assistance, opting instead for other sources of help including from their families, clans or sometimes even from criminal groups. A further lack of available information about the work of police because of a closed institutional culture only worsens how they are perceived.

To address this lack of trust and encourage communities to make use of police services when they are in need, Saferworld and partners have supported efforts to improve police services, such as through community policing forums and the establishment of local crime prevention centres that link up police and communities so that they can jointly tackle safety and security concerns. Yet these improvements will have little effect if people do not turn to the police in the first place. To encourage this change in public behaviour, police must work together with communities to challenge, punish and eradicate harmful police practices, deliver an improved service for all sections of the public and reach out to different communities to overcome the current distrust. Street art is one way of highlighting the positive side of police work that is accessible to all and in particular is a medium embraced by young people. 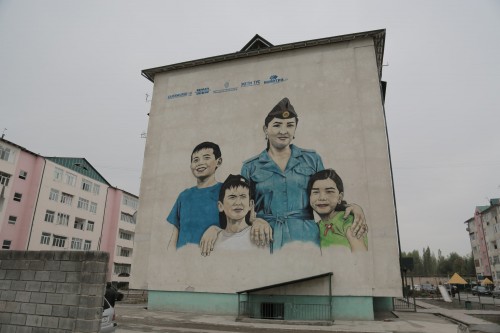 “Without the support and trust of the community, the police cannot do anything,” said Colonel Bakyt Israilov, Head of the Community Security Department of the Police Directorate of the South. “We become powerless. That’s why it’s important for projects like this to bring communities and police together – to overcome their disagreements and discuss issues that affect their lives on a daily basis.”

Young Lawyers of the South also worked to build contacts and cooperation between police and those they serve. The organisers of the campaign took a multi-pronged approach – by producing a film about the role of the police, creating street art in three neighbourhoods of Osh, and organising a photo exhibition and drawing competition for schoolchildren focusing on children's own perceptions of the police. It was the first attempt of this kind to improve relations between the Osh city police and the communities they serve. Raising public awareness of how the police work has contributed to increased understanding and cooperation between police and communities. According to community surveys, this increase in transparency has in turn allowed people to hold police accountable for their actions.

“Our police work 24 hours a day, seven days a week, to ensure public order, peace and tranquillity,” said Mirlan Adilbekov, the coordinator of the project. “Street art could help create an image of law enforcement agencies as those who serve the people. That way, people will be more willing to take advantage of their services when they’re in trouble, which is an important first step.”

The four-month campaign in Osh captured the attention of many in Kyrgyzstan and has become an example for the rest of the south of Kyrgyzstan for its use of innovative methods.

Residents are largely supportive of efforts to bring police and communities together. “This shows us that the police are making an effort to work with us, and not just for themselves,” said one resident. “And I am starting to believe it”.

This activity sits within a broader programme of work by Saferworld and partners to support the national police reform process in Kyrgyzstan, focusing on promoting progressive changes in the law enforcement system. This is accomplished through building the capacities of police, communities and civil society to institutionalise the types of relationships and behaviours required for successful people-centred security provision in the country.

Learn more about our work in Kyrgyzstan.