In 2020, we supported the National Organisation for Community Development (NODS) to work with communities in Taiz, Yemen to end a 30-year conflict over water distribution. We look at this historic achievement led by women in Sabr al-Mawadem district. This case study is based on a video report of the project (in Arabic), produced by Almushahidnet.

Since the 1980s, residents of al-Shaab, al-Adouf, and al-Amiqa villages in Taiz have disputed the distribution of water from the al-Siwari well, which serves over 6,800 people. After the conflict between communities of al-Shaab and al-Adouf escalated in 2011, the issue reached the national government but failed to meet an agreement. Tensions reached boiling point when violence erupted and residents began destroying the 7,200 metre water pipe network connected to the well. Countless litres of water were wasted and communities were without easy access to water for more than eight years.

“Women and children were the most affected by this conflict. They bore most of the repercussions and struggled as a result. Children had to wake up early in order to fetch water from other areas. So they were often either late to school or too tired and exhausted to go to school afterwards” explains Walaa’ Bashir, one of the contributors to the mediation project. Women also had to travel long distances to get water, and suffered the additional financial burden of having to pay for it.

In October 2019, community action groups were established by NODS, with support from Saferworld, as part of a project* to help women and young peacebuilders address problems in their community. The Sabr al-Mawadem group identified the ongoing water dispute as a major cause of conflict. Speaking about the project, Shaynaz al-Kuhli of NODS explains, “Our main objective is to build the skills of young people through launching training programmes on leadership, advocacy, conflict resolution, drafting project proposals, and identifying projects that address the most important problems for them.” Last year, we saw trained community members and activists lead projects that included renovating disused health facilities, repairing street-lighting and running COVID-19 awareness campaigns.

Ten women of the Sabr al-Mawadem action group living in affected villages were among the first to raise attention to the issue. Initially, the communities were sceptical. Walaa’ explains, “They were telling us that the village leaders have not been able to resolve the conflict for almost 15 years. They asked, ‘how can you, as a group of young university graduates resolve the conflict?’… We had to show and prove to them that women have a role in conflict mediation.”

After holding initial discussions with local leaders and authorities, the group devised a plan of two stages based on previous attempts to resolve the conflict. First, they would liaise with technical experts to clean and fix the water source from the al-Siwari well in al-Amiqa village, to allow for an increased flow of water to al-Shaab and al-Adouf villages. The second step was to set up a ‘support committee’ involving members of the community action group, as well as other civil society figures to organise mediatory meetings among the leaders of al-Shaab and al-Adouf to agree on an appropriate distribution system for the water network. They also organised wider community dialogues to ease tensions between residents and met with sheiks from local mosques to raise awareness of the issue during Friday prayer sermons with printed brochures. The support committee also visited several INGOs in search for funding for the next stage of the project to carry out repairs to the water network as agreed with both al-Shaab and al-Adouf communities. 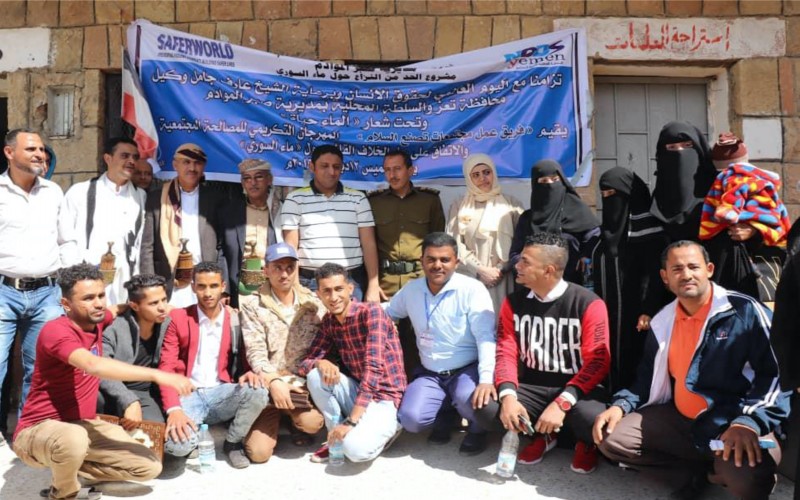 The action group come together. ©NODS

Over the course of ten months, mediation talks continued. Given the historical nature of the conflict, tensions at one point escalated to gunfire and more community members became involved to push for a peaceful resolution. The women reminded both communities of the opportunity to fix the destroyed water network and improve their daily lives. They also demanded that the local government and leaders respect the efforts of women to bring peace. Gender roles in Yemen often restrict women from participating in decision making in public life, making their efforts even more challenging. Men in the communities initially paid little attention to the women’s experiences of the conflict and their suggestions to solve it.

“We shocked the men in our village – when myself and the other women entered the hall [where the mediation took place]. We heard the tension increase and voices became loud. ” Explains Siham Bashir, another project member. The Sheiks present then said, “Out of respect for the women in our village attending, we must start with a calm and purposeful discussion.” Gradually, the men began to welcome the women’s input to the point where they were leading the discussions.

Finally, in October 2020, a settlement was reached which allows the water to flow evenly between al-Shaab and al-Adouf villages. The agreement was recognised by authorities and communities were invited to meet at the house of a local sheikh to establish a follow-up committee to work on the smooth implementation of the agreement. The women peacebuilders and community action group members went on to form the ‘Peace &

Development Community Initiative,’ which continues to seek funding to complete the reparations of the destroyed waterpipe network. 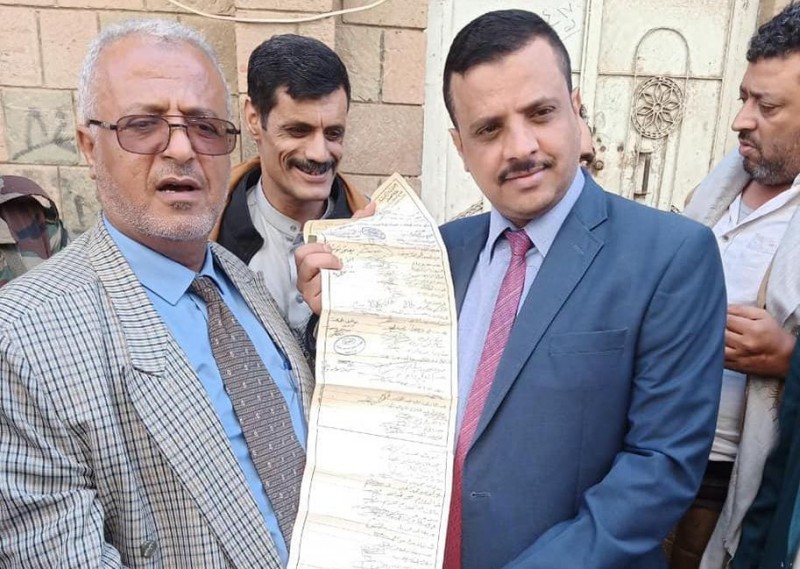 This historic achievement of resolving a decades-long conflict is testament to what civil society groups can achieve when given resources and support to address conflict. The communities involved were eager to make the most of opportunities to fix damaged infrastructure with the support of donors and used this as motivation to ease disagreements. Supporting a community-led initiative also opened up space for women, young people, people with disabilities, displaced people and other marginalised groups to have ownership of solving a long-standing problem.

“My message to all women is to never stop or give up. To never reach a point of saying ‘alright I have done my job, that should be enough’. We have to continue working in order to complete our project.” Walaa’ concludes.