Cooperation or competition? China and Russia in Central Asia

The recent launch of the Asian Infrastructure Investment Bank highlights China's economic and strategic ambitions, and will accelerate its economic expansion into Central Asia. As geopolitical dynamics shift, Ivan Campbell considers whether relations between China and the traditional regional hegemon, Russia, are likely to be characterised by continuing pragmatic cooperation or growing competition.

On June 29 delegates from 50 countries gathered in Beijing for the signing ceremony of the Asian Infrastructure Investment Bank (AIIB). The Chinese-led initiative is being seen as a diplomatic and strategic success for China, with this new multilateral financial institution set to provide an alternative to the World Bank and Asian Development Bank. Its creation was motivated in part by Chinese frustration at its under-representation and lack of influence in the existing international financial architecture, which remains dominated by Organisation for Economic Co-operation and Development (OECD) countries. However, despite opposition from the US, several of its allies – including the UK, Germany and Australia – have joined the AIIB as founding members.

The establishment of the AIIB reflects the shifting balance of global economic power from west to east, and it is expected to advance China's broader economic expansion. Intended to fund Asian energy, transport and infrastructure projects, the AIIB will support the reorientation of China's economic policy from domestic infrastructure development to infrastructure development beyond its borders. In addition, it ties in with China's periphery diplomacy and will enable China to engage more proactively, and to develop closer relationships, with other Asian countries – or as President Xi put it, to “turn China's neighbourhood areas into a community of common destiny”.

The launch of the Chinese-led AIIB is particularly significant when viewed from the perspective of Central Asia. It is likely to reinforce Chinese trade and investment in the region, which has already expanded massively in recent years. In 2013 President Xi signed deals worth a reported US$100 billion with four Central Asian states, and this came on top of a one hundred-fold increase in trade between China and Central Asia since the break-up of the Soviet Union. The AIIB supports China's vision of inclusive trade and transport integration in Eurasia, embodied in the concept of the Silk Road Economic Belt. The vision includes rail, road and air links, as well as energy pipelines. Financing will come from China's Silk Road Fund, as well as the AIIB and the Shanghai-based BRICS New Development Bank.

What are the implications of these developments for the five Central Asian states: Kazakhstan, Kyrgyzstan, Tajikistan, Turkmenistan and Uzbekistan? For much of the time since the break-up of the Soviet Union, the international community has viewed Central Asia as a region of risk and potential instability. This has been compounded by the chronic violence and insecurity affecting neighbouring Afghanistan. As a consequence, international engagement in the region over recent decades has been underpinned by a concern to contain conflict risks and to shore up state stability, despite significant concerns about governance and human rights.

One view is that having regarded Central Asia primarily through the lens of security – especially in relation to Afghanistan – the major powers are increasingly shifting their focus to the region's economic potential. Henceforth international engagement will be driven as much by the desire to tap the markets and resources of Central Asia as by concerns about conflict risks and instability. China has led this reorientation of approach through the Silk Road Economic Belt, AIIB and similar instruments, but it can be seen also in terms of the Russian-led Eurasian Economic Union (EEU), the US New Silk Road Initiative, and India's Connect Central Asia policy.

The potential benefits for Central Asian states, in terms of increased trade, investment and connectivity are clear – but equally there are risks arising from increased economic intervention when one considers conflict dynamics within the region and broader geopolitical trends. There is a range of threats to peace and stability both within and between the five Central Asian states. These include poor governance, weak rule of law, ethnic divisions, competition over water and land resources, drug-trafficking, and widespread poverty. There are particular concerns that conflict could be triggered by the eventual presidential successions in Kazakhstan and Uzbekistan when those changes come. Add in the threat of violent spill-over from Afghanistan, especially following the withdrawal of the International Security Assistance Force (ISAF), and the fragility of peace and stability in the region is all too apparent.

The geopolitical significance and abundant resources of the Central Asian region have long made it attractive to great powers, and thus the locus of strategic competition. China and Russia will increasingly be the principal players on this stage, especially after the final ISAF drawdown. As China steps up its engagement in Central Asia, it will inevitably affect local conflict dynamics. It may well create great opportunities for economic development in the region, but it also risks exacerbating existing inequalities or provoking local tensions. China's growing presence and influence in the region – despite being outwardly benign and focused on economic integration – has created unease about its longer-term intentions. Chinese attempts to lease tracts of land in Tajikistan and Kazakhstan, for instance, have generated considerable antipathy towards China among local populations.

Russia is the traditional regional power in Central Asia and, despite its diminished influence in the post-Soviet era, it remains the pre-eminent military and political actor. Thus far, Russia and China have co-existed relatively harmoniously in the Central Asian space, and appear keen to maintain a show of good relations – for example, President Xi's seat next to President Putin at the Victory Day parade in Moscow in May 2015. And China has appeared content to cede pre-eminence to Russia when it comes to matters of direct involvement in the politics or security of Central Asian states. However, Russia is inevitably apprehensive about China's economic expansion, especially given that China overtook Russia as Central Asia's number one trading partner in 2010. Furthermore, Russia is likely to be watching China's military modernisation programme with concern, as this will allow it to develop and project new capabilities in its border areas, including Central Asia.

Another important consideration is Russia's increasingly assertive stance in the former Soviet space. Recent events in Ukraine, and before that in Georgia, have been viewed by many as Russia seeking to reassert a dominant role in its former sphere of influence. The significance of Ukraine events for Central Asia should not be over-stated, but the repercussions may be far-reaching. Russia could potentially apply the same intervention logic – to protect ethnic Russians or identified Russian interests – to other states in its neighbourhood. This has caused unease in neighbouring regions, including Central Asia. Taken together with Russian attempts to engage the region in a closer economic embrace through the EEU, there are concerns that Russia will seek to reassert itself here too.

The AIIB represents a significant new element in the geopolitics around Central Asia. In some quarters, there are concerns about a new superpower axis between China and Russia – based on flourishing trade, growing military cooperation and shared geo-strategic interests. But equally their respective aspirations may set these two powers on an eventual collision course. Central Asia represents an important test-case. How the dynamics of China's economic expansion on one side of this fragile region and an increasingly assertive Russia on the other play out will shape the future of Central Asia and prospects for peace and stability.

In 2013-14 Saferworld undertook research into China's growing engagement in Central Asia, as well as the changing role of Russia. We analysed how this affects – and may affect in the future – the regional economic and security context. In a new report we consider how the relationship between Russia and China in Central Asia is likely to evolve – whether one of continued pragmatic cooperation or of increasing rivalry and possible conflict. The report launched today, in Chinese, Russian and English language versions, summarises the findings of Saferworld's research and the implications for peace and stability in Central Asia.

Read Central Asia at a crossroads

Ivan Campbell is Senior Conflict and Security Adviser at Saferworld.

“There are concerns about a new superpower axis between China and Russia...but equally their respective aspirations may set these two powers on an eventual collision course. Central Asia represents an important test-case.” 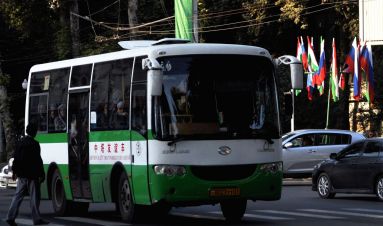 Central Asia at a crossroads