Making sense of the EU as a foreign policy actor is not straightforward; it is often dismissed as overly complicated or irrelevant. This is a mistake. Recent policy developments point to concerning trends in Europe (and elsewhere) that have implications well beyond the community of bureaucrats, practitioners, journalists, researchers and activists working in the ‘Brussels bubble’. Saferworld’s Brussels representative Kloe Tricot O’Farrell explains these evolving trends and why alternatives are urgently needed. This article originally appeared on EurActiv.

Unprecedented numbers of migrants reaching Europe’s shores and the threat of terrorist attacks in European capitals have led migration and counter-terrorism to dominate the agendas of the EU and its member states. Problems which used to be dealt with ‘over there’ are now having direct impacts on domestic politics ‘over here’. Coupled with austerity and a growing scepticism of the benefits of globalisation, fear and uncertainty have reinforced populist, ultra-nationalist and xenophobic voices in European politics and forced those in power to demonstrate their resolve in responding to domestic concerns. In turn, realpolitik, short-term and security-focused interventions are being prioritised over principled, long-term and people-centred approaches to global security.

The recently published Global Strategy for Foreign and Security Policy, which sets out the core interests and principles that will inform EU external action for the years to come, highlights the increased emphasis on domestic interests in foreign policy decision-making. While the strategy stresses the importance of conflict prevention and human security, and recognises the importance of promoting peace and stability beyond EU borders to ensure its own security, it also emphasises the need for development policy to be more flexible and aligned with strategic priorities. This is indicative of a wider risk; that commitments to alleviate poverty and promote peace will be discarded or used as a cover to secure short-term strategic objectives.

Development resources are already being allocated to support migration management efforts as well as preventing violent extremism (PVE) interventions, which now qualify as Official Development Assistance (ODA). Perhaps more troubling, however, are EU initiatives to provide ‘train and equip’ support to security actors, including the military, in third countries “in pursuit of development policy goals”, referencing the Sustainable Development Goal (SDG) 16 on ‘peaceful, just and inclusive societies’. Specifically, in a legislative proposal to extend the scope of EU assistance toward this end, it is argued that “not addressing critical operational needs of partners hampers the achievement of essential objectives for development, i.e. to foster conditions for peace and human security.”

While the EU recognises the importance of promoting human rights, the rule of law as well as democratic and good governance principles, reliance on train and equip programmes to foster peace and development raises several concerns. For one, the aim of development cooperation should be to promote people’s well-being, which may in turn support national security. When the former is explicitly subsumed by the latter, both aims become more distant. The most significant priority under SDG16 is to promote peaceful societies. In addition, the Goal 16 target relating to institutional capacity building emphasises the need for them to be ‘effective, accountable and transparent.’ Training and equipping governments who lack the political will to undergo meaningful reforms and improve public security will not advance this priority. Strengthened but unreformed security sectors lead directly to less peaceful societies, more displacement and terror. Despite this, the EU is in danger of prioritising the institutional capacity of third countries, regardless of whether they are taking responsibility to change the conditions (which they may have created) that have led to insecurity or instability.

A clear example of this is the EU-Horn of Africa Migration Route Initiative, also known as the Khartoum Process, which was established as a forum for political dialogue and cooperation on migration with countries from the Horn and Eastern Africa. Through the Better Migration Management (BMM) project, the flagship project of the Khartoum Process, the EU will provide trainings, technical assistance and equipment to enhance the capacity of state institutions in countries such as Ethiopia, Eritrea and Sudan to manage migration and tackle human trafficking and smuggling. These are states that have consistently failed to protect human rights or provide means for people to hold security actors accountable. At different times, they have been directly responsible for serious human rights violations, for instance during the peaceful Oromo protests which the Ethiopian government brutally supressed or aerial bombardment committed by the Sudanese government against civilians in Southern Kordofan.

Not only is it dangerously counter-productive for the EU to be building these states’ coercive capacities in the absence of commitment for reform or space for public engagement, but by shifting responsibility to these countries to manage the flow of migrants to Europe, the EU is in essence providing these repressive regimes with a cloak of international legitimacy at a time when more scrutiny on their domestic policies is needed. As EU approaches prioritise addressing the symptoms of the European migration crisis, rather than the root causes of the conflicts and instability driving displacement, there is a real risk that they will do more harm than good for people on the ground. Furthermore, this engagement is governed by the EU Partnership Framework with third countries under the European Agenda on Migration. Published in June 2016, the Partnership Framework calls for increasing coherence between migration and development policy, leveraging EU and Member States’ external cooperation to stem migration to Europe, noting in particular that “there must be consequences for those who do not cooperate on readmission and return.” Again, this points to the use of development aid as a foreign policy lever to secure domestic priorities, instead of it being based on sustainable and humane responses to the needs of the world’s poorest and most vulnerable.

EU responses to migration and terrorism, and more broadly global insecurity, should not come at the expense of its commitments to promoting democracy, the rule of law, human rights and fundamental freedoms. At a time when national governments are becoming more hard-line and exclusionary, it is all the more important that a supra-national body like the EU rises above domestic interests and continues to champion the rights of the poor and oppressed wherever they live. But this is about more than principles: there is little evidence that these approaches will prove effective, especially in the long-term. On the contrary, there is ample evidence of the pitfalls of developing toxic partnerships and using aid in pursuit of statebuilding objectives. Genuine peace is underpinned by justice, inclusion and political freedoms for all; the EU and Member States must prioritise achieving this peace rather than unsustainable ‘stability’ enforced through securitised states that are ultimately responsible for conflict and instability.

The reality is that domestic political considerations will continue to inform the EU and Member States’ interventions for the foreseeable future. The responsibility will now fall to the peacebuilding, human rights and development communities to persuade decision-makers that they can do much better for people both in and beyond Europe.

Find out more about our work with the EU.

“EU responses to migration and terrorism, and more broadly global insecurity, should not come at the expense of its commitments to promoting democracy, the rule of law, human rights and fundamental freedoms” 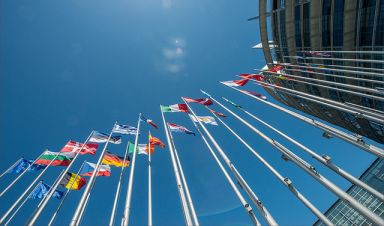