Produced for Yemeni TV, this short film by Support Yemen and Saferworld raises awareness of the issues surrounding women and the security and justice sector in Yemen.

Women have an essential role to play in linking the security forces with communities, helping the security sector become more gender-sensitive and ensuring that internal police procedures promote equality and fairness. Yet social norms and traditional prejudices are challenging women’s capacity to work within the sector, particularly as police and prison officers.

Featuring interviews with staff from the police, the Reform and Rehabilitation Authority, and the Ministry of Interior the film highlights the need for a more responsive security sector, which is developed through reform processes that include women’s perspectives and respond to women’s specific security concerns.

Presenting the experiences of male and female security personnel, the film describes women’s contributions to security forces, the opportunities available to them, and their hopes and impressions about society’s influence on women’s capacity to take part in building security in Yemen. As Colonel Abdullah al-Hakim, General Director at the Care Reform and Rehabilitation Department at the Reform and Rehabilitation Authority states: “When policewomen worked with women, the results were very positive”.

This film was made by Saferworld partners Support Yemen an independent media collective of young Yemeni men and women.

“When policewomen worked with women, the results were very positive” 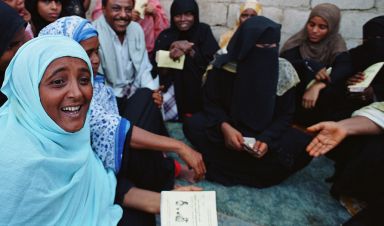