As a four-year participatory photography project in Bangladesh draws to a close, Bangladesh Project Officer G.M. Shoeb Ahmed discusses the challenges and successes of the project.

Tell us about the participatory photography project.

To bring out the lived experiences of safety, or the lack of it, for people in those communities, we included a participatory photography element. We gave cameras to 25 people – including youth, women, minority groups, and the project staff of our local partner BRAC – to document local safety and security concerns in their communities. After an initial three-day training in Jessore, which included sessions on story-telling through photos; safety; how to use the cameras; lighting; and portrait images, participants went back to their local communities to take pictures. We were interested both to see what participants would take images of and also whether those images would change over time as the project progressed and communities sought to develop action plans to address their security concerns.

What types of images did the participants take?

The images have reflected a fairly wide set of safety and security concerns that the community groups have been working on, ranging from photos of individuals, groups, communities and also social settings. The issues they documented included drug and alcohol abuse, gambling, dowry disputes, violence against women, ‘eve teasing’ (the sexual harassment of women as they go about their daily lives), injustice, political violence, environmental pollution, child labour and early marriage. Participants also took images of their work and women’s empowerment, local government meetings, and meetings with religious leaders and security providers. In this way it has been interesting to see the progression of relationships between communities and authorities through the images.

Interestingly, participants also took images of safety concerns stemming from environmental issues. For example in Satkhira waterlogging – the stagnation of water that is used for bathing, drinking and farming due to flooding – is a particularly dangerous problem that impacts the health, hygiene, travel, food production and food security of local villages. The area is prone to natural disasters. They are still recovering from the 2011 flood, 2009’s Cyclone Aila, and 2007’s Cyclone Sidr, which all severely damaged infrastructure and left many areas waterlogged, depriving people of their income and water source. 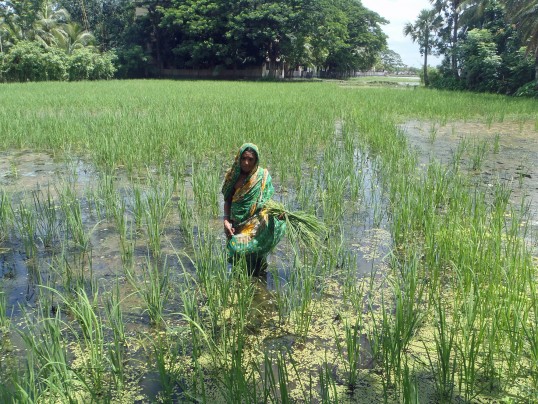 In Labsha, Satkhira, the community action committee – a group set up as part of Saferworld’s programme who work together to resolve local security issues – decided to prioritise addressing the problem of waterlogging. The group mobilised the wider community, explaining that if the issue wasn’t addressed it would affect food production and ultimately food security, which could lead to tensions between people. More than 1,000 volunteers worked together to dig the soil and remove sand from the mouth of the sluice gate – which in part was causing the problem.

The initiative has improved food production and encouraged neighbouring communities outside the project to set up their own community action committee. It has also improved communication between community members and the local administration, and improved CAC members’ skills and confidence and it was great to see the project work documented. 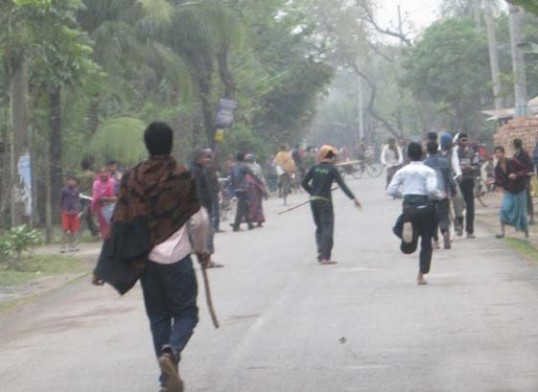 This photo by participant Altaf Hossain, also a journalist and therefore documenting the issues for his local newspaper, shows political unrest in Satkhira, a district that has been badly affected by political violence. Satkhira is home to anti-government forces and has experienced repression and destructive activities since 2012. During outbreaks of violence, some areas were blocked by the anti-government forces, meaning law enforcement had less power to move and take any action against the perpetrators of violence. Many roads were deliberately destroyed and damaged to stop patrol cars.

Ward 9 saw political violence in the run-up to and during the elections, including picketing, vandalism and arson by ‘outsiders’ from other communities attempting to block the main road to Khulna. Police were arresting youth perceived to be responsible for the violence, but the CAC soon identified that innocent youth from their own ward were being mistakenly accused for the violence, and decided to take action. They liaised closely with the local administration, police and the Rapid Action Battalion to help identify the perpetrators of political violence and prevent further violence.

While the CAC did want to address issues related to political violence in the run-up to the elections – prior to this drastic escalation of violence during the elections – they found it very difficult to work on such a sensitive issue.

How did you ensure the photography would be done in a sensitive way?

During the initial training we agreed that the participants’ safety and security was extremely important. We communicated to participants that they should take photos of what makes them feel safe, and therefore should not take photos without people’s permission, and should not take photos that could put anyone in danger. But we did find this aspect challenging; participants were very enthusiastic about taking images of safety and security issues that mattered to them. So it was really crucial that we continued to have meetings with participants as part of our broader community security programme support.

After nine months we also ran a refresher training project to reiterate to them the safety aspects of taking images given the subject sensitivity. We were also very clear to let the local authorities and police know about the photo project. The wider community security initiative aims to build relationships between communities and authorities so it was important authorities felt comfortable with the project. Overall there was a real need to be aware of risks throughout the project and monitor this.

How do you feel the photography project has contributed to the wider aims of the community security programme?

The project involves members of the community, security providers and influential local leaders (such as the Union Parishad chairman and the Upazila Parishad chairman) and gives them a sense of ownership of the community security programme more broadly. The photo project has made participants much more motivated; their photos were shown at district-level, national-level and international-level events, which was a really proud moment for the photographers. It also really brought to life the issues the project has been working to address, getting people to think about the photos and want to work more on these issues.

The project has increased the impact of the wider community security programme, as photo project participants are working jointly with community action committees who assess communities’ safety issues and make plans based on these issues. Participants say their photos provide evidence of the problems, and that they could be used to raise awareness about these problems.

Have you noticed the impact on youth involved in the photography project?

We have probably noticed the most changes in young people’s behaviour and attitudes. Through the project they have taught themselves which photos will be informative and helpful for the community and how photography can bring about change. The project has allowed them to really develop their interpersonal skills, especially with regard to being sensitive about asking people for consent to take photos of them.

After receiving the training and cameras, youth participants felt empowered to work for the community and felt a sense of ownership. They shared their work with local leaders, elected representatives, policy practitioners and administrations and arranged photo stalls to raise awareness about the project and its aims.

What have been the biggest lessons learnt from the project?

We’ve learnt that documenting issues visually can empower communities to be vocal about the security issues they experience – especially as the photos serve as evidence of the problems facing communities, therefore making the issues harder to ignore. Participatory photography is an innovative technique in the development sector and helps people think differently about how changes are happening. As well as providing evidence of issues that need resolving, the photos show how communities are making progress towards becoming safer; for example a photo of village life returning to normal after political violence.

We also learnt that having something visual and physical meant participants could monitor and evaluate their progress and have something practical to show what they’d learnt over the course of the project. 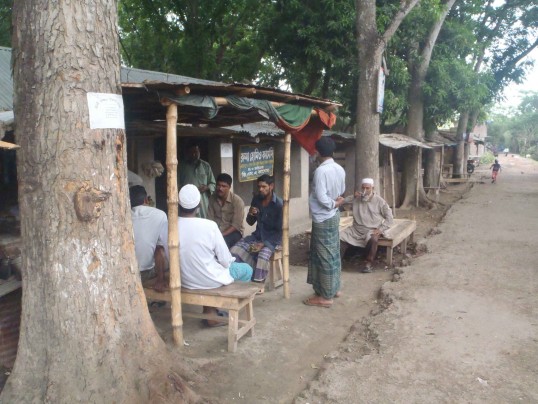 “Documenting issues visually can empower communities to be vocal about the security issues they experience.” 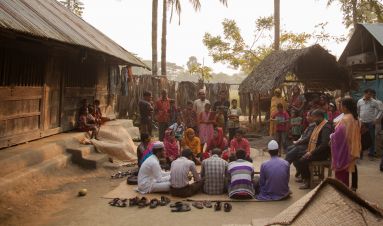