Keeping the SDGs on track: did the 2017 UN High-Level Political Forum do its job?

As the dust settles after last week’s UN High-Level Political Forum (HLPF), it begs the question: is the process for reviewing progress on the Sustainable Development Goals (SDGs) on the right track? Saferworld’s delegation at the HLPF, which included representatives and partners from our Somalia/Somaliland programme, attended the forum with the hope that it would allow for genuine dialogue, present an accurate picture of progress, and ensure accountability for UN Member States. In my view and that of other observers it fell well short of these expectations.

The HLPF – the official mechanism for reviewing progress on the 2030 Agenda – is supposed to ensure member states, civil society, the UN and other actors can track progress (or lack of it) towards achieving the SDGs. For those working on SDG16 for peaceful, just and inclusive societies – an important addition to the new development framework – this review and accountability mechanism is especially significant.

This year, we saw many of the same shortcomings as at last year’s HLPF.

Civil society inclusion – progress still to be made

After noting concerns over civil society inclusion last year, we hoped this year’s HLPF would be more open. There were improvements this year – including the opportunity for civil society participation in official sessions, seats for Major Groups in each session, and travel support by the UN for civil society representatives from countries that presented voluntary national reviews (VNR) of progress. Yet the HLPF remains part of the ‘New York bubble’, with few opportunities for civil society to contribute meaningfully to debates.

The 2030 Agenda aims to ‘leave no-one behind’, yet civil society from conflict-affected and fragile states (CAFS) – which made the least development progress during the Millennium Development Goals (MDG) era – have next to no voice at the HLPF. Most glaringly, civil society from CAFS were largely absent during initiatives focusing on SDG16+, and not sufficiently heard during the wider HLPF. The 2030 Agenda is universal – but the commitments to reduce violence, provide access to justice and more inclusive decision-making matter most in CAFS, where citizens face the greatest challenges from insecurity, injustice and poor governance. The failure to allow civil society from CAFS to have a voice is a missed opportunity for using the SDGs to catalyse change in these countries, as well as to be a ‘lever for change at the global level’.

That said, different stakeholders did get a look-in at this years’ HLPF: a youth civil society representative took part in the Dutch delegation’s VNR presentation. Presentations by Belgium, Cyprus, Czech Republic, Denmark, Italy, Nigeria, and Slovenia also included civil society – but they made up just 8 out of 44 countries presenting. Active civil society participation in the HLPF’s official sessions is critical and other member states should adopt this approach. However, to ensure it is more than window-dressing, there should also be meaningful consultation by governments with civil society when VNR reports are being developed.

Despite some positives, the VNRs this year left much room for improvement. As World Vision and Together 2030 point out, a member state’s VNR should cover its implementation of the whole 2030 Agenda – not just focus on the few SDGs that are up for global review each year.

During the negotiation period, and in the early years of implementation, a number of member states have warned against ‘cherry-picking’ – i.e. choosing to focus on particular goals rather than the whole agenda. Ironically, some of those same member states who warned against cherry-picking submitted VNRs with a narrow focus on a handful of their preferred SDGs. Brazil, for instance, despite its high homicide rate, didn’t report on SDG16 progress in its VNR – all the more surprising given its involvement in the SDG16+ Pathfinders initiative.

What’s the deal with data?

The UN Statistical Commission and ECOSOC have adopted the SDG indicator framework, partly assuaging fears about the dilution of the global accountability mechanism. Safeguarding and adopting this framework will be key to measuring progress on the SDGs. Efforts to collect data on these indicators continue at national level, but there is still no clear commitment to using non-official data. An over-emphasis on the role of national statistics offices (NSOs) and relative disregard for non-official data producers will provide a partial picture of progress and undermine credibility.

More positively, some member states are using non-official data in their official systems. At an HLPF side event on how to measure peace, the Colombian government shared its method of vetting and integrating non-official data into official sources. Such innovative approaches show how governments can work with CSOs to complement their reporting, while building a nationally-owned system.

The fact remains that there are still massive data gaps for the SDGs, as was highlighted at the launch of the SDG16 Data Initiative’s 2017 Global Report. For instance, there is still no agreement on the size of global illicit arms flows due to the lack of comprehensive data on arms trafficking and illicit flows, which by definition are not reported. This adds to widespread under-reporting or refusal to report on other sensitive issues, including many of the SDG16 indicators. The result is that SDG16 data at present fall far short of telling the true story of progress.

The future credibility of the HLPF

Last year we argued that the HLPF should become a more dynamic and inclusive forum that enables genuine dialogue between relevant actors about progress and challenges in achieving the SDGs. After four years at the UN, I am under no illusion that this will happen overnight. The UN’s hierarchal system and bureaucracy tend to obstruct new approaches or challenges to the perspectives of member states. This is why the SDG framework, which was developed inclusively and articulates a universal agenda for change, is so important. Yet this year, some member states backtracked on vital commitments to gender equality under SDG5 (targets 5.3, 5.6 and 5.a).

Over the course of the ten-day HLPF, civil society voiced frequent frustrations with the current format, and it is imperative that these concerns are addressed when new modalities for the HLPF are agreed in 2019. There is still scope and opportunity for the HLPF to become a meaningful forum for engagement and dialogue between member states and civil society. For this to happen, civil society frustrations should be channelled into a collaborative push for a better process in 2018, which brings national civil society actors much more into the picture. One participant proposed that civil society should boycott the HLPF unless offered greater space and voice. Certainly, civil society actors – and all concerned with their inclusion in the HLPF process – should set out red lines for continued engagement, and form more effective coalitions to exert pressure for a fuller, franker conversation on what progress is really being made towards achieving the SDGs. 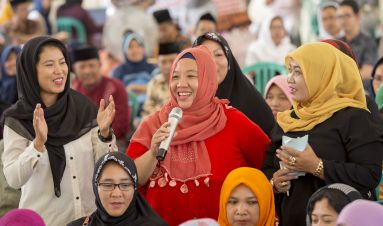 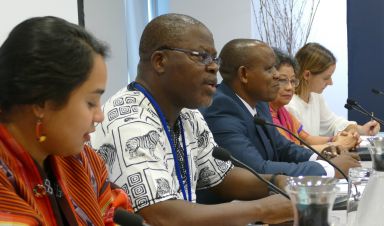 All talk, no action? Disrupting the way the UN reviews the SDGs 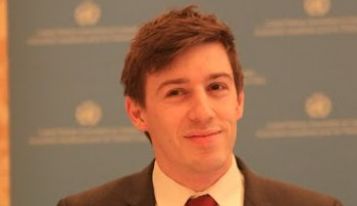 As Saferworld's Policy Coordinator, Jordan works on global peacebuilding issues with a focus on the UN and Sustainable Development Goal 16.