Somalia's war can't be won militarily: time to give peace a chance

For over a decade, the Somali government and its international allies have sought to eliminate al-Shabaab militarily. But they have reached a stalemate in which civilians bear the brunt of the violence and destruction. As Joanne Crouch explains, it’s high time to consider alternatives.

Ever since al-Shabaab’s rebellion emerged against the UN-backed government in Somalia, diplomats and government officials have relied on military tools to tackle the threat. Having initially pushed the group back, the conflict has become a military stalemate. Continued military action is unlikely to secure a decisive victory, and al-Shabaab’s violence appears to get worse under military pressure. To have any hope of ending the suffering, the government and its international allies should rethink traditional ‘counter-terror’ tactics, and instead explore a peacebuilding approach that prioritises the safety and security of Somalis.

Since 9/11, governments have promoted heavy-handed tactics to stamp out violent groups like al-Shabaab, while remaining sceptical about other ways to end the violence. Al-Shabaab’s elaborate attacks in Mogadishu and elsewhere are bitter reminders of its ability to inflict death and destruction, and of its resilience in the face of repeated military campaigns. Despite heavy investments into the African Union Mission in Somalia (AMISOM) and Somali security forces, for more than a year neither they nor al-Shabaab have made headway. If both sides continue as they are, the conflict could drag on without resolution for years to come.

Moreover, the Somali government and international partners know they cannot sustain this strategy forever. Officials often stress the need for more funding to defeat the group, but donor fatigue has made this no more than wishful thinking. Structural challenges of corruption and resource mismanagement also complicate the daunting task of transforming the Somali National Army – a job that will inevitably take time.

Continued reliance on a militarised approach may worsen rather than reduce al-Shabaab violence. To promote an effective response, it is vital to understand al-Shabaab’s motivations, worldview and reasoning – or what has been called its ‘logic of violence’: armed groups act in line with their own particular logic, and are driven by a survival instinct when under pressure; in this fight for survival, they tend to meet violence with violence in increasingly brutal ways.

In al-Shabaab’s case, the threat of elimination is a powerful motive for it to attack Somalia’s armed forces proactively, control territory, raise funds through harsh taxation, recruit children into its militias, control people’s movement, and kill civilians perceived to support the government.

Al-Shabaab’s members justify its violence using Islamist ideology, but if one sets the question of ideology aside, it is striking how much the group’s behaviour resembles that of other armed insurgencies around the world. It uses terror to invoke fear and project strength, undermine confidence in the government, extract money and resources to sustain itself and its soldiers, exert control over communities, and clamp down on dissent.

Al-Shabaab’s violent behaviour is underpinned by political objectives, and when faced with elimination it will fight all the harder to ensure survival.

If counter-terrorism could be feeding this tragic logic of violence, what other strategic options are available for moving forward? The first step is to shift the analytical and strategic framework for engagement. Counter-terror focuses on ‘defeating’ a group, in this case al-Shabaab. Given the decreasing likelihood of defeating the group, the priority should be exploring all available avenues for working towards a durable peace. Focusing on peacebuilding would bring new priorities to the fore: reducing violence, protecting civilians and providing justice and security for communities.

The second step would be to explore all options for dialogue to resolve the conflict with al-Shabaab.

Its violence and connections to al-Qaeda have cemented its pariah status and the militarised counter-terror response. It has also shrunk appetites for political engagement on all sides. But there are now increasing calls to explore the feasibility of a political solution. Our reveals significant support for doing so among Somalis.

Any peace process would have to navigate several huge challenges – for example, how to achieve justice for past victims and human rights protection in the future. Similarly, even if the government were to shift away from military responses, could part or all of al-Shabaab be convinced to abandon violence and embrace politics? This may only be possible after patient trust-building on all sides and deeper understanding of the interests of all parties to embrace non-violent politics. Importantly, however, there are indications that some members of al-Shabaab are also tired of the violence, and wish to see a better governed Somalia, could mean that there is now interest in meaningful dialogue.

A third step would be to invest much more time and resources into understanding and addressing the needs of Somalia’s long-suffering communities. A significant reason why al-Shabaab retains influence is that many Somalis see its provision of justice and security and its mediation of clan interests as more effective than those of the government. Only by providing Somali communities with a better security, justice and development offer can the situation be turned around.

At present the military strategies of the Somali government, its allies and al-Shabaab all place a greater importance on the control of territory, populations and financial flows than on civilian welfare and conflict resolution. A rigid focus on ‘defeating’ al-Shabaab will only perpetuate conflict and keep both the government and Somali citizens trapped within a situation of unending violence and unresolved grievance. The time has come for Somalia to explore alternative ways to end this war.

Joanne Crouch is Saferworld’s Somalia research team leader and has been conducting research in Somalia to explore alternatives to the counter-terror approach to tackling al-Shabaab. The work has engaged government officials, international diplomats, policymakers, Somali analysts and community members. It builds on research in 2017 exploring Somali community perspectives towards the conflict and specifically towards al-Shabaab.

Read our report on counter-terror and the logic of violence in Somalia's civil war. 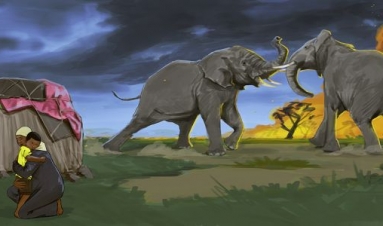 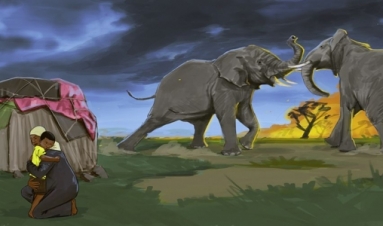 Summary: When the elephants fight, the grass gets trampled