We spoke to our Yemen Country Manager, Awfa al-Naami, about how women are facing systematic attacks, internet blackouts and restricted freedoms.

Can you tell me about women’s activism in Yemen at the moment?

It’s a difficult and complex situation right now. Activism in Yemen is on standby. Activists – especially women – are facing many difficulties: security, access to information, and access to decision makers. The war has overshadowed their role.

Different groups harass and marginalise women in their daily lives and spaces. As one Yemeni activist (who asked not to be named) told me: “I currently coordinate a project to strengthen protection mechanisms [at a women’s centre]. People referred 340 cases to us. We were stunned by the amount of suffering and violence that women are subjected to. Firstly, the deprivation of resources, which generates...psychological, verbal and physical violence. Working on those cases put us also in danger. We had to close many cases without solving them to protect the women in the centre.”

In the north, Ansar Allah (the Houthi movement) does not allow any projects related to empowering women, or anything to do with ‘activism’. There are systematic attacks on women in general and anyone who is representing women in society. So those who are in the spotlight – let’s say [women] in the media or social media influencers, journalists, humanitarian workers – everyone is under scrutiny from Ansar Allah. There is the case of a Yemeni model being prosecuted and sentenced to five years in prison. We don’t know what her charge was: some suggested she was a spy; some said she was attacking Yemeni women’s identity. All this is making women afraid to step up and talk. Ansar Allah is suppressing women’s movements – they are requiring women to have a male chaperone (mahram) even for humanitarian workers going to work in places like Ibb, Hajjah and Sa’ada. There’s a lot of new regulations restricting women and girls’ freedoms, like preventing their use of smartphones in some locations. There’s a huge attack on women and, of course, activists can’t do much in this hostile environment. The situation is similar in the south. Many conservatives are welcoming these new trends and looking at this as ‘saving tradition’ – which it’s not. But that’s the narrative being perpetuated on social media, and it’s a pervasive one for an audience with limited access to other media.

Some women’s focus right now is on high-level politics, such as the peace process. But what’s often missing here are the voices of women facing daily barriers and threats – to their security, their place in society and their livelihoods. It’s grassroots women’s organisations who are dealing with a lot of what we talked about [above] – as women and as freedom defenders. These organisations don’t have access to the required funding and unfortunately donors and agencies are often more focused on the humanitarian situation than on what needs to be done socially for peace and reconciliation and for future generations of Yemeni women. Women-led organisations are facing restrictions in funding and on what topics they can work on. They also need flexible funds for capacity building, security budgets, gendered budgets (that consider the different costs women need such as childcare and suitable transport), and sustainability funds. As they’re trying to survive, and within the limited dangerous space that they have – most of their work is not as gender transformative as we want to see.

All that sounds difficult and challenging. First, for someone who isn’t familiar, what do we mean by gender transformative? Second, how do Saferworld and our partners fit into the context you just described?

We [often] look at gender in terms of numbers. For example, most gender projects are looking at how many women benefited from this project and that’s sometimes the limit of it. What we want [beyond numbers] is a sustainable change in the perception of women’s roles in society, and change in the collective and individual behaviours generated by harmful norms, practices, and structures. In simple words, it’s about changing the views of society as a whole – women, men, decision-makers – on the reciprocal relationship between women and society. And changing the systems that were created to support harmful practices that lead to inequity and injustice.

What Saferworld is doing right now is trying to give our platform to activists’ voices. We’re trying to link up these grassroots activists with international spaces. Too often, working on gender issues is seen as a Western ideology, so we are working to shift the focus from an international audience towards a Yemeni audience. We are focusing our advocacy in Yemen to change society based on what Yemeni women want, the language they use, the work being done by Yemeni activists. That will give Yemeni women the oxygen they need to change the norms and structures that are threatening their security and capability to work in social and political spaces. Those are our top priorities.

The other thing is to get more donors and institutions to look into the specific needs of women’s rights organisations. The need for flexible systems and grants. Saferworld and the Women’s International League for Peace and Freedom (WILPF) are currently piloting a core and flexible funding model for women's rights organisations with UK government support, and we hope to share learning on it soon. Also, we are trying to shed light on how the decisions taken by international organisations are affecting women. For example, how is permissing the maharam chaperone requirement [mentioned above] going to affect all women, not just women working for humanitarian agencies? We’re also working with our partners and networks for more gender-transformative approaches and ways of doing our work and projects.

If you were a donor, what would you change, or do first?

If I was a donor, my priority would be to support Yemeni women reclaiming their freedom to think, live, own their own decisions and be active citizens again, by focusing more on projects aiming for future change. Sure, humanitarian and relief projects are vital and necessary, but these projects are only addressing the ‘now’ – the problems at hand. But what defines us as human is thinking and planning ahead. These projects must be designed and owned by Yemenis in Yemen – civil society organisations (women-led ones in particular) need to have the tools and systems that allow that to happen. It is contradictory logic when we ask civil society organisations to implement ready-to-go projects, based on an already-defined call for proposals and without consulting Yemeni organisations or communities – treating them as implementers while they alone face the risks. How can we empower society when we are disempowering the middle link between donors and ‘beneficiaries’?

What’s the one thing you wish more people knew about the conflict in Yemen?

Power dynamics in Yemen are determined by more than those parties engaged in war. International humanitarian interventions in Yemen have also had gradual, subtle effects. Unfortunately, sometimes these are negative, giving more power to people opposed to women’s rights. I hope there will be more sensitivity in dealing with the different parties – there is a big difference between impartiality and indifference.

Finally, internet access has been increasingly unreliable. With COVID-19 moving more things online, we had hoped that more people from Yemen would have the opportunity to take part in global events. But because internet speeds – already among the worst in the world – are even worse than before the war, Yemenis (especially outside the major cities) are facing huge barriers – barely able to speak in online meetings, for example. These are massive issues that women-led organisations are facing.

I read that Yemen is one of the worst places to be a woman according to Amnesty. But I couldn’t be prouder to be a Yemeni woman. I’ve worked with Yemeni women from all different backgrounds: women with disabilities, marginalised women, freedom defenders, humanitarian workers, housewives, doctors, teachers, philanthropists and businesswomen. I’ve found nothing but strong will, determination and commitment to make the best of the day for a better future. We will continue rebuilding and nurturing the just and peaceful communities we deserve. Because that’s who we are.

This interview is also available in Arabic. 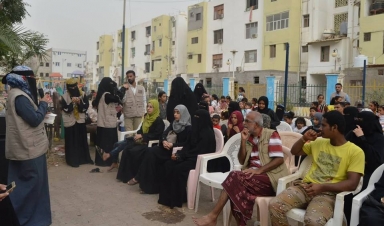