Between principle and pragmatism

We are witnessing a “revolution in the global order” and China is leading this revolution. In the West, analysts and policy makers are grappling with what China’s rise means for international relations and the spectrum of foreign policy concerns. In China itself policy makers are also coming to terms with this new found influence and the responsibilities that come with it. A critical issue will be what happens as China and other rising powers make their presence increasingly felt in countries where peace is precarious. The risk is that conflict issues may be aggravated, leading to instability and even the return of violent conflict. But equally, China’s increasing engagement offers opportunities to consolidate peace.

This report is one of the main outputs of a 12-month research project that examined the implications for peace and stability of China’s increasing engagement in conflict-affected states. The report is based on research in Nepal, Sri Lanka, Sudan and South Sudan, and contributes to the evidence base about how China’s rise will affect conflict-affected states. It is meant not only to raise awareness, but also to encourage policy makers to engage with the new realities, including how they can respond to the changing context for international efforts to promote peace and stability.

The report includes in-depth case studies of the specific contexts of Nepal, Sri Lanka, Sudan and South Sudan. These can also be downloaded as separate documents.

Read the full report: China and conflict-affected states – between principle and pragmatism

“China’s approach to development and peacebuilding diverges in significant ways from the liberal democracies of Europe and North America...China’s involvement in, and engagement with, developing and conflict-affected countries isn't necessarily inimical to a ‘Western’ approach [but] its growing presence in these countries suggests the need for a more careful understanding of Chinese perspectives and approaches.” 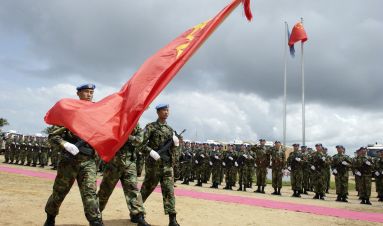 China and conflict-affected states: towards a more co-operative approach